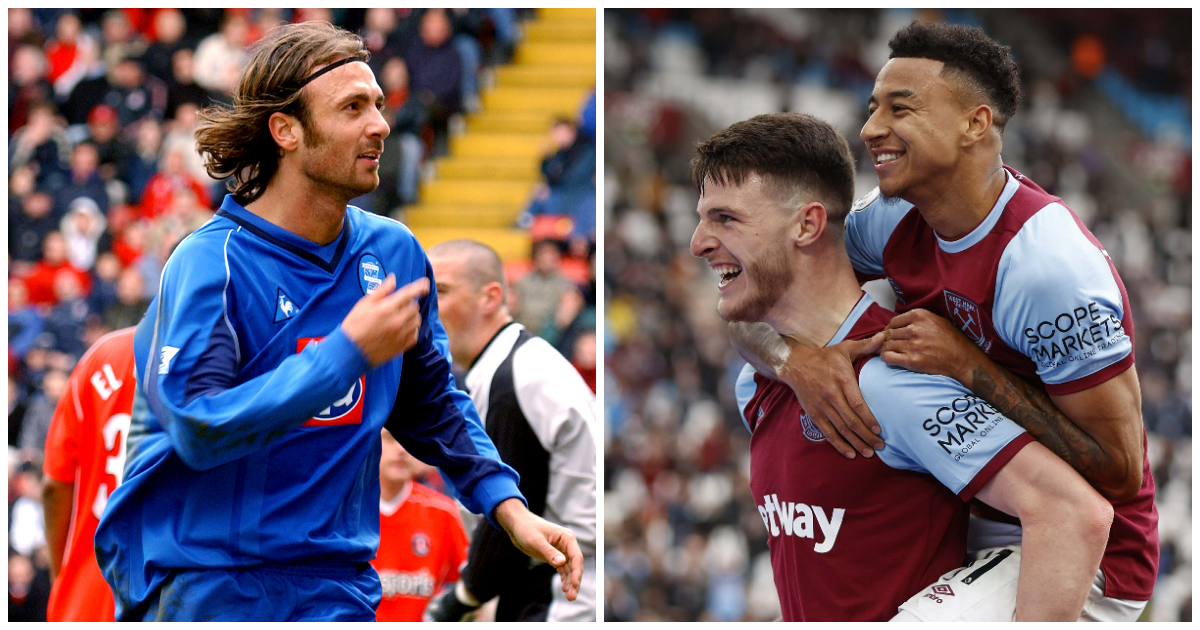 After giving you examples of some pointless January loan signings, we have picked out six mid-season loanees who helped define a Premier League club’s season…

Give those weird deals a read, won’t you?

Christophe Dugarry to Birmingham
In January 2003, World Cup winner Dugarry decided to join relegation-threatened Birmingham City on loan. Blues manager at the time, Steve Bruce, admitted the Frenchman was “the biggest signing” in the club’s history. Expectations were high and he did not disappoint.

Birmingham were 16th in the league and five points above West Brom in 18th when the France international moved to St Andrew’s, and he wasn’t part of a winning squad until his sixth game – a 2-1 win over Liverpool. His first goal came on matchday 33 in a must-win match against Sunderland, helping the Blues to a 2-0 victory. His Premier League goal against the Black Cats opened the floodgates as Dugarry went on to score four more before the season came to a conclusion.

The experienced forward scored a beautiful goal in a 2-0 win at Charlton a week later, before a brace against eighth-placed Southampton helped seal a 3-2 victory. His last goal that season came against Middlesbrough, a wonderful volley after beating the offside trap set City on their way.

Birmingham finished 13th after the addition of Dugarry helped them win seven out of nine between February 23 and April 26.

Jesse Lingard to West Ham
The first of two 2021 January loan signings, Lingard joined West Ham after falling down the pecking order under Ole Gunnar Solskjaer at Manchester United. The attacking midfielder had not played a single Premier League minute, meaning Solskjaer was happy to let him leave on loan, 18 months before his Old Trafford contract expired.

There was uncertainty surrounding what sort of player the Hammers had agreed to sign on a temporary basis. Happy-go-lucky Lingard wasn’t enjoying his football – because he wasn’t playing any – and it is safe to say he is a bit marmite-y, meaning a lot of people expected (and probably wanted) him to fail at the London Stadium.

A big grin returned to Lingard’s face in his very first match. West Ham won 3-1 at Aston Villa and the Red Devils loanee scored twice. West Ham were definitely in the race for a European spot, and that soon became a proper sprint to finish inside the top four. Lingard scored nine and assisted five for David Moyes’ side in 16 appearances, guiding the London club to a sixth-place finish.

Without Lingard’s goals, this would not have been possible. If it wasn’t for a dip in form which saw the Irons lose three in four, they would have beaten Chelsea to a Champions League place.

Another positive part of this story is that the 29-year-old returned to the England squad after being nowhere near it. He was included in the preliminary Euro 2020 selection, but narrowly missed out on Gareth Southgate’s final team for the tournament.

Kevin Campbell to Everton
Technically, Campbell joined in March, which absolutely is not January, but he was really good at Goodison Park and joined mid-season, so we’re counting it whether you like it or not.

When Campbell signed on loan from Trabzonspor, Everton were 16th in the Premier League and relegation was a distinct possibility. Going into his third game in blue, the Toffees had slipped into the bottom three and fans weren’t too optimistic about having the former Arsenal striker at Goodison Park. However, Campbell scored his first two goals for the Merseysiders as they beat Coventry at home.

Campbell became the first loanee to win Premier League Player of the Month after following up his brace against the Sky Blues with another double in a 3-1 win at Newcastle and yet another two-goal haul as the Toffees beat Charlton 4-1.

Everton’s safety was all but secured after the experienced striker’s six goals in three games. His final strikes of the season came against West Ham. Fed up of scoring braces, Campbell bagged a hat-trick in the 6-0 mauling of the Hammers, meaning he scored nine in eight for the Toffees, playing a more than gigantic role in keeping the club in the top flight. Frank Lampard might be in touch.

Joe Willock to Newcastle
Signed in the same season as Lingard, Arsenal youngster Willock made the move to St James’ Park to help Steve Bruce’s side stay in the Premier League. Picking up some first-team experience was also part of the plan, but Willock had played his last match for the Gunners after impressing Newcastle so much that Mike Ashley coughed up £25m to sign the midfielder permanently last summer.

Willock was struggling for game time under Mikel Arteta, being limited primarily to Europa League group stage appearances against Dundalk and Molde. A loan move made sense for Arsenal, Willock and Newcastle, who were under stingy ownership.

Upon his arrival, the Magpies were 17th in the Premier League. His debut could not have gone much better, scoring after 16 minutes as Bruce’s side beat Southampton 3-2. However, the Geordies did not win again until April 11, when Willock was an unused substitute. He had scored an 85h-minute equaliser against Arsenal’s arch-rivals Tottenham the week before, but did not come on against Burnley at Turf Moor. His goal against Spurs was the first of seven consecutive matches in which he found the back of the net.

Strikes against West Ham, Liverpool, Leicester, Manchester City, Sheffield United and Fulham helped Newcastle finish 15th and comfortably avoid the drop – the St James’ faithful had fallen in love with someone who didn’t belong to them.

Much like Lingard, Willock joined his temporary club and left having helped them achieve their ultimate goal, winning over the club’s fans in the process. West Ham didn’t bite the bullet and sign Lingard, but Newcastle did with Willock. The 22-year-old joined for £25m and has zero goal contributions in 19 matches this term. This begs the question: have the Toon been hoodwinked by a purple patch?

Robert Huth to Leicester
It isn’t always about attacking players, you know? Of course, when looking back on a team avoiding the drop, it’s easy to focus on who scored the goals, but defenders can contribute even more.

Huth was at Stoke and couldn’t get a look in, playing three minutes of Premier League football for the Potters before joining Nigel Pearson’s side on loan until the end of the season. The big German walked straight into the starting XI and started every single game for which he was available.

Leicester’s situation was a lot worse than Newcastle’s with Willock, Birmingham’s with Dugarry and Everton’s with Campbell. They were bottom and looked absolutely f**ked. The Foxes lost three and drew two of Huth’s first five games and relegation looked all the more inevitable.

Finally, Huth tasted a Premier League victory with his new team as they beat West Ham 2-1 at the King Power thanks to an 86th-minute Andy King winner. They then won 3-2 at West Brom despite being a goal down with ten minutes left. The ex-Chelsea defender netted the equaliser and Who Else But Jamie Vardy scored an injury-time winner. It was time for the Foxes to really kick on, riding the momentum wave created at The Hawthorns.

Leicester won another two to make it four in a row and they were finally off the foot of the table, only to be humbled at home to Chelsea, who slapped the Foxes back down to 20th. Wins and clean sheets against Newcastle and Southampton helped them out of the relegation zone, before a 0-0 draw at Sunderland secured their safety. What better way to end one of the greatest escapes in Premier League history than the 5-1 thumping of QPR, who incidentally finished bottom.

Huth signed permanently that summer and the rest is history.

Jurgen Klinsmann to Tottenham
Back to reality, it’s time to go on about another attacking player scoring goals to save a team from the drop.

Klinsmann had surprisingly joined Tottenham from Monaco in 1994 and enjoyed one great season at White Hart Lane before being snapped up by German giants Bayern Munich. He scored 29 goals for Spurs in 94/95 as the north Londoners finished seventh and reached the semi-final of the FA Cup.

He returned to the Premier League halfway through the 97/98 season with Spurs hovering just above the relegation zone. His first goal in his second stint at the club came in a 1-0 win over London rivals West Ham before scoring again in a 3-3 draw at home to Liverpool. Les Ferdinand, David Ginola and Klinsmann inspired the Lilywhites to a relatively strong finish.

The German legend continued his fine form in wins against Crystal Palace, Newcastle and Wimbledon, scoring four in a 6-2 win against the latter. Thankfully for the north Londoners, the addition of Klinsmann helped fight off relegation, finishing 15th on 44 points, four points above 18th-placed Bolton.