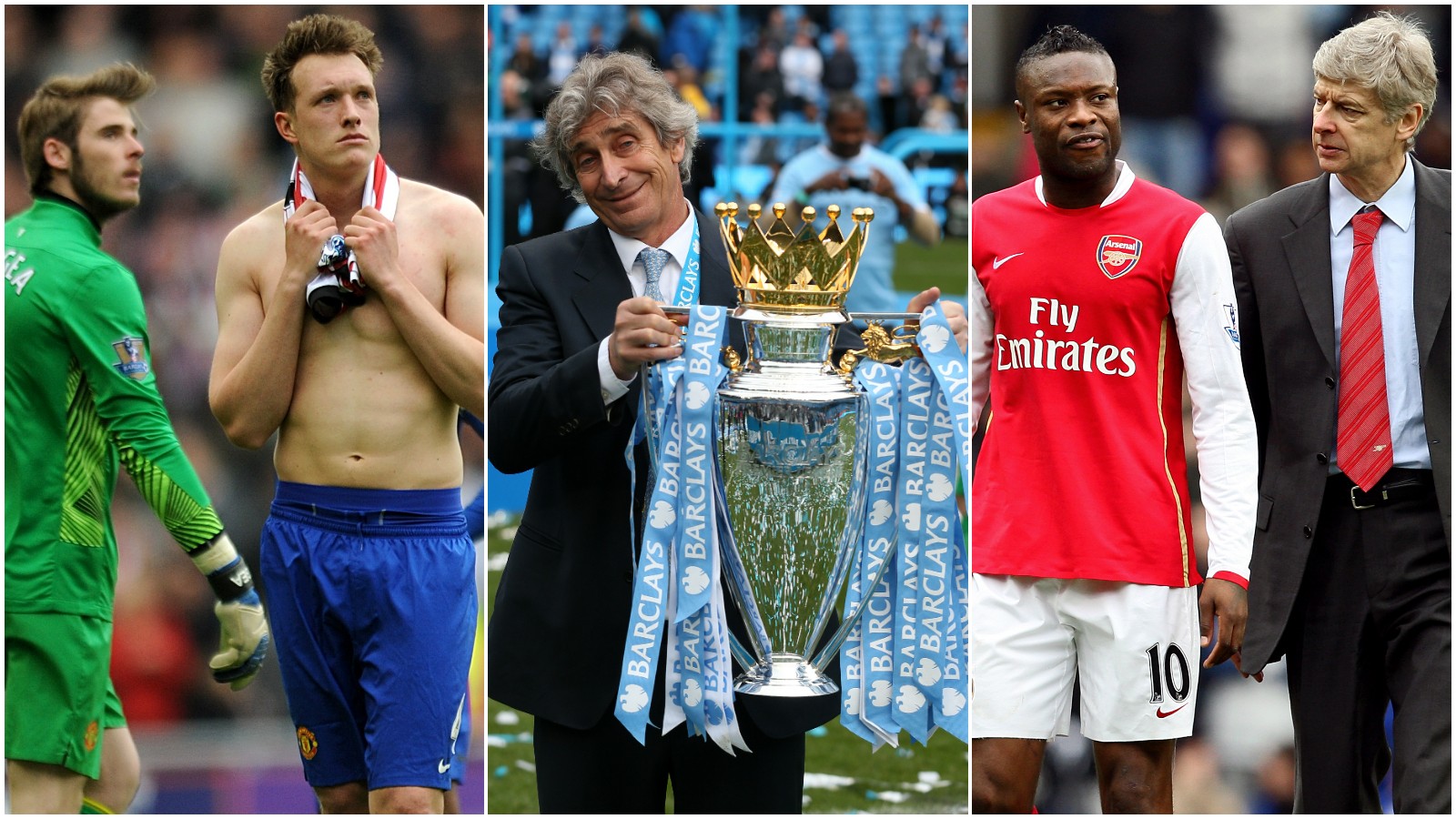 Manchester City are just one point ahead of Liverpool at the top of the Premier League with nine games to go. Only six times has a Premier League title race been as tight as this at this stage of the season.

For the sake of simplicity we’ve gone with the number of points accumulated by every side after they had played 29 games (or 33, for the early 42-game seasons), even if in reality there were games in hand at play.

Some other title races have ended up finishing tighter, but we are interested here in what the gap between the top two sides was with nine games to go. Let’s roll…

6) 2009/10 – Chelsea (64) and Manchester United (63)
Neck and neck going into the final few games, the two exchanged positions a few times but ended up both taking seven wins, one draw and one defeat from their final 10 games of the season.

United took the early advantage in the run-in when Chelsea drew 1-1 away to Blackburn in their 30th game, but the Blues flipped things back the other way with a 2-1 win at Old Trafford three games later.

Joe Cole and Didier Drogba struck either side of half-time, which meant Federico Macheda’s late goal was not enough for the Italian to rescue the title for United for the second year running.

United emulated Chelsea by only taking a single point away from Ewood Park the following week, giving Chelsea the luxury of being able to lose away to Tottenham and still take the title by winning their final three games against Stoke, Liverpool and Wigan by an aggregate score of 17-0.

5) 2007/08 – Manchester United (67) and Arsenal (66)
Arsene Wenger’s Arsenal were top with 10 to go, United claimed top spot with nine left to play, and both clubs took it in turns to try and hand each other the title, leaving the door open for Chelsea (64 points) in the process.

Arsenal drew with Wigan, United drew with Blackburn, and the pair of them both drew with Middlesbrough.

In the end it all came down to the head-to-heads, and that’s why Arsenal ended up finishing third. They took the lead away to both Chelsea and Manchester United in their 31st and 34th games respectively, but both times ended up losing 2-1. If they had beaten United, they would have been champions. But they didn’t, the idiots.

Chelsea ended up giving United no margin for error in the final two games of the season by beating them by the 2-1 scoreline that was apparently all the rage in 2008. But they were fine with that, strolling to wins over West Ham and Wigan to claim the title.

Initially it looked like City had muffed it by drawing 1-1 away to Stoke, 3-3 at home to Sunderland, and losing 1-0 away to Arsenal, while Ferguson’s side continued to absolutely kill it.

Then came United’s own stumbles: in game 33 they lost 1-0 away to Wigan, and two games later David Moyes carried out the first part of his two-year plan to utterly destroy the club by leading Everton to a ridiculous 4-4 draw at Old Trafford.

Vincent Kompany’s goal was then the difference in the super-crucial derby at the Etihad, restoring parity going into the final two games of the season.

You know the end of this story: it’s the Aguerooooooo goal, Phil Jones’ poor little crestfallen face, all that business. God it was great, wasn’t it?

Like this season, it was already a two-horse race, with City and Liverpool 10 and nine points respectively ahead of third-placed Spurs when matchday 30 came around.

But by then, the decisive moments had already been and gone. The week before, in game 30, Jurgen Klopp’s Liverpool were held to a goalless draw in the Merseyside derby at Goodison. That slip saw the Reds fall from the summit for the first time in three months, allowing City to go top.

Then, incredibly, not a point was dropped between Klopp and Pep Guardiola’s sides. From 54 points available, a ridiculous 54 were taken, taking the race all the way to the line, with City battering Brighton 4-1 on the final day to secure another title.

That was despite Liverpool losing only one game all season – a 2-1 defeat at the Etihad which was the second of a 19-game run in which City won 18 matches. Had the Reds won at City in their first game of 2019, they would have been 10 points clear. Even a draw would have kept them seven points clear but, instead, Leroy Sane’s winner saw City kickstart their title campaign and put their foot down until the finish.

This wasn’t quite yet the indomitable United we would come to know – Ferguson’s side had been without a league title for 26 years and had blown up the season before so there was no overriding sense that they would almost always find a way to prevail. Quite the opposite.

Villa actually seized the early advantage on the final straight of this 42-game season, beating Sheffield Wednesday as United stumbled to a 1-1 draw in the derby at Maine Road.

Norwich slipped out of the race with a run of four defeats in six games, and Villa ceded their lead to United with a goalless draw at home to Coventry in game 37.

They never got it back. Though Atkinson’s side responded with back-to-back wins over Arsenal and Manchester City, the pressure seemingly got to them in the end as they lost all of their last three games, resulting in a final league table that gives the misleading impression that United had utterly waltzed to the title.

Four points back behind these two, that’s where they were. Brendan Rodgers’ side were in the middle of a phenomenal 16-game run that saw them drop just four points. They would drop another five over the last nine games of the season, which is still pretty decent, but the circumstances – Gerrard’s slip, Crystanbul – opened them up to accusations of having bottled it.

But let’s just have a look at Chelsea there, shall we? Their win at Anfield may ultimately have been the final deciding factor in handing the title to City and producing a cataclysmic level of bantz, but at that point they should have been challengers, not kingmakers.

There’s no way Jose Mourinho’s side should have lost to Aston Villa, Crystal Palace and Sunderland, as well as drawing with Norwich. An extra five points from those four games against the teams who finished 15th, 11th, 14th and 18th would have seen the Blues crowned champions.

Ultimately, though, you can’t fit “you lost to three quite rubbish sides and drew with a truly awful one, aaahhhh” into a tune in quite the same way you can with “he slipped on his f**king arse”. So LOL, let’s all laugh at Liverpool.