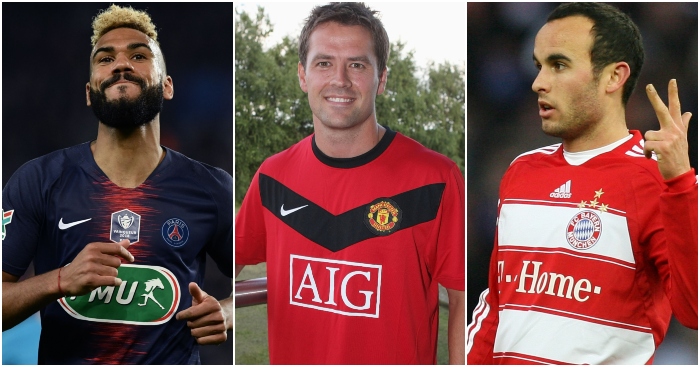 Willy Sagnol wasn’t impressed to hear that PSG were being linked with Ander Herrera, while Barca’s pursuit of Alberto Moreno has everyone stumped. But it wouldn’t be the first time the big boys have underwhelmed in the transfer market…

Julien Faubert (Real Madrid)
Never has a photo more aptly summed up a transfer. We were all Alfredo Di Stefano that day in 2009…

Faubert’s agent, Yvan Le Mee, has since spoken of how the most unlikely transfer came to fruition. Juande Ramos was looking for a right-winger and when Antonio Valencia – then of Wigan – was deemed too expensive, the Real coach followed Damien Comolli’s advice to go for Faubert.

So Faubert ended up being paraded by Di Stefano before a predictably underwhelming half-season at the Bernabeu. The winger managed 54 minutes on the pitch, 40 winks on the bench, and one missed training session while under the impression he had a day off.

Comolli is either a terrible judge of a player or a comedy genius.

Kevin-Prince Boateng (Barcelona)
Barca are making some strange moves. Apparently, they want to sign a Liverpool left-back Jurgen Klopp cannot trust, but Alberto Moreno would not even be their weirdest signing this year.

That title must go to Boateng. Four goals for Sassuolo in the first half of the season was enough to tempt Barca into bringing the 32-year-old to the Nou Camp in January. The former Portsmouth and Spurs attacker was not bought to be a starter – indeed, he has managed just 123 minutes since his surprising switch – but surely Barca could have aimed a little higher?

Alvaro Morata was considered, as was LAFC’s Carlos Vela, while Christian Stuani was deemed too expensive at €15m. It is unclear how many other names Barca must have put a line through before they reached Boateng, but the suspicion is there must have been a few.

Valencia has served United well – not in his intended role, admittedly – while Obertan and Diouf were just the latest in a string of strange moves United made back then while Ferguson went looking for untapped talent and ‘value’ in the market. Injury-prone Owen’s recruitment as the heir to Ronaldo’s No.7 shirt was more than a little bizarre.

After leaving Newcastle for free – following one single goal in the second half of a season which ended in relegation for the Magpies – Everton, Aston Villa, Stoke and Hull were all leafing through Owen’s promotional brochure. Presumably like many United fans, Owen couldn’t believe his luck when the call from Ferguson came.

A last-gasp derby winner aside, Owen achieved one thing during his three years at Old Trafford: he became one of the few players to unite United and Liverpool fans in their disdain.

Landon Donovan (Bayern Munich)
Jurgen Klinsmann made a series of bizarre decisions during his ill-fated spell as Bayern coach. Signing Donovan on loan wasn’t the strangest, but it summed up a miserable reign which left Klinsmann’s reputation in tatters.

Donovan initially went to Munich on what many were reluctant to call a trial. Klinsmann said the USA striker was training with Bayern to keep fit, but eventually, almost sheepishly, the club confirmed a loan deal for Donovan, who had already flopped in Germany with Bayer Leverkusen.

The then-26-year-old managed six Bundesliga appearances but no goals as Bayern floundered woefully under Klinsmann. Donavan fared rather better at Everton, but Bayern was always a step too far.

Nicklas Bendtner (Juventus)
Fair play to Juve; they never even tried to dress up the loan signing of the Arsenal flop in 2012 as anything other than a disappointment.

“Clearly he isn’t the top player we wanted, but we needed reinforcements,” said director Giuseppe Marotta, while caretaker boss  Massimo Carrera was no more cheerful: “He does fit our requirements for a striker. Even if due to the financial crisis we were unable to buy the players who we tracked for a long time.”

Former Juve star Alessio Tacchinardi was harsh but fair: “I will not say that Bendtner is a bad player, but he does not help improve Juventus either. He is not the player that helps them make the step up in quality. I will not deny that he is a decent striker, but I would have preferred to see a different attacker join Juventus.”

Bendtner flopped even more spectacularly than it was predicted. The Denmark striker managed no Serie A goals and only two league starts amid a series of injuries and a drink-driving charge.

#Juventus 2012-13 #Anelka and #Bendtner
Juventus winter transfers in 2012/13. They did a great job signing these two legends. They become main forces in winning league title that season and scored 0 goals combined. 😅 pic.twitter.com/NvcFwTNSIY

Eric Maxim Choupo-Moting (PSG)
If Willy Sagnol was underwhelmed at the reports linking PSG with Ander Herrera, we would love to know what he really thought when the Ligue 1 giants signed Stoke’s substitute striker.

After five goals for the Potters during their relegation season last year, most expected the 29-year-old to be moved on – but not to PS-f*cking-G. A month after kicking his heels while his Stoke team-mates began their Championship campaign, Choupo-Moting was making his PSG debut against Liverpool in the Champions League.

The logic wasn’t immediately obvious but Thomas Tuchel had worked with Choupo-Moting previously during the Cameroon striker’s most productive spell at Mainz between 2011 and 2014. There he scored 20 goals in three seasons – the highest tally Choupo-Moting has managed at any of his five clubs before PSG came calling.

What a difference a year makes for Eric Maxim Choupo-Moting!

📅 18th September, 2018
comes on as a substitute for @PSG_inside against @LFC in the @ChampionsLeague ⚽️ pic.twitter.com/kssz9VQ7tW