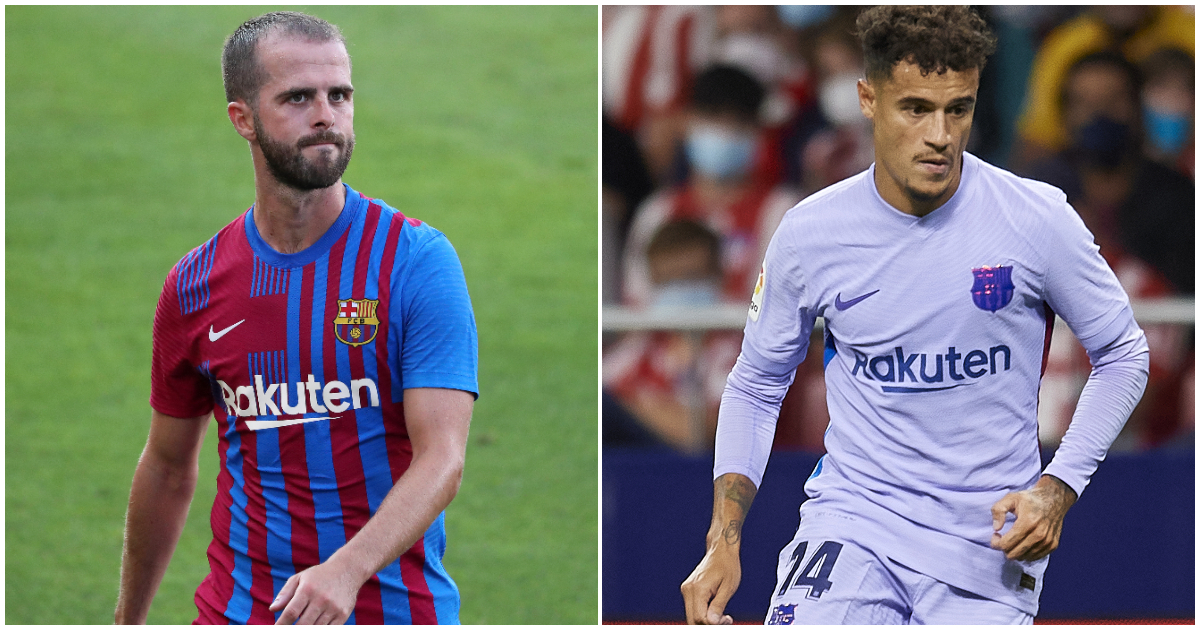 Sometimes a player can secure a transfer they think will be the making of them, only for it to kill their career dead. Here are six examples…

Philippe Coutinho – Liverpool to FC Barcelona
The tricky Brazilian spent five years at Anfield before getting his dream move to Barcelona in 2018. The Catalans spent a whopping £142million on Coutinho, or at least that was the price reported at the time. This transfer had so very many implications for every party involved, both positive and negative.

Coutinho left Liverpool to “win titles”, which in fairness he has done. But did he really contribute to any of those at Barcelona or Bayern Munich – where he spent a season on loan in 2019/20? Barely. The 29-year-old actually had a decent start to his Barca tenure, contributing to 11 goals in 18 games in his first half-season, whilst scoring in a Copa Del Rey final victory. But his first full season left a lot to be desired as he could only score 11 and assist five in 54 matches in all competitions, and he was part of the side that infamously blew a 3-0 aggregate lead in the Champions League semis, against Liverpool…

It was at this point the La Liga giants realised they’d made a mistake, shipping the attacking midfielder out on loan to Bayern, scoring 11 goals (again) in a season where his best post-Liverpool performance came against his current employers in the quarter-final of the Covid-inflicted Champions League. Everyone remembers that 8-2 match in August 2020; it was incredible, and amusing, unless you’re a Barcelona fan. Coutinho played 15 minutes and scored twice while setting up another goal in the absolute mauling of Quique Setien’s men.

The Brazil international is yet to complete 90 minutes this season after an injury-ravaged 20/21, and was offered to just about every single club in Europe in the summer transfer window, but unsurprisingly, nobody was interested. Although he has the titles he so longed for, the chaos preceding this transfer makes Coutinho’s move to the Nou Camp a shoo-in for this list. The Reds used the money brought in from his sale to sign Virgil van Dijk and Alisson, completing Jurgen Klopp’s title and Champions League-winning puzzle and are still competing on all fronts while the deal pretty much crippled Barca financially and was a contributing factor in them being unable to renew Lionel Messi’s contract. Coutinho, on the other hand, seems finished at the top level and will probably join Newcastle United in January.

Danny Drinkwater – Leicester City to Chelsea
“It’s been a shambles,” Drinkwater told talkSPORT last month when asked about his career since making the move to Stamford Bridge in 2017. It is hard to disagree with that statement, Danny, it really is. The thrice-capped England midfielder was an integral part of the Leicester side that won the Premier League title in 2016, sticking around for the following season to experience European nights at the King Power, before joining Chelsea in a £40m transfer.

Drinkwater is technically still a Chelsea player, currently on loan at Reading in the Championship before his Blues contract finally expires next summer. The 31-year-old has spent time on loan at Burnley, Aston Villa and Kasimpasa as his career has quickly declined. He only managed 12 league appearances for Chelsea, 23 in all competitions, but did get an FA Cup winner’s medal in 2018. Every cloud, eh?

During his loan at Villa Park, Drinkwater headbutted a team-mate and at Burnley he was attacked outside a nightclub, injuring his ankle in the process, all after being banned from driving for two years in 2019. That word: ‘shambles’. It sums everything up perfectly and his quotes last month pretty much write this section themselves.

His days as a Premier League player are likely numbered, but fingers crossed he can make it work at Reading and enjoy the remainder of his career before hanging up his boots, probably blowing a sigh of relief when he decides to do so.

Wilfried Bony – Swansea City to Manchester City
Bony signed for Swansea in 2013 for around £14m before the Swans doubled their money two years later, selling their star man to Man City. The likeable striker flopped at the Etihad, joining in the January transfer window after scoring nine goals in 20 league matches in the first half of 14/15. He scored twice for City that campaign – including a goal against Swansea – and found consistent game time very difficult to come by.

The following season was even more difficult; he played more than 70 minutes in a league match on only seven occasions, scoring four goals in England’s top flight and nine in all competitions. It gets worse. In 16/17 he was left out of City’s first five matchday squads before being loaned to Stoke City, for whom he made 11 appearances, scoring twice, both against Swansea in a 3-1 win. It’s funny how these things work out…

What better way to revive your career than to go back to the place you excelled? Bony returned to the Liberty Stadium the following campaign, joining for £11m; who the f*** sanctioned that deal, by the way? Unfortunately, he was a shade of his former self, scoring two league goals (one against another former employer in Stoke) before suffering a knee injury that was the final nail in the coffin of his career in England.

A disappointing season in the Championship with the Swans resulted in a move to Qatar, where he briefly re-found his level. Bony scored five in his first four fixtures for Al-Arabi before becoming a free agent. Bony played for Al-Ittihad in Saudi Arabia for ten months and has been without a club since November 2020.

Miralem Pjanic – Juventus to Barcelona
Pjanic joined Barcelona from Juventus in a bizarre transfer that saw Arthur go in the opposite direction. It wasn’t a straight swap, however. Barca reportedly paid €60m (£54.8m) plus add-ons while Juve spent €72m (£66m). It was a dodgy deal, likely executed to balance the books and work around Financial Fair Play. The Catalans gave up one of the most promising young midfielders in world football for Pjanic, who was a wonderful footballer but 30 years of age.

The Bosnian made 12 starts in all competitions under Ronald Koeman last season with just six of those coming in La Liga. He basically went from being one of the best deep-lying midfielders in world football to someone who fans desperately wanted their team to avoid signing. He was linked with the likes of Bayern Munich, Paris St-Germain, Chelsea and Arsenal, as well as a return to the Old Lady in the summer transfer window, before joining Besiktas.

Besiktas are a big club, and Turkey is a country full of crazy football fans, but let’s be real, Pjanic would not have expected or wanted to be there if you asked him this time last year. Now 31, the ex-Roma man is yet to complete 90 minutes in a league match for his new club but has provided three assists in his five matches for the Black Eagles.

Barring an Andrea Pirlo-like renaissance late into his career, I think it’s safe to say Pjanic is done at the very top level, and it is pretty fair to blame that on Koeman. With another manager in charge at the Nou Camp, the 31-year-old might still be in Barcelona and might still have the respect he deserves among football fans across the world, particularly in Spain.

Campbell has earned the chance Gerrard, Lampard were gifted

Freddy Adu – Benfica to AS Monaco (loan)
Yes, Freddy Adu, that American baller. You did not expect to see him on this list. Adu broke onto the scene at a very young age, becoming the highest-paid player in the MLS at 14 years young, whilst starring in commercials with Brazil legend Pele. He was tipped to become one of the greatest players in the world, but it did not quite happen.

Adu was drafted by D.C. United in 2004 before joining Salt Lake two years later. He was the real deal in America and looked likely to take Europe by storm, signing for Benfica at the age of 18 – a wise decision given the Portuguese outfit’s track record with young players. Adu’s issue was his patience; he expected to be the main man straight away wherever he was, and this came back to bite him right in his behind.

He was frustrated at Benfica, playing under three managers in one year at the club, admitting he “just wanted to get out of there as soon as possible”. And get out of there he did. Adu joined French side Monaco on loan, making “the worst possible decision” for his career. The former USA international joined the Portuguese side at the same time as Angel Di Maria, and as he went on to pastures new, the Argentinian stayed and blossomed into one of the finest players in world football.

“I played better than him (Di Maria), but I decided to go to Monaco. Di Maria stayed at Benfica and… Guess what? He had the opportunity to play with another coach who came later, became a starter and in one or two years he went to Real Madrid. I made the worst possible decision for my career and that is my greatest regret,” Adu said last year.

Oscar – Chelsea to Shanghai SIPG
A slightly different one. Oscar chose to end his own career by swapping one of the biggest clubs in world football as he was entering his prime years for Chinese Super League outfit Shanghai SIPG. They paid around £54m for the Brazil international – double what the Blues gave Internacional in 2012 – and are rumoured to be paying the attacking midfielder in the excess of £400,000 per week. He won a Premier League, Europa League and Carabao Cup during his time in west London, scoring 38 times in 203 appearances for the club.

Although times were getting tough at Chelsea under Antonio Conte, had Oscar stuck around he would have been playing under a new manager in no time; it is Chelsea we are talking about after all. Not quite a world-class player, the Brazilian had the potential to reach that level had he stayed in England, or made an ambitious move at the very least. He is starring in China, make no doubt about that, contributing to 102 goals in 105 matches so far, but he really killed what could have been a wonderful career to earn a very pretty penny.

Oscar was a crucial player for the Brazil national team during his time as a Chelsea player, performing well at the 2014 World Cup before his country were dismantled and humiliated by the Germans on their own turf. The last of his 48 caps for Brazil came in 2015, and the last time he was called up was a year later. It’s hardly surprising that he isn’t getting a look-in with the current strength of the Brazil squad. Oscar has become a forgotten man in the international setup.

The 30-year-old is not the first player to prioritise money over accolades and legacy, and he will not be the last. I’m not angry nor am I surprised, Oscar. I’m just disappointed.