Home F365 Features Hillsborough, the Big Five and a Football League power grab: How the Premier League was born 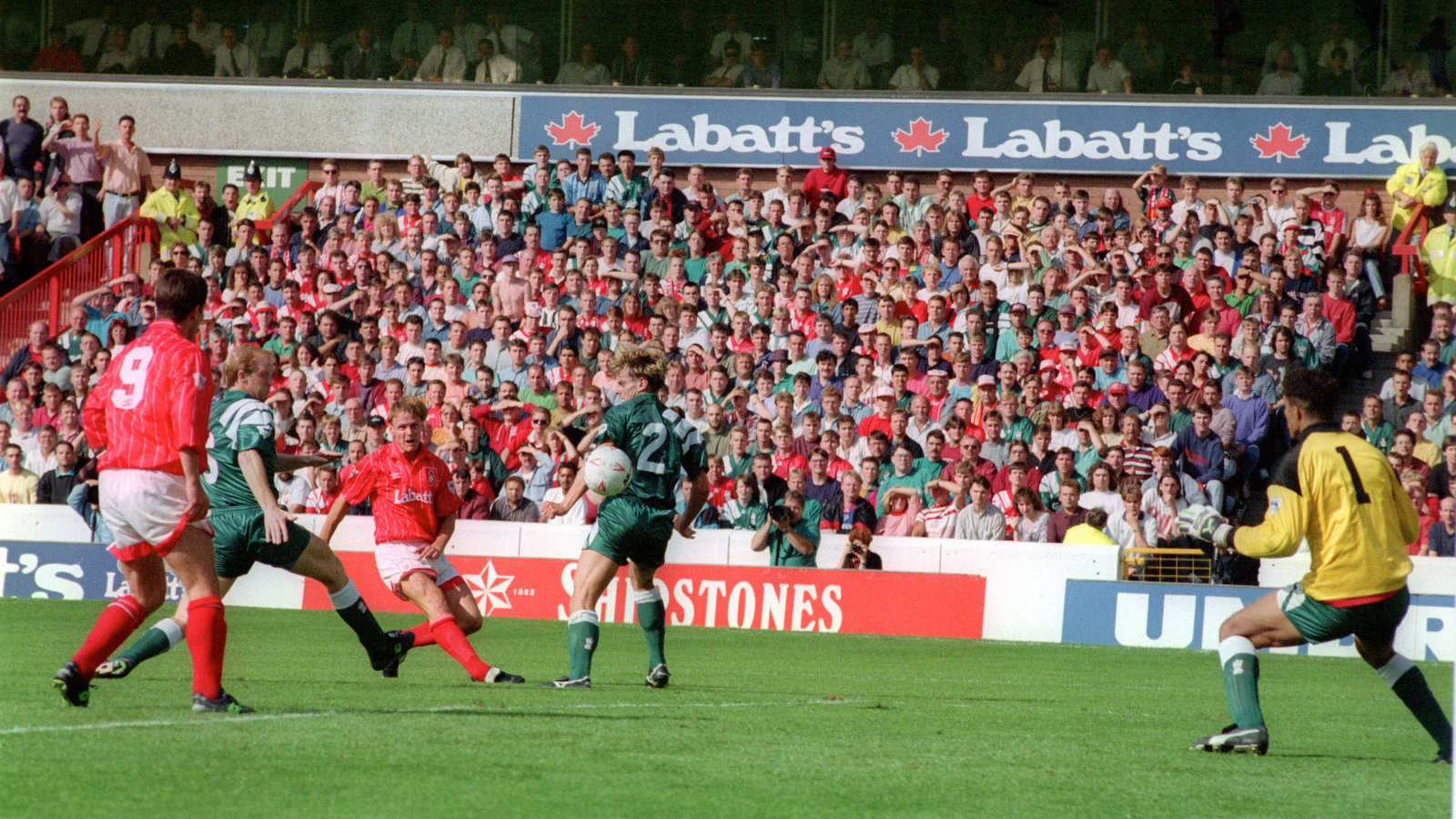 It’s the 30th anniversary of the formation of the Premier League this year, but how did this breakaway come to pass?

As the 30th anniversary of the start of the Premier League draws closer, we can expect a slew of think-pieces on how this league changed football forever. The growth of this division has changed the shape of the game across this country, the whole of Europe and beyond, tipping the balance of power within English football permanently in favour of the biggest clubs and making leagues across Europe scramble to try and secure television contracts that come close to matching that enjoyed by this ever-so-slightly-rotating cast of 20 English clubs.

But none of this was easy to predict in 1992, when the game in this country was still in a delicate condition. The twin disasters of Bradford and Heysel in May 1985 came within less than three weeks of each other, and both told fundamental truths about the decrepitude of the game in this country. The inquiry that followed the fire at Valley Parade on the May 11 1985 that killed 56 people showed that a large number of grounds in this country were little more than death traps, rendered unsafe by decades of little to no investment in infrastructure. Events in Brussels 18 days later felt like the inevitable culmination for a decade’s worth of English hooliganism in European football,  running headlong into that failure to ensure that stadia were safe. 39 people died that night, and English clubs were summarily banned from European club competitions. If anything, it was a miracle that the national team wasn’t similarly castigated.

If there was a feeling that, even after the events of May 1985, still not enough was being done to ensure the safety of spectators at matches, that culture of containment came home to roost on the April 15 1989 at Hillsborough. More people dead than had died at Valley Parade and Heysel combined, all accompanied by what was identified very quickly as a cover-up in the press, as vested interests scrambled to blame Liverpool supporters for their own deaths. But what came next was genuinely transformational. The Taylor Report suggested a raft of changes that would finally modernise stadia, giving clubs no choice but to finally drag their facilities into the 1990s, while an unexpectedly strong – if at times fortuitous – performance by the England team at the 1990 World Cup breathed optimism through the game here, with crowds starting to tentatively rise again.

The original seeds of the Premier League had been sewn in the early 1980s. Prior to October 1983, only one Football League match had ever been shown live on the television in England. In 1960, the Football League had struck a deal with commercial broadcasters ITV to broadcast live matches on Saturday evenings. Clubs were extremely nervous about this. Crowds had been already been falling for a decade from a post-war high that plateaued in 1950, and they were worried that – at a time when most of their income came from gate receipts – showing matches live on television would negatively impact upon them. ITV’s first broadcast was a match between Blackpool and Bolton Wanderers in September 1960, but a poor match played in bad conditions in front of a small crowd was enough for all concerned to pull the plug on the experiment after just one game.

By 1983, it was time to revisit the idea. For broadcasters, technology had moved on so televising matches was no longer the immense logistical challenge that it had been in 1960. And for football, the need was arguably even more pressing. Crowds were still falling, but this came against a backdrop of rapidly spiralling transfer fees and wage demands. In January 1979, for example, a new record British transfer fee was set when David Mills was transferred from Middlesbrough to West Bromwich Albion for £516,000. In September of the same year that record was almost trebled when Wolves paid Aston Villa £1.469m for Andy Gray. But the costs of this inflation were clearly visible, and the early 1980s brought about a string of financial crises at clubs including Bristol City, Charlton Athletic and Wolves. It’s a miracle that none disappeared from the face of the earth altogether.

The first live televised deal was timid, certainly in comparison with what we’re used to now. The BBC and ITV would show one match per month with ITV showing the first, a 2-1 win for Spurs against Nottingham Forest in October 1983 and the BBC following suit in December for a match between Manchester United and Spurs. The contract only ran for two years, and a dispute over renewing it in 1985 led to a complete blackout of both live matches and highlights until January 1986. But two years later, the increasing value of football to television – and vice-versa – was shown when ITV paid £44m for the exclusive rights to 21 matches per season. The previous two contracts, from January 1986 to the end of the 1987/88 season, had been worth £7.5m between them.

But ITV’s coverage from 1988 to 1992 was controversial. As a commercial, free-to-air broadcaster, advertising revenues were critical to the network, so they focused primarily on the ‘Big Five’ clubs of the era – Liverpool, Manchester United, Everton, Arsenal and Spurs – and this caused considerable irritation among other clubs and their supporters. When the fanzine When Saturday Comes launched in 1986, its first front cover proclaimed ‘STUFF YER SUPER LEAGUE’, in response to the growing belief that the biggest clubs would be breaking away from the rest. When Norwich City supporters started a fanzine in 1989, they called it ‘Liverpool Are On The Telly Again’, a reference to ITV’s constant scheduling of the biggest clubs at the expense of the rest.

The 1988 contract had itself been something of a fudge. ITV’s head of sport, Greg Dyke, had met with the Arsenal vice-chairman David Dein at that time to discuss the possibility of buying the rights to ‘Big Five’ matches alone, which many would have considered a breakaway in itself, but when the Football League found about the meeting and headed off the threat, they did so with a deal that benefitted the biggest clubs and the broadcaster, with ITV being able to show matches at a new, later time of 5pm on Sunday afternoons and clubs getting to keep 75% of the money, rather than sharing 50% with lower-league clubs as had previously been the case.

The events of April 15 1989 changed everything. The subsequent Taylor Report demanded all-seater stadia for the top two divisions, and clubs had to find the cost of this vast renovation themselves after having been given until 1994 to get the work complete. Safety was now paramount in a way that had never really been the case before. The fences that had started to go up in the early 1970s to keep supporters off the pitch came down almost immediately, but replacing all those large terraces with seats was expensive, and clubs still labouring after several seasons without European football – English clubs were eventually allowed back, except for Liverpool who followed later, for the start of the 1990/91 season – had to find that money from somewhere.

But politics was also at play. Following the 1988 near-breakaway, the Football League had produced a report called One Game, One Team, One Voice, which advocated a holistic approach to the development of all levels of the game that was based around them, rather than the FA. Relations between these two bodies had long been fraught, but this pitched the Football League as rivals to the FA, and the FA were obviously concerned that this was being treated as a power-grab by the League. Graham Kelly, who’d left the Football League for the FA just a few months before the publishing of the One Game, One Team report, commissioned a study of his own from an executive from Saatchi & Saatchi, Alex Fynn, and Fynn’s report was encouraging, that a Premier League working with the FA and against the Football League could  create a more equitable future for the whole of the game in this country.

He envisioned a reduction to 18 clubs in the top division along with a restructuring of the entire league system, with an elite division funded by rapidly increasing television revenues resting on a pyramid of regional competitions, and more ‘event’ matches. The England team would benefit and the FA would take a significant percentage of these revenues to reinvest in the national and grassroots game.

A new breakaway league couldn’t get off the ground without the approval of the FA, so the FA had some leverage, and when the biggest clubs approached them in 1990 with a view to what would happen when the 1988-1992 contract expired, they found the FA considerably more amenable to the idea of a new Premier League than they had been four years earlier, and a broadcasting landscape that was changing even more quickly than football .

In the second part of this two-parter we’ll take a look at how this influenced the shape of this new league, as well as how the FA ended up facilitated the formation of the Premier League while never really having any control over it.