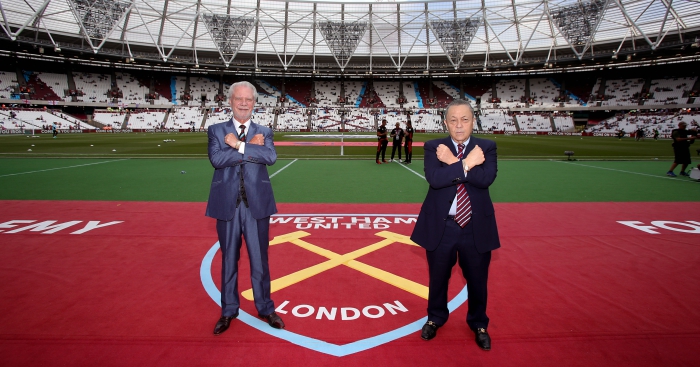 Sky Sports received a legal letter from West Ham this week demanding an apology, following disparaging comments made on Sunday Supplement about Gold and Sullivan’s ownership, according to MailOnline.

And at the very start of Sunday’s programme, Shreeves read out a lengthy statement highlighting their investment.

“On last week’s show there was a discussion about West Ham,’ Shreeves began.

“Following conversations this week between the Sunday Supplement and the club, we apologise for any factual inaccuracies made on the programme.

“Recently published accounts show that West Ham have invested heavily in the squad since their move to the new stadium, with a net spend of £240 million in the last four years, including club record Sebastien Haller.

“They’ve spent over £1.5m on scouts in the past year and they’ve also invested £10m in the training grounds at Rush Green and Chadwell Heath.

In response to the claims that the appointment of Stuart Pearce was ‘vetoed’ by the board, the club say this isn’t true.

“During the discussion it was remarked that the club had a culture of ‘everyone has got their hands in the till’ – this was a reference to the level of commitment of some players and managers, and was not a suggestion of any illegality in any way.

“We apologise if this wasn’t made clear. It was suggested that during their time in charge of Birmingham City, David Gold and David Sullivan presided over no significant investment at St Andrews.

“During their time at the club they invested in the redevelopment of the ground, including three new stands and 22,000 new seats. As a result, St Andrews has been awarded Asset of Community Value status. Sky Sports always strives for fairness and accuracy in our programming.”