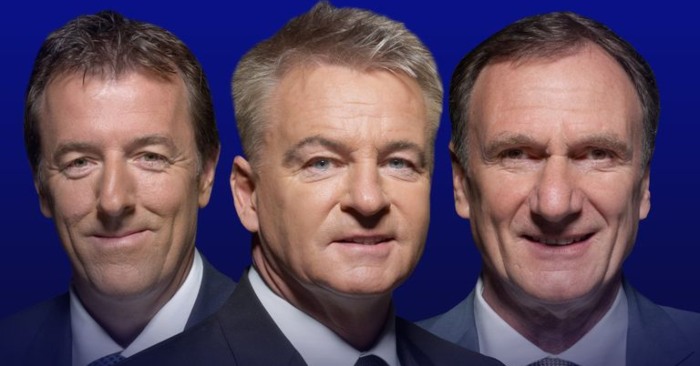 They call it a car crash moment. It’s when you see something so grotesque and foul that you really want to turn away, shut your eyes and pretend it’s not happening, but something pulls you back and you’re forced to watch it, even though your skin cringes right into the flesh and your insides twist into knots.

Talk about dropping the ball. Talk about fumbling more than a pissed juggler with oven mitts.

This comeback from @afneil is almost as good as Charlie Nicholas specsavers roast. https://t.co/kCx2cFkjvn pic.twitter.com/AV9ZfiKYcN

Charles Nicholas might well have taken the award for the most cringe-worthy clip in sports television when he delivered that response. Then came the moment this year, describing a dour match at Old Trafford, when he joked to host Jim White: “This game reminds me of your wallet Jim; it doesn’t open very often.”

It’s likely one of many reasons why Sky Sports have decided to axe their front trio. They are too dated, too old. They don’t fit what sports media is about anymore.

Indeed, the Scotsman had been shown the door, along with Phil Thompson and Matt Le Tissier – the latter probably considered the most popular of the three. That was until COVID happened and revealed his conspiracy theories to be about as unhinged as Alex Jones’ during a particularly acute manic episode.

Even still, Sky Sports have realised that the younger generation of sports fans do not relate to the men on screen. They call them dinosaurs; suited-up propaganda gatekeepers for their ‘mates’ in football. But it’s all we’ve known for the last two decades. No one has even so much as thought about having them gone because it’s all we’ve ever had: they were no cries for their heads from the public during all this time. And yet here we are.

You can see it now, in the board meeting that just took place at Sky Sports HQ, perhaps headed by a bearded, soya milk-drinking 31-year-old who only completed the organisation’s graduate programme a couple of years before. “We need fresh blood. They have to go.”

But he wouldn’t have been talking about the whole squadron, of course. Similar to Season Six of The Sopranos, when New York decided they needed rid of the Jersey family: “We decapitate the top and work with what remains.”

And what remains? Paul Merson – and this isn’t without reason. When the announcement was made about the trio of dinosaurs being axed, memes started to crop up. Of course, most users slew the gang, fans getting their own back after years of having to hear them disrespect their club in whatever way on a Saturday afternoon. Lots of shouting at the pub television, lots of slamming of pints in disagreement at those idiots on screen. Now it’s payback. Sayonara, au revoir and good riddance. One, however, really caught the eye.

Before the Champions League final, former Irish footballer Richard Sadlier went viral for delivering a quite elegant and nuanced argument about the most complex of matters pertaining to the ownership of the two finalists. But most recently, it was retweeted under the caption ‘Imagine Paul Merson trying this’.

Well, to be honest, who would want him to? There were a greyness and staleness about the other three which Sky Sports have lumbered off. But by keeping Merson, they’ve got someone who offers something different.

There are not many who agree with what he says. He does sometimes forge opinions without proper investigation. But really, you don’t need great punditry to follow a match for 90 minutes and wave your arms about in disbelief and shout and scream, because that’s what we all do when we’re in the midst of a match. Everything else – all the finely-tuned tactical analysis and Michael Coxian talk about xG can come later. Sport is supposed to take your breath away, it’s at its best when it’s most visceral. And with people like Merson, we can enjoy that aspect of the game vicariously on our screens.

Merson is a very honest and open character. This isn’t just an on-screen village idiot. He’s roundly criticised and yet he is one of the most compelling examples of mental health in sports television. He provided a brave and brilliant interview where he talked about his mental decline. Remember, this isn’t a tattooed 20-something talking at an AA meeting at Shoreditch town hall. It’s famous, working-class, west-London middle-age man spilling his heart out about his addiction issues on television. Talk about ballsy.

In that essence, Sky Sports have made the right decision keeping the best one of the quartet, even if there might be some complaints.

Of course, the question of who the next influx of Sky Sports presenters came on up the digitalised, swarming cesspit of social media almost immediately. And naturally, while users pondered who would next be their Saturday afternoon pundits providing live updates to their club, the daily dose of thinly layered racism cropped up. Some suggest that Sky Sports have only done the unthinkable to bring in black presenters, almost like having diversity is a bad thing. Some suggest that the Black Lives Matters movement had probably pressured the organisation into making the decision.

It’s all nonsense. Sky Sports will choose on merit. But it just so happens that some of the freshest and insightful pundits are black. As Ian Wright so eloquently argued, Micah Richards has been a phenomenal addition to recent football shows, and Alex Scott is one of the few pundits who’s able to turn up with some sort of preparation. The colour of their skin has nothing to do with whether they will get the slot or not. But if they did, you can bet your bottom dollar there will be outrage and decrying of their employment.

The two hadn’t even been announced or in any way linked to the show and yet still they had to endure a bunch of venom online. All for something that has not even happened. As usual, the people who claim that racism does not exist are intent on contradicting that fact.

If they are brought in, the rest of us can sit back and enjoy our Saturday afternoons now with greater delight owing to the improved talent on screen. As a Buzzfeed title might say…’Sky Sports did something we didn’t even know we needed’.