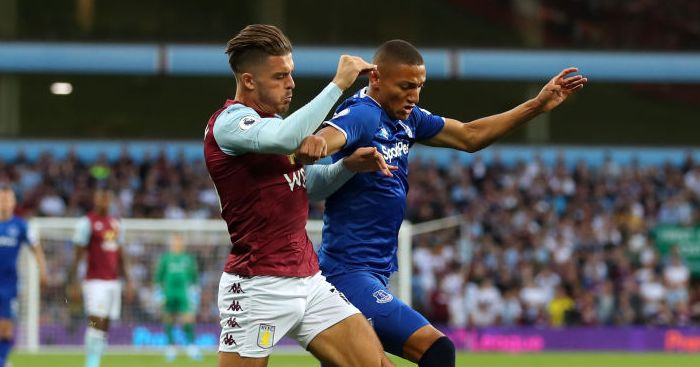 Everton like Jack Grealish but will concentrate on other transfer targets before considering making a move.

Grealish is thought of incredibly highly by Manchester United, who have not been put off by his recent flouting of a state-enforced lockdown.

But Everton might challenge Ole Gunnar Solskjaer’s side for the Aston Villa captain’s signature as they make plans to strengthen under Carlo Ancelotti.

The Toffees are pressing ahead with their transfer plans despite the suspension of the Premier League season, with Lille centre-half Gabriel Magalhaes expected to join for around £30m.

Sky Sports acknowledge that sporting director Marcel Brands ‘is an admirer’ of Grealish but any move will only be pursued ‘if they manage to seal a number of other top transfer targets first’.

Everton ‘are wary of the need to invest in a number of other positions,’ and have ‘identified’ the arrival of a right-sided attacking midfielder as their ‘priority’.

Everton Soares remains on the shortlist of his namesake club as Ancelotti was impressed with the Brazilian during the recent Copa America, but it was described as ‘unlikely’ that he would join in January.

If Everton fill those key gaps first then they ‘could consider a move’ for Grealish, but not before then.