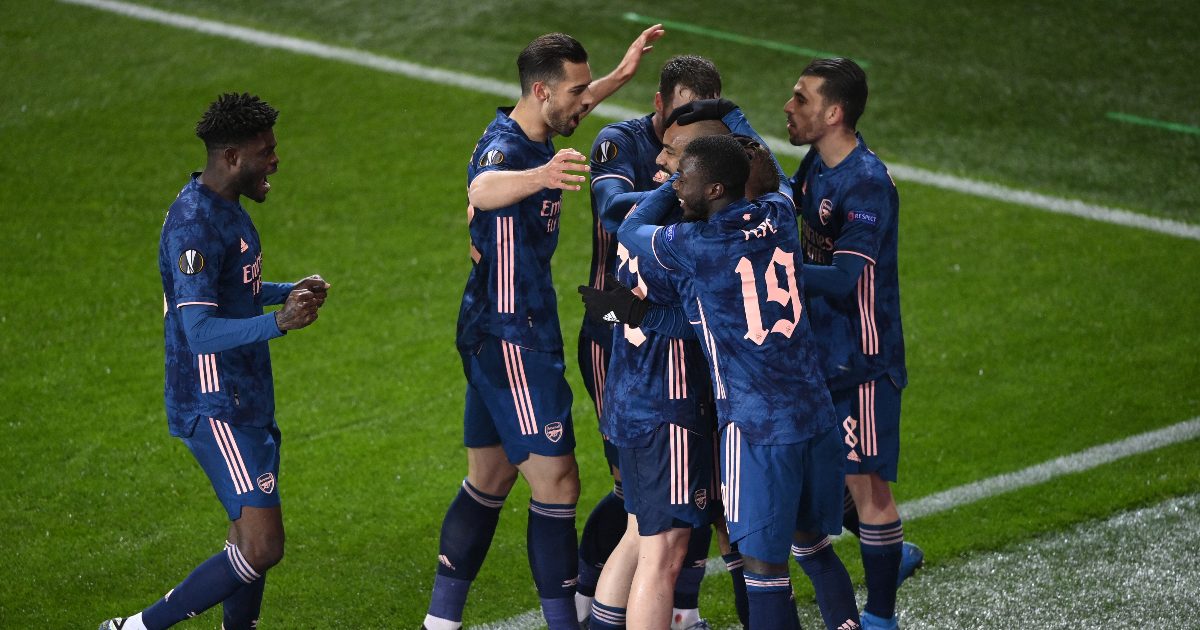 Arsenal avoided any drama as three first half goals help them to a resounding victory over Slavia Prague.

With the tie finely-poised following a 1-1 home draw a week ago, the Gunners put in one of their best showings under Mikel Arteta to win 4-0 in Prague.

Nicolas Pepe opened the scoring as his fine Europa League campaign continues, with an Alexandre Lacazette brace and a Bukayo Saka strike more than enough to see them through.

They will meet Villarreal in the last four as Emery, sacked after just 18 months in charge of Arsenal after succeeding Arsene Wenger, looks to win a fourth Europa League title as a manager.

Slavia’s late leveller in north London last week appeared to tilt the balance of the tie in favour of the Czech outfit.

They had not lost at home since November 2019 when Inter Milan were victorious, a run of 30 matches without tasting defeat.

Meanwhile only Nice and Rangers had managed to even score at the Sinobo Stadium in European competition this season – but Arsenal made a mockery of those statistics.

After wasting a hatful of good chances in the first leg, Arteta called for his side to be more clinical.

They dispatched Sheffield United in the Premier League on Sunday with a comfortable 3-0 win and, with Emile Smith Rowe in for Gabriel Martinelli in the only change, they held that same lead in Prague with less than 25 minutes on the clock.

Both results came without captain Pierre-Emerick Aubameyang, who revealed on Instagram before the game that he contracted malaria while on international duty with Gabon last month.

Smith Rowe thought he had cancelled out Slavia’s away goal early on but saw his goal ruled out by VAR for offside after he tapped in the rebound from Saka’s strike off the post.

But moments after the restart the visitors got their goal, Smith Rowe slid in a pass to Pepe, who held off a defender and squeezed in the opener just as he had late on at the Emirates Stadium.

Arsenal turned the tie well in their favour by adding a second goal three minutes later.

Jakub Hromada fouled Saka in the box and Lacazette made no mistake in converting the resulting penalty to give Arteta’s side a 2-0 lead on the night, meaning Slavia would need to win outright on the evening to go through.

But the hosts were clearly rocked and Arsenal extended their lead further still with only 24 minutes on the clock.

Saka, as he had in the lead up to Smith Rowe’s earlier offside effort, cut in and this time sent his shot into the near post to put the Gunners 3-0 ahead on the night.

The second-half was a comfortable affair for Arteta and his players as they kept a disheartened Slavia side at arm’s length.

Lacazette would extend their advantage, collecting a pass from Pepe and showing great composure before firing in his second of the evening and his seventh in his last nine appearances.

Slavia were without Ondrej Kudela, the defender hit with a 10-game UEFA ban on the eve of the match having been found guilty of racially abusing Rangers midfielder Glen Kamara in their round of 16 clash.

But in truth they never looked like repeating their triumphs over Rangers or Leicester here as Arsenal now prepare for a reunion with Emery – who took them to the final of the Europa League in 2019 where they lost to Chelsea.

The clubs themselves also have history, Arsenal coming out on top in a close-run Champions League semi-final clash in 2006 before Wenger’s side fell to Barcelona in the final.

Arteta will be hoping to be the next man to take Arsenal into a European final but will want to go one better than their previous two, with the mouth-watering prospect of a meeting with Manchester United in Gdansk still a very real possibility.