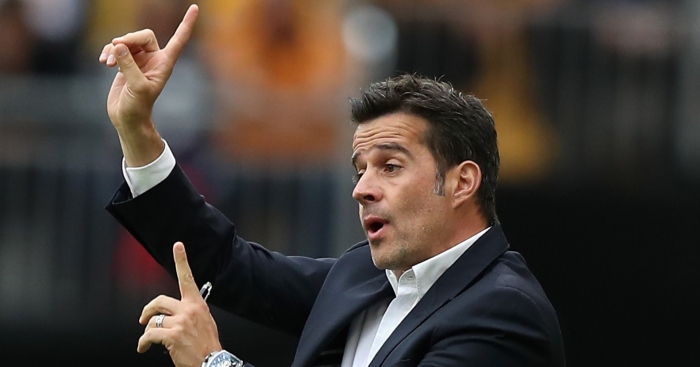 There are four new managers in the Premier League for this season: at Arsenal, Everton, West Ham and Chelsea. So we thought that it would be a swell idea to check in on their early days to distinguish any changes they made to their new clubs and things that have stayed the same. First up, the dashingly handsome Marco Silva…

Average age of the squad
The raw figures don’t indicate a massive shift, with the average age of the players used by Everton dropping from 26.6 last season to 26.1 so far in 2018/19, but scratch a little beneath the surface to see scope for far more change.

If that was evidence that the new manager would give opportunities to academy players, it also defined his summer transfer strategy. Everton signed six first-team players this summer (Richarlison, Yerry Mina, Lucas Digne, Kurt Zouma, Andre Gomes and Bernard), and all are aged between 21 and 25. In the previous two seasons alone, a whopping ten players had arrived at Everton aged between 26 and 33: Gylfi Sigurdsson, Theo Walcott, Cenk Tosun, Wayne Rooney, Idrissa Gueye, Yannick Bolasie, Morgan Schneiderlin, Ashley Williams, Maarten Stekelenburg and Enner Valencia.

That current average age of 26.1 should therefore fall even further. Zouma, Gomes, Digne, Mina and Bernard have played a total of four Premier League minutes in the opening two matches, but could reasonably replace Leighton Baines (33), Phil Jagielka (36), Schneiderlin (29) and Walcott (29) over time. Silva has already laid foundations for the future.

Greater attacking threat
Between November 30 – when Sam Allardyce was appointed – and the end of last season, Everton’s attack ground to a halt. They managed only 213 shots in total, the lowest in the Premier League over that period, and also ranked 19th for shots on target. This was a team that had ranked eighth and seventh by the same measure in the previous campaign, admittedly with Romelu Lukaku as their centre forward.

Everton also ranked 19th in the Premier League for chances created over the length of Allardyce’s tenure, proof that this was not simply an issue of shooting. The team were sluggish in possession, the manager apparently over-committed to the mission of tightening up the defence. Even that was hardly a raging success: Everton allowed the fourth-highest number of shots on their goal while Allardyce was in charge.

The most farcical period came between December 23 and January 13, when Everton managed only four shots on target in five matches against Chelsea, West Brom, Bournemouth, Manchester United and Tottenham.

After two games, Everton rank fifth for shots on target, and that’s particularly impressive given that they were forced to play 50 minutes of their opening game with ten men following the red card issued to Phil Jagielka. Everton had more shots on target in those 50 minutes than they managed in 40% of the full games played under Allardyce.

It’s hardly any surprise that Silva will look to be more attacking than Allardyce was; it’s why he was appointed after all. The acid test will be how much defensive solidity he sacrifices to improve their attacking impetus. Which brings us to…

The tweak in formation
Under Allardyce last season, Everton experimented with three central defenders and occasionally played a 4-2-3-1 formation, but he usually opted for a 4-1-4-1 with one of Morgan Schneiderlin or Idrissa Gueye protecting the defence. Even with the 4-2-3-1, it was usually one of Tom Davies and Rooney paired with one of Schneiderlin or Gueye. The latter two started only seven league games together between October 15 and April 14.

Unfortunately, with Allardyce conceding that his side often struggled to break teams down (largely due to slow movement of the ball), Everton’s answer was generally for Davies or Rooney to push further and further forward to try and create overlaps, with full-backs doing the same. That left Everton exposed to the counter attack, and often made it look as though Schneiderlin was drowning.

With no Rooney to crowbar into the side and with Davies on the bench for now, Silva has opted for less tactical fluidity but a more logical structure. He has played 4-2-3-1 in both league games, and picked Gueye alongside Schneiderlin. That allows the front four to push on without fear that they will be picked off on the counter attack.

Change in Sigurdsson’s role
Sigurdsson’s first season at Goodison did not go well. The weight of his transfer fee seemed to persuade him to try too hard in the opening weeks, and the sacking of Ronald Koeman – who had pushed hard for his transfer – left him hanging on for a first-team place.

The arrival of Allardyce after David Unsworth’s temporary tenure hardly helped. Between Big Sam’s appointment and the end of the season, Sigurdsson was mostly picked on the left side of a 4-2-3-1 or 4-1-4-1. That role generally favours a pacy wide forward rather than a tricky No. 10. Everton were crowbarring their record signing into a role that failed to get the best out of him or his team. Sometimes he wasn’t even playing at all, with Rooney used as the most advanced central midfielder.

With Rooney gone and Richarlison signed to play the wide forward role. Sigurdsson has started both of Everton’s league games as the central advanced midfielder in the 4-2-3-1. This weekend he created more chances than any other Premier League player, and has created 38% of Everton’s chances so far.

Approach play
In April, after Everton had beaten Newcastle 1-0, Allardyce attacked his club’s supporters and defended his playing style.

“We’ve completely dominated the game and out-passed the opposition in the opposition’s half,” Allardyce said. “We found it very difficult to break them down as obviously their negative tactic of dropping ten players in their own half.

“You have to be patient, we were patient but you couldn’t knock our football. You could knock passes going astray but in all fairness you can’t really blame me for that one, can you? I’m not out there passing the ball, the lads do.”

Allardyce’s self-preservation had already become a running theme of his short tenure, but had he unwittingly admitted the issue with his team? Everton ranked 13th in the Premier League for passes, averaging 380 per match. Their passing accuracy was 72.9%, 16th in the league and better than only Burnley, Stoke, Newcastle and West Brom.

As was the hallmark of Allardyce sides, an inability to create chances had led to direct football. Over the course of the entire season, only Burnley played more inaccurate long balls per match than Everton’s 42.9.

The statistics under Silva are likely impacted by playing for almost 30% of the time with ten men, but they have still completed 37 more passes per game from Allardyce’s reign. Possession is up by a full five per cent, while passing accuracy is also up on last season. Slowly but surely, Silva is turning things around.