Home F365 Features Slowly but surely: What Graham Potter has changed at Brighton 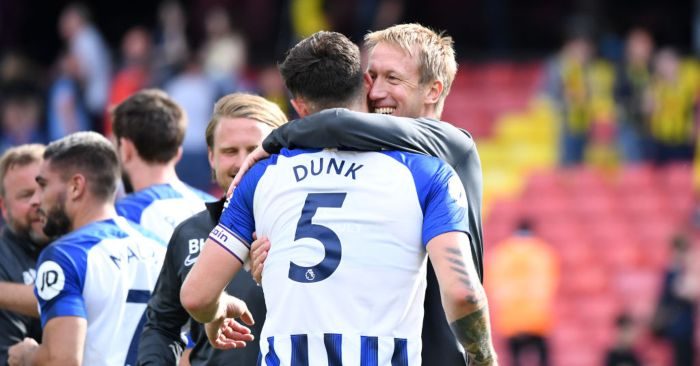 “We’ve got nine British managers in the Premier League this year and hopefully those managers are going to go on and prove themselves,” Sam Allardyce told talkSPORT two days before the season began. “Steve Bruce, Frank Lampard and Gary Porter have been taken from other clubs…”

That they have, Captain Pint-O-Wine. That they have. Brighton, Chelsea and Newcastle all changed managers in pre-season, with each new incumbent promising vast stylistic changes from their predecessors. The campaign might offer a limited sample size after just three games, but we can still derive some interesting information as to just what Messrs Bruce, Lampard and PorterPotter have in mind.

First off, big G-Dog down at the Amex.

Formative assessment
The most obvious alteration Potter has made to the Chris Hughton side he inherited is in terms of formation. While the world’s youngest 60-year-old favoured a rigid 4-1-4-1, sometimes opting for a 4-2-3-1 or variant thereof, Potter has shown a little more ingenuity and adventure. His three Premier League games thus far have seen a more structurally sound 3-4-3 or 5-2-3 used.

The focus on three at the back has been a staple of Potter’s coaching career. It provides a numerical advantage – or parity, at the very least – against any strikeforce. The finest example came on the opening day as Watford’s front two were immobilised for 90 minutes. But it also offers width from the wing-backs, roles that the more attacking Martin Montoya and hard-working Solly March were made for.

It is no coincidence that the three Brighton players with the most passes so far this season are their three ever-present centre-halves: Lewis Dunk, Shane Duffy and Dan Burn. The only surprise is that £20m summer signing Adam Webster is yet to make his Premier League debut, but his time will come. Burn seems the easiest of the trio to displace; he has probably been the best overall performer. With that said, Dunk’s underrated passing has been given an overdue platform.

Much was dependent on Dale Stephens in terms of building up play last season under Hughton, but playing out from the back has already become a feature of Brighton’s style with Potter at the helm. Be careful what you wish for, eh?

Passing the test
A direct result of a more stable defensive base is that foundations for shorter, sharper passing have been laid. Players have more options to look for instead of simply launching long balls for Glenn Murray to chest down and hold up.

Brighton ranked 17th for average possession in the Premier League last season with 44.1%. In 2019/20 they are already eighth with 52.4% of the ball. The circumstances must be acknowledged – three mid-table opponents and two home matches – but the renewed emphasis on keeping the ball is clear.

The Seagulls are also registering a higher pass accuracy – 77.9% (11th) compared to 74.8% (16th) in Hughton’s final season. The integration of a third central defender has clearly helped here, because they are making 383 short passes per game (10th) as opposed to 306 (17th).

The obvious conclusion is that Potter is simply coaching these players to take the easier, shorter option. The reality is that he has introduced more variation to their approach. They are making only marginally fewer long passes per game – 69 (4th) to 70 (3rd) – in comparison to last season. They are also attempting more crosses. Potter has taught these dogs new tricks, while keeping the old ones fresh in the memory.

Age appropriate
On that note, one of Potter’s most popular decisions at Swansea was to rely more heavily on youth. He has not quite emulated that on the coast as of yet, but he has rebalanced the scales ever so slightly. Murray is the only player over 30 he has used in the Premier League this season; the striker was one of five tricenarians to feature under Hughton.

The starting XIs Potter has named are also slightly younger on average than Hughton’s in his final season. With Jose Izquierdo (27), Alireza Jahanbakhsh (26), Adam Webster (24) and Yves Bissouma (22) all first-teamers who are yet to even make a Premier League match-day squad, the days of Bruno (37), Gaetan Bong (31) and Beram Kayal (31) are long gone. Leon Balogun (31) has been similarly shifted out.

Jahanbakhsh, a former club-record signing forward by trade, was even namechecked by the manager as a possible option at right wing-back, such is the new fluidity. Fixed positions and roles are no more. And 19-year-old League Cup goalscorer Aaron Connolly could get his chance.

Attack the day
As if equalling the club’s biggest ever top-flight away win in his first game was not indication enough, Potter has instilled a greater attacking threat to the Seagulls. They have gone from 9.8 shots per game (19th, above only Burnley), to 11 (joint-13th, above Arsenal). They had the fewest shots on target per game (2.8) but are now joint-11th with 3.3.

The most striking difference is how those shots are being produced. Only Burnley (60.3%) and Cardiff (57.8%) had a lower percentage of their shots in open play than Brighton (60.9%) last season. Under Potter that tally is 72.7% – the exact same as Liverpool, and below only Norwich (75.7%), Aston Villa (77.7%), Manchester City (77.7%), Chelsea (81.8%) and Tottenham (82.3%). They await their first shot from a counter-attack under Potter and are not producing as many chances from set-pieces, but pose a much greater threat in open play regardless. Being equal with Liverpool in any metric can only be positive.

A case for the defence
With the great power of three at the back comes great responsibility to repel any and every attack. Brighton have gone from conceding 15.3 shots per game – the third-worst top-flight defence – to the seventh-best at just 10.3. They are also making more tackles (20.3 to 17.9) and interceptions (12.3 to 12.2).

The sneaky b*stard Seagulls that committed more fouls per game than any Premier League side last season (12.2) has settled down somewhat at 10.3, the joint eighth-highest. It turns out it’s difficult to keep chopping people down when you have more of the ball.

So the next time someone asks why Brighton sacked Chris Hughton, tell them any of the following: