Home F365 Features Slowly but surely: What Steve Bruce has changed at Newcastle 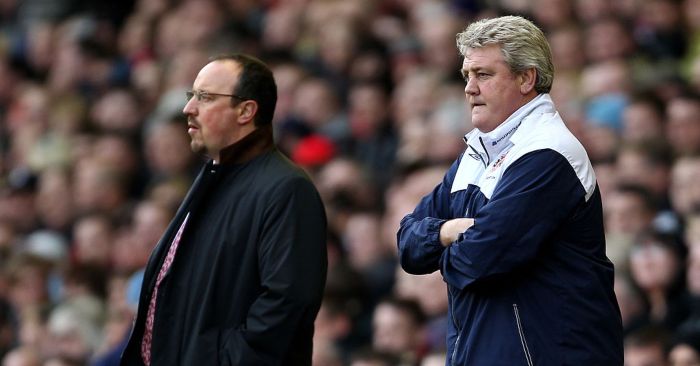 “I think what insults me more than anything is the insinuation that we can’t do a warm-up and tactics,” Steve Bruce said last week. “All we’ve worked on is team shape since I’ve been here. All we’ve done, all week and every week, is formation, team shape.

“The insinuation that we’re not capable of doing that – that criticism hurts, because it’s untrue. We can all take criticism as long as it’s constructive. When it’s complete lies, that’s when it’s disappointing.”

Within a couple of days, Bruce had secured his first win as Newcastle manager – away at the Champions League runners-up, no less. It leaves the Magpies as one of five Premier League clubs with one win and two defeats from three games. But what can we garner from his supposedly non-existent tactics thus far?

Less is more
The inclination for any new manager is to tell his players to express themselves, to spread their wings after weeks and months of having them clipped by the previous incumbent. The problem Bruce has faced in that regard is that Rafael Benitez was a universally popular manager at St James’ Park: players and fans alike adored him. There was no hated regime to overhaul.

No side have produced more of their shots from set-piece situations than Newcastle this season (34.5%), which is up from 28% last campaign. The majority of their attacks came from the right-hand side in 2018/19 but are now emanating from the left. Efforts from outside the box have dropped drastically from 40% to 28%, while only Norwich have had a higher percentage of their overall shots in the 18-yard box (69%). Considering they were joint-9th with 54% last season, that is quite the rise. Newcastle are taking fewer potshots and waiting a little longer for their opportunities to become clearer.

The suggestion that Bruce has changed little so far is not helped by the fact that Newcastle are spending the exact same amount of time in the opposition third (24%) as last season.

Pass over
The theme of Newcastle streamlining their statistics under Bruce only continues. No club has had less average possession (37.3%) although it must be said that they have faced Arsenal and Tottenham in their first three games. They see less of the ball but maximise their time on it more, recording a higher pass accuracy but with fewer passes (301.3 per game v 354.9).

Key passes are down from 8.6 to 7.7, short passes are down from 288 per game to 247, and crosses per game have lowered from 19 to 15. But some may be surprised that Bruce has taken over a club that attempted more long balls per game (71) than every club except Burnley last season, and turned them into a side that produces only 58 – or as many as Liverpool. As Brighton will attest, matching the European champions in any regard is a sign of progress.

Something of an explanation is offered in Newcastle’s highest passers so far. Only Fabian Schar (108) and Matt Ritchie (106) have reached triple figures, with Dummett (91) not far behind. Last season Jamaal Lascelles (1,104), Ritchie (1,100) and Martin Dubravka (1,033) led the way. The keeper and his upfield launches rank behind six other teammates for attempted passes so far, pointing towards a slightly more progressive, patient Toon.

That Joelinton places fourth for passes and touches points towards a striker happier to get involved in dropping deep into midfield to start attacks instead of simply becoming a conduit to try and hold the ball up and relieve pressure. Rondon was sensational at that task, but his £40m replacement favours a different style.

Defend the north
While a possession percentage of 20% is the second-lowest for a winning team in the Premier League since 2003/04, Newcastle were perhaps fortunate to escape from Tottenham’s clutches with three whole points. They are conceding more shots per game (13.3 v 12.9) and attempting fewer tackles (18.3 v 18.8). Interceptions are up from 13.3 to 14, behind only Sheffield United, but still.

The 3-5-2 Bruce used against both Arsenal and Norwich has surely been consigned to the tactical scrapheap. It showcased Jonjo Shelvey’s passing range but exposed the three central defenders and meant the midfielder had to shoulder the entire burden of creativity. A central partnership of just Sean Longstaff and Isaac Hayden against Tottenham was infinitely more solid and reliable than the trio of Hayden, Shelvey and Ki Sung-yueng that folded to Norwich.

Longstaff really is the key. His mobility and defensive protection gives Newcastle a shield at one end and a platform at the other. Hayden alongside him is the ultimate unsung Premier League hero. Shelvey and Ki are much better on the ball but the three central defenders can and are being relied upon to pick the right pass.

Spurred on
Such a small sample size makes it difficult to decipher what Bruce has truly changed; that he has already switched formations once in three games makes it an even more unenviable task.

Perhaps the fairest solution is to compare the system and tactics he used to beat Tottenham 1-0 away to the ones Benitez deployed to lose the same game by the same scoreline in February. It should offer, at the very least, an interesting insight.

That Bruce has already matched Benitez’s 2018/19 record against ‘Big Six’ clubs – and surpassed it in terms of away games – deserves acclaim. But the accusation is that he simply copied his predecessor’s tactics in north London. The formation Bruce used at the weekend was the same Benitez utilised six months ago: a 3-4-3 that becomes a 5-4-1 in the defensive phase. Emil Krafth, Paul Dummett, Miguel Almiron, Allan Saint-Maximin and Joelinton took the roles of DeAndre Yedlin, Florian Lejeune, Ayoze Perez, Christian Atsu and Salomon Rondon – and Atsu even replaced the injured Saint-Maximin in the first half.

The differences elsewhere were negligible. Newcastle had eight shots in both victory and defeat. They won a similar amount of headers and completed roughly the same number of tackles, with Rondon hitting the woodwork in the 50th minute at 0-0 while Joelinton was able to take his chance and score the only goal of the game in the 26th.

But dig a little deeper and one thing is obvious: Newcastle are more risk-averse, or at least were in the immediate aftermath of their Norwich humbling. The side that lost 1-0 to Tottenham completed 67% of their passes, made eight dribbles, dispossessed the opposition eight times and committed two errors leading to shots on goal, the first of which was Martin Dubravka’s mistake for the winner. The side that beat Tottenham 1-0 completed 75% of their passes, made three dribbles, dispossessed the opposition ten times and committed no errors leading to shots on goal.

Bruce’s Newcastle also had more shots on target (3) and conceded fewer (2) in comparison to Benitez’s (2 and 4). It is an imperfect example of two games that could both easily have gone the other way. But Newcastle faced a Tottenham side at the beginning and in the midst of a terrible cycle, and were more diligent, professional, organised, composed, cautious and clinical in the second. It was the kind of defensive performance Benitez would take strange flak for, but it paid off.

After trying to unnecessarily reinvent the Benitez wheel, Bruce has taken to simply adding a few of his own spokes. He inherited a great goalkeeper and fantastic defence, as well as a strong midfield. The addition of wide forwards and a central striker in the mould of Roberto Firmino has left Newcastle with a decent side geared towards evolution rather than revolution.