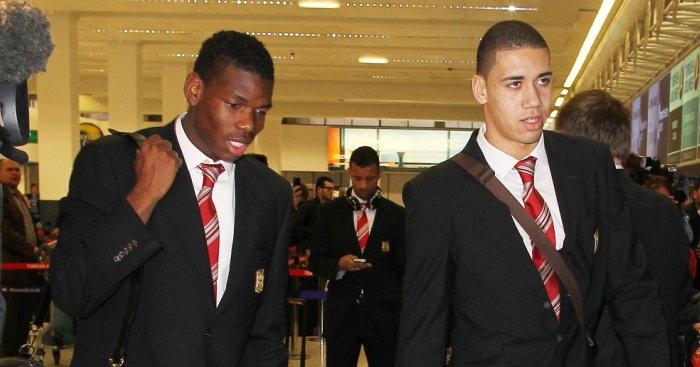 Smalling has played with a number of players at United since joining the club in 2010.

The 27-year-old has played under four managers and one Ryan Giggs, and has won eight trophies in seven years.

He was asked to choose his XI of the best players he has played with at Old Trafford, and David de Gea and Antonio Valencia were the first two named.

“Right-backs have changed a lot but I’m going to go with Antonio,” he told United’s official website.

“When I first joined he was a right midfielder but he has made that right-back position his own over the last few years and I don’t feel there’s any player who’s going to beat him in a one v one duel.”

On his selection of Rio Ferdinand and Nemanja Vidic at centre-half, Smalling said: “When I signed both were in their prime and I got to train with them and play with both and learn a lot from them.”

The England international then opted for Patrice Evra at left-back, and Paul Scholes, Michael Carrick, Ryan Giggs and Paul Pogba in a midfield four, with Wayne Rooney and Marcus Rashford as his two strikers.

“There’s obviously a lot more experienced strikers that I have played with,” Smalling said of Rashford. “But I think the impact he has had since he joined and come the end of the career he will be known as one of the greats.”