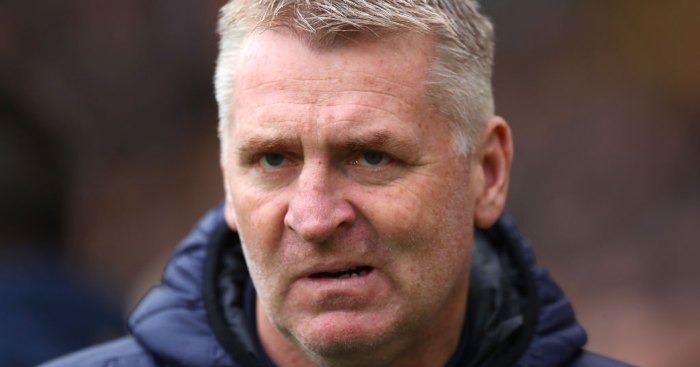 Aston Villa boss Dean Smith accused his side of lacking desire after their defeat at Wolves.

Injury-hit Villa lost 2-1 at Molineux on Sunday to slip to a third straight Premier League loss.

“It appeared the game was bigger for them than us. The best thing was it was only 1-0 at half time,” said Smith.

“It’s not really for you to print (what he said at half time). You have to go and compete, it doesn’t matter what game you’re playing.

“We didn’t cope with the pressure we were put under. They were right up for it from the start and we didn’t have enough intensity in our play. That’s something we’ll talk about.

“It won’t take an awful lot to be better.”

Skipper Jack Grealish was missing with a calf problem with Tom Heaton also out with his own calf injury.

The goalkeeper has pulled out of the England squad to remain at Villa for treatment.

Replacement Jed Steer lasted just eight minutes, limping off with an Achilles issue, while Matt Targett came off with blurred vision and Bjorn Engels missed the game with a hip problem.

“It (the disruption) doesn’t affect your desire to win a header, a tackle and a second ball,” Smith insisted.

Steer’s replacement, Orjan Nyland, was beaten by Neves’ fine 41st-minute strike, the midfielder drilling in from the edge of the box.

Adama Traore hit the bar before Jimenez made it 2-0 with six minutes left. Trezeguet gave Villa hope with a late strike late, which was given by goal-line technology, but the hosts held on.

Wolves are now unbeaten in their last seven top-flight outings and are just one point adrift of the top five.

Boss Nuno Espirito Santo said: “We always compete, this is very tough to do and it makes me very proud.

“We played very well, we dominated the game, especially in the first half. I’m happy with the performance and atmosphere.

“When you produce so many chances you must finish the actions, we broke a lot of times and we clearly didn’t finish it. We need to improve on that.

“Villa created more problems in the second half, didn’t allow us to press as high, but we’re happy because we made the second goal and could have made more.”