"I'm pleased, proud and every adjective to go with it." 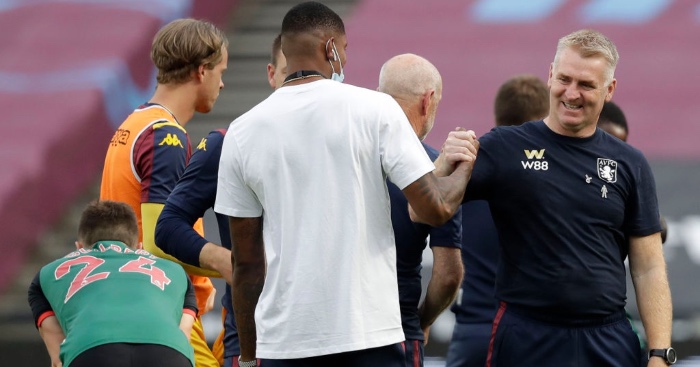 Grealish scored his tenth goal of the season late in a cagey game at the London Stadium, and despite Andriy Yarmolenko’s quick reply, the point was all Smith’s team needed to stay in the Premier League.

And Smith hailed the achievement of his players, reserving special praise for Luiz and Grealish

Smith told BBC Sport: “I’m pleased, proud and every adjective to go with it. A lot of people had us relegated but we have worked so hard. We used the pandemic well. We have looked strong. A lot has been made of what we spent but we had to. I would have said this if we had been relegated or stayed up. It is an achievement from the players. They have grown and become Premier League players. We need to build on that and recruit in the summer.

“We did a lot of work on how we wanted to defend. Douglas Luiz’s form has gone through the roof. It was always going to be hard for him playing catch up as he came in with days to go until the season started.

“Condolences to Watford and Bournemouth. I can only imagine how they feel now. Eddie is a fantastic manager and a great coach. It had to be two out of three. But I am proud of what we have done. We were aware of what was going on. Bournemouth did what they had to do and so did we.

“In pre-season we sat down and came up with three words that we wanted to work by – togetherness, prepared and relentless. We have grown into that. It takes a long time to build a culture and I think we have started.”

On Jack Grealish, he added: “I said to him he would come to the party and score. He has been getting better and better. He has come good when he needed to. It (his future) will all be sorted over the next month. Tonight we will enjoy a magnificent achievement. It feels better than when we went up through the play-offs.”