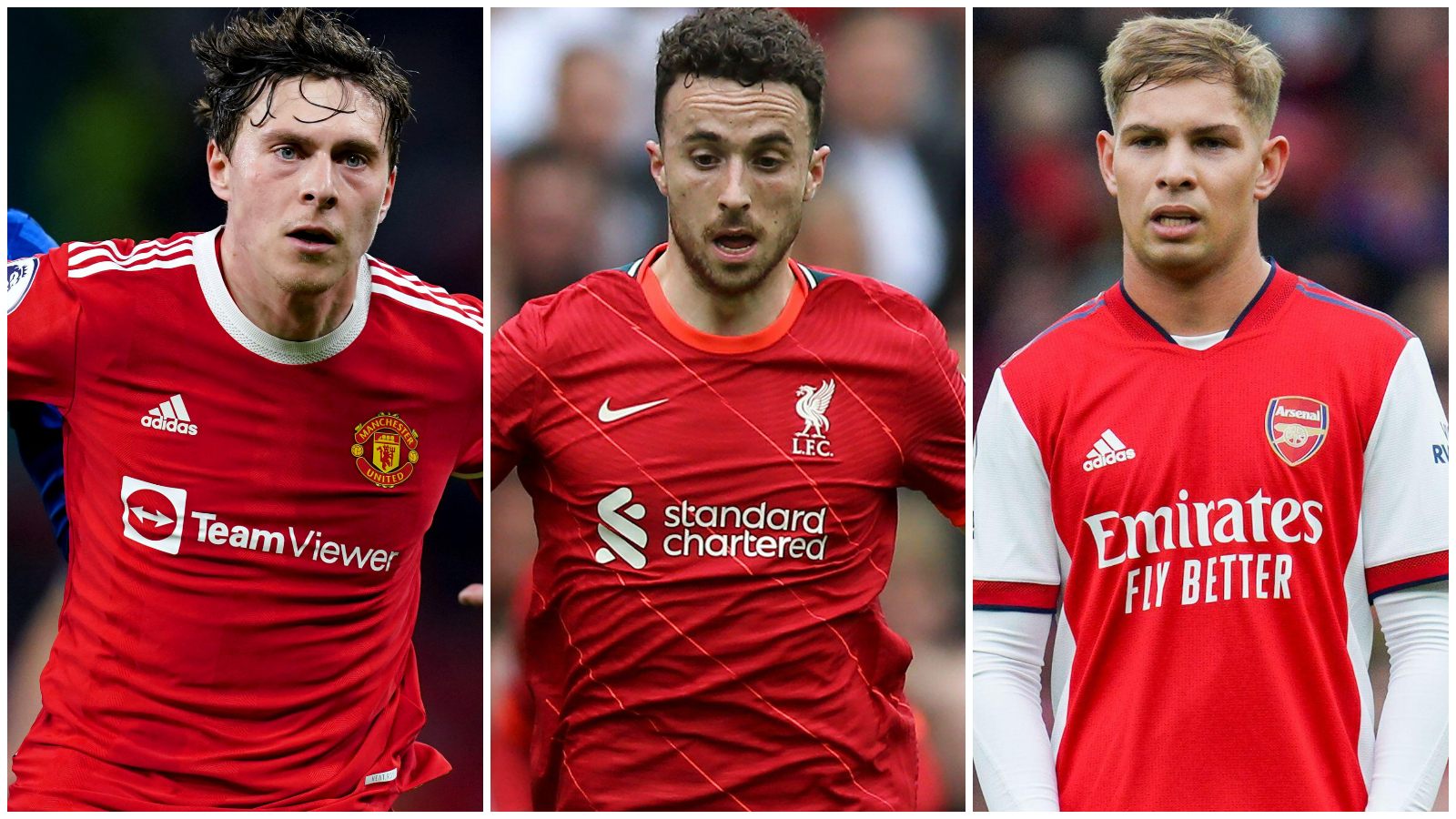 Our criteria for ‘Premier League regulars’ is 20 Premier League starts last season, which rules out the likes of Roberto Firmino…

ARSENAL: Emile Smith Rowe
In November 2021 he made his England debut but by this summer he was back with the England Under-21s having dropped down the Arsenal pecking order towards the end of last season, starting only three of the Gunners’ last seven Premier League games. What he probably didn’t need to hear was that Arsenal had dropped over £30m on another attacking midfielder who can play on the left. Ouch.

ASTON VILLA: Ezri Konsa
Having already found himself on the bench more than once to make room for Calum Chambers, what are the chances that Konsa keeps his place after the rather expensive signing of Diego Carlos? “He’s a big part of this club and I don’t think anyone needs to read any stories about Ezri except that he’ll be here for pre-season, will reset and be ready to go,” said Steven Gerrard in May, but it’s almost impossible to see Konsa starting 29 Premier League games again next season. Even if they don’t sign Joe Gomez too.

BRENTFORD: Sergi Canos
Canos was really very useful for Thomas Frank last season but when push came to shove towards the end of the campaign and the Bees switched to a back four, the less defensively sound Spaniard was pushed out, with the centre-back Kristoffer Ajer moving into that position. All indications are that Brentford will strengthen on both flanks this summer and Canos is likely to become a bit-part man as they look to avoid the Second Season Syndrome that can strike those who stand still.

BRIGHTON: Neal Maupay
When you have started only two of your team’s last eight Premier League games and failed to score since February, the last thing you want to remember is that the Seagulls have already signed a striker (Deniz Undav) who scored 25 goals in 33 Belgian league games last season.

CHELSEA: Kai Havertz
None of Chelsea’s army of underperforming forwards hit the 20-start mark, with Christian Pulisic, Hakin Ziyech and Timo Werner weighing in with 13, 14 and 15 starts respectively. But we have to assume that Kai Havertz would be under threat from a potential double move for Raheem Sterling and Raphinha. Both would be an upgrade.

CRYSTAL PALACE: Jeffrey Schlupp
It seems astonishing that Schlupp started 20 Premier League games last season – largely in central midfield – but we don’t expect him to repeat that underwhelming trick after the signing of Cheick Doucouré from Lens. But the probable losses of both Conor Gallagher and Cheikhou Kouyaté will certainly keep him in the ‘useful to have around’ bracket he has occupied at Palace for over five years.

EVERTON: Allan
Financially stricken Everton would really quite like to sell the Brazilian for around £10m this summer before he leaves for nothing next year, because you can be damned sure that Frank Lampard does not see the midfielder – who started none of the last six games of the season – as a big part of his plans, especially with central midfielders targeted this summer.

LEEDS UNITED: Mateusz Klich
Leeds have already signed two midfielders in Marc Roca and Brenden Aaronson and there are likely at least two more incoming with Mohamed Camara and Tyler Adams both heavily linked. That does not bode well for Klich, who was dropped by Jesse Marsch for the final, vital game of the season at Brentford.

LEICESTER CITY: Daniel Amartey
It was never in anybody’s plans that Amartey would play over 2000 minutes of Premier League football last season for the Foxes, almost trebling his numbers from the year before. But injuries and poor form hit hard and Amartey was too often the last man left standing. With centre-halves and central midfielders targeted this summer, the Ghanaian could end up on the fringes again.

LIVERPOOL: Diogo Jota
The Portuguese forward made a pretty impressive 27 Premier League starts last season but more telling is the fact that he did not start any of Liverpool’s three cup finals as the first-choice front three was established as Luis Diaz, Sadio Mane and Mo Salah. Any ideas that the sale of Mane would open up more opportunities for Jota were dashed when they promptly dropped a fortune on Darwin Nunez.

MANCHESTER CITY: Kyle Walker
Only just makes the cut after just 20 Premier League starts in a season blighted by injury, which will happen when you’re 32 and you have run very, very fast for a long time. The bad news for Walker is not that City want to sign a new right-back but that they desperately want an actual left-back and that means Joao Cancelo can switch his phenomenal form to the right. What a signing he has been.

MANCHESTER UNITED: Victor Lindelof
If Manchester United are targeting Lisandro Martinez (and have already targeted and apparently been rebuffed by Jurrien Timber) then they are in the market for a centre-half and that leaves Lindelof as fourth-choice centre-half for two places. He might spend an awful lot of next season on the bench next to one half (at least) of McFred.

NEWCASTLE UNITED: Jamaal Lascelles
With the best will in the world, Lascelles does not start in a world in which Newcastle United have spent proper money on Sven Botman having already brought in the monumental Dan Burn.

SOUTHAMPTON: Jan Bednarek
One area that needs vast improvement at Southampton is centre-half, with Armel Bella-Kotchap signed and at least one more centre-half targeted. Bednarek could well be available for transfer this summer; the writing was on the wall when he was dropped to the bench for the final two Premier League games of the season.

TOTTENHAM: Emerson Royal
‘La Liga return on the cards for out-of-favour Tottenham defender’ is one headline turned up by a Google search, but actually Royal started 26 Premier League games last season, including the final nine as Spurs claimed a Champions League place. But Spurs are actively looking for right wing-backs which would likely leave Royal as third choice behind Matt Doherty and the new man.

WEST HAM: Said Benrahma
West Ham might fail in their pursuit of Arnaut Danjuma but what we do know is that they want an upgrade on left-winger Benrahma, with some reports suggesting that he is up for sale this summer. David Moyes is not a fan, having apparently coveted Eberechi Eze rather than the Brentford man two years ago.

WOLVES: Hee-chan Hwang
Wolves desperately need to source some goals this season, though the return of Adama Traore and fitness of Pedro Neto should help. The South Korean looks hella vulnerable with just one Premier League goal since October. But the whole of Wolves looks hella vulnerable.