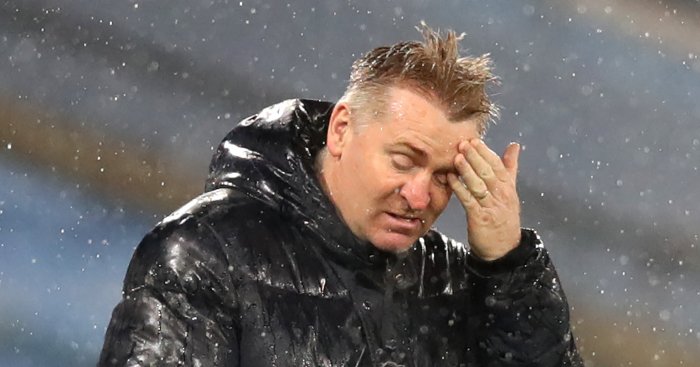 Aston Villa boss Dean Smith angrily rounded on the officials after his side conceded twice late on to lose 2-0 at Manchester City.

Smith was shown a red card for his protestations after Bernardo Silva put City on course for their sixth successive Premier League win by breaking the deadlock 11 minutes from time.

Aston Villa were furious that Rodri appeared to be running back from an offside position when he dispossessed Tyrone Mings* to set up Silva for the breakthrough goal.

Smith was also far from happy about the last-minute penalty, awarded for handball against Matty Cash, that led to Ilkay Gundogan wrapping up the victory.

Smith said of City’s opener: “It was a farcical decision. I’ve not seen a goal like that given. It needs to be looked at. I don’t think anyone in this stadium thought it was a goal.

Never even heard of that rule, just let players stand offside, then run back & tackle you? In hindsight I should’ve cleared it, 100%, but didn’t even know that was the case. Nonsense https://t.co/2UiFEV9eqH

“Are we just going to leave players behind the line then? It’s farcical. He was 10 yards offside and come back and tackled our player, it’s a pathetic law and a pathetic decision.”

After the match, the PGMOL issued a statement explaining that, by the letter of the law, Rodri had not gained an advantage.

The statement read: ‘Rodri was initially standing in an offside position as the ball was played upfield.

‘As the Law deems that Rodri has not gained an advantage, he has not committed an offside offence and play should be allowed to continue. Rodri legitimately took possession of the ball from Mings, starting the attack which resulted in the goal.’

Smith revealed that, amid his anger on the touchline, he was shown a yellow card by referee Jon Moss for asking fourth official David Coote “if he got juggling balls for Christmas”. This was swiftly followed by a red card for something else Smith said.

A bit confused with that offside rule if I’m honest but beaten by a brilliant team. Rest up and then back at it Saturday 💪🏻 pic.twitter.com/o31wpYiE2D

Smith said: “It wasn’t swear words. He (Moss) came over and said he was interpreting the laws of the game. I said, ‘Well you should have done that earlier in the game’.

“I think I got treated rather unfairly. I’ve heard a lot of worse things said to Jonathan Moss before and he’s not dealt with it like that. It looks like he couldn’t wait to give me a yellow and then a red.

“But I’m frustrated with myself because I got sucked into something I shouldn’t have.

“I don’t think anyone was aware of the law. Surely he’s taking advantage of an offside position.”

Smith’s frustration compounded when the ball struck Cash’s hand at point-blank range from a Gabriel Jesus header across the box.

Smith added: “A header from a yard out that has hit his arm. That’s not handball – it’s ridiculous.”

Until the late drama, Aston Villa had acquitted themselves well on their return to action after a Covid-19 outbreak at the club but it was mostly a tale of their defence against City’s attack.

“It was a heroic performance in terms of energy and commitment but we didn’t show enough quality against a very good team,” Smith said.

City manager Pep Guardiola did not have a strong opinion on his side’s controversial opener.

Guardiola said: “I didn’t watch the image on TV. I know they complained on the touchline but VAR is there.

“I don’t know exactly the rule but if it was offside I am pretty sure the goal would have been disallowed.

“In general the game we played was outstanding and we deserved to win.”

*Buy Tyrone Mings and thousands of other players on Football Index. 18+, UK and Ireland customers only, begambleaware.org. T&Cs apply.