Home Mediawatch So is Rashford not Rooney AND Ronaldo anymore? 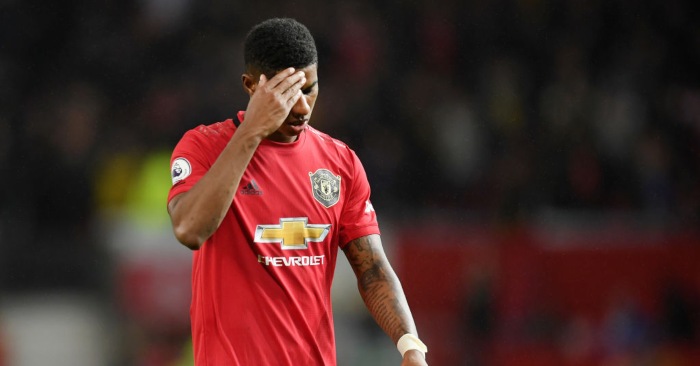 Talking total Rs
It’s been pretty much exactly 12 months since The Sun’s Neil Custis tweeted ‘Hope @MarcusRashford gets a run as a number nine for @ManUtd to give the team some movement up front’. Unfortunately, we cannot embed said tweet because we are blocked. Cannot think why.

By January, Custis had got his wish, and after a 2-1 win over Brighton that included Rashford’s fifth goal in six Premier League games under Ole Gunnar Solskjaer, The Sun man was giddy. Oh so giddy.

‘WHEN Cristiano Ronaldo left, so did much of the magic at Old Trafford. When Wayne Rooney reached his career tipping point, the goals were lost to Manchester United too.

‘Now the club could have both back – in the form of Marcus Rashford.

As we said at the time: God yes.

Less than nine months later, Custis is no longer so giddy. In fact, he is downright miserable at the thought of Rashford – now very much over the hill at 21 – leading the line for United. Which is odd for a footballer that is equal parts Ronaldo and Rooney.

‘Four years on there are more questions than answers.

Presumably that was established during that period when he was both Ronaldo and Rooney for all of ten minutes.

‘Southgate described Rashford as a work in progress.

‘But how much progress has their really been?

‘He has scored only ONCE in open play in the last 16 games.’

So are we no longer comparing Rashford’s return over his first 150 Premier League games to that of record goalscorer Alan Shearer and deciding that he is probably better than him too? It’s so bloody difficult to keep track of whether a young player is the next Wayne Rooney or the next Wayne Routledge these days.

Needs must
‘It was yet more confirmation, as if it was needed, that these two famous clubs are a long way from challenging for the title’ – Neil Ashton, The Sun.

They started the night 13 and ten points behind leaders Liverpool. It really wasn’t needed.

Go fourth and multiply
That fall from grace is the theme of almost all the coverage, as if the only interesting thing about this game was that it used to be more interesting. The Daily Mirror’s resident Arsenal fan John Cross was particularly alarmed:

‘But the real story of the game was just how far standards have slipped. Arsenal’s point pushed them up to fourth and Manchester United’s squeezed them into the top half of the table.’

And Arsenal have not been fourth on October 1 since 2015, which happens to be the last season in which the Gunners finished in a Champions League place.

Whisper it, but it’s not going that badly. As long as your point of reference is this decade and not the last.

Mediawatch’s favourite line is that ‘Arsenal, strangely, are in the top four’. They have lost just one of their first seven games (against the league leaders) so the top four is pretty much exactly where you would expect to find them, fella.

VAR from the issue
‘MANCHESTER UNITED’S problems piled up after VAR denied them victory,’ is the opening line on the back page of the Daily Mirror. It sounds simple but it really is utter bollocks.

Pierre-Emerick Aubameyang’s goal – and it absolutely was a goal – came in the 58th minute. Is it not possible that Arsenal might have had another chance in the final 30-odd minutes of the match?

Rescue act
Similarly, Arsenal were not ‘rescued by VAR’, as per the back page of the Daily Mail; they just scored a perfectly valid goal and that valid goal was validated by VAR.

Mediawatch looks forward to the day – is it coming soon? Please tell us it is coming soon – when VAR is quite rightly relegated to a footnote.

Revelations
Obviously the real Manchester United story is not that VAR ‘denied them victory’ but that they have endured their ‘worst start’ since the last time they suffered a ‘worst start’. Which feels like last week.

The Sun are so excited by this latest statistic that they stick a ‘REVEALED’ tag on a statistic that had actually already been ‘revealed’ (all lower case) by Neil Custis in the 16th paragraph of his quotes piece from Old Trafford on Monday night.

REVEALED: A statistic we told you hours ago before we realised it had SEO value.

‘Let’s not forget, Spurs have the same manager who led them to the Champions League final and to fourth in the Premier League five months ago, and with the odd exception, still have the same group of players.’

Let’s not forget, Spurs have the same manager who has so far lost ten Premier League games in 2019, making them only the eighth best team over the calendar year, and with the odd exception, still have the same group of players.

Arsenal, strangely, are in the top three.

‘The fact that we’re even having this conversation after seven games winds me up, because if you speak to players, managers and coaches in every dressing room up and down the land, they will tell you that they tend not to worry about things too much until eight or 10 games have been played, and Spurs could quite conceivably be third in one more game’s time.’

They could also end the weekend in 12th. Or – more likely than either scenario – they could end it still in sixth, and Spurs would still be below where they want and expect to be.

Has it actually been called a ‘crisis’ by anybody other than those angrily taking on straw men? No.

So is Collymore angry for basically no reason? Yes.

Will we remember his ‘cast-iron guarantee’? Hell yes.

Giggle watch
Apparently DeAndre Yedlin and Jamaal Lascelles were ‘seen laughing and joking’ on Sunday. It’s worth remembering this was ‘just hours after Newcastle’s pitiful surrender’ (The Sun).

Seb Stafford-Bloor on Jurgen Klopp and the Germany job

David Squires on the vote to be Arsenal captain