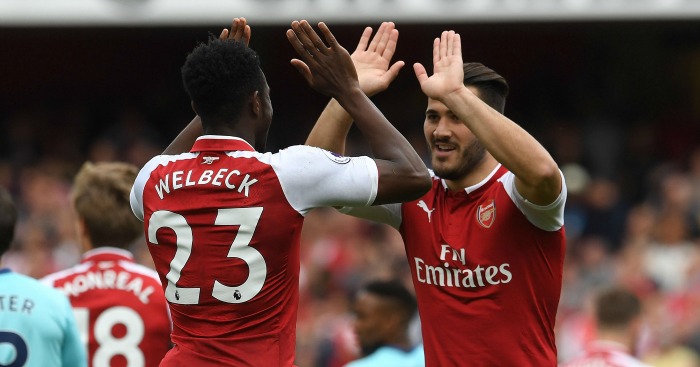 Time for another team of the week. You know the drill: man-of-the-match type performances, with an outstanding performance by a good player beating a good performance by a great player. It is worth noting that I watch every 90-minute match in its entirety.

Responding to suggestions in the comments, I’ve tried to go into a bit more detail without overwhelming anyone with analysis. This week it’s a 4-3-3.

Goalkeeper: Jack Butland (Stoke) No top performances this week, but England’s best came the closest. He did a variety of things well, including a super save on Lukaku where he was helpless on the rebound. But with the game on the line he misjudged a Manchester United corner, and was lucky to get the chance to recover. Asmir Begovic made a number of saves against Arsenal but had an even worse blunder/recovery. Heurelho Gomes delivered a second-half clinic on punching and claiming, but was otherwise barely tested. Classic individual saves from Lukas Fabianski and (wow!) David de Gea.

Right-Back: Cédric (Southampton) Got forward a lot in the second half as Southampton chased the game, and sent in three dangerous crosses, but he’s mainly here for his defence. When he could afford to stay back, he almost neutralised Richarlison, which is saying something. And how’s this for a stat line: 10 tackles, four interceptions, three clearances. He’s a European champion, remember?

Centre-Half: Christian Kabasele (Watford) A truly remarkable show from a player who until Saturday had yet to show he belongs in this league. You name it, he did it: covering, marking, clearing, blocking, stepping up to intercept. Occasionally looked a bit raw, but if this wasn’t a fluke, the Hornets have a sure starter for the rest of the season.

Centre-Half: Ciaran Clark (Newcastle) To some degree this selection is sheer stubbornness. But this morning my therapist warned me against Garth–Crooks–ism, and I’m taking her advice seriously. Jamal Lascelles scored a thumping header to win the match, and received all the plaudits. But in his primary role, defending, he was beaten three times, resulting in three Swansea chances. Twice Rob Elliot made a good save, once Lascelles himself recovered for that goal-line clearance. Otherwise he was definitely good, but not exceptional. Clark was better. He too was beaten and lucky to escape, but only once, by Alfie Mawson on a corner. His passing wasn’t as good as Lascelles’, but his marking was better, his clearances were stronger, and overall he was the more valuable defender. If you think the goal should put Lascelles over the top, I won’t argue. But Clark was better. (Elsewhere, Cesar Azpilicueta had a strong overall performance, also marred by a big mistake.)

Left-back: Sead Kolasinac (Arsenal) The toughest choice of the weekend, providing a fascinating contrast. Kolasinac and Ben Davies were both excellent in attack, somewhat wanting in defence. In a close-marking, press-oriented game, Kolasinac constantly drove forward, showing superb technique in short pass combinations and getting free for dangerous crosses. Davies, on the other hand, was given space from here to Saturn by Cuco Martina. So although he too made a huge contribution, he had a slightly easier task. He was tested more on defence, but also came up short more often. In the end, either would have been a good choice.

Deep midfielder: Mikel Merino (Newcastle) If you tuned in on Sunday to watch a loan player from a big Bundesliga club show his stuff, you got your wish, but it was Merino, not Renato Sanches. Absolute quality both in defence and attack, and whenever Sanches wandered into Merino’s precinct he got nowhere fast. Probably should be docked for the dive, but wins out anyway. Abdoulaye Doucouré is the yin to his yang: spectacular instead of steady. He had an excellent first half, including an outrageous long-distance goal, but wasn’t involved that much after the break.

Attacking midfielder: Kevin De Bruyne (Manchester City) In going back over the video, I was surprised to see how many of his second-half passes were ever-so-slightly less than pinpoint. His set-pieces weren’t up to his usual standard, either. But when you’re making those kinds of pathetic picky criticisms, you know he was something special.

Attacking midfielder: Pascal Gross (Brighton & Hove Albion). He actually had a pretty ordinary first half, scraping an ugly goal just before the break. But his second half was a thing of beauty, even leaving out the long-range strike. He showed some excellent one-touch passing, pushed forward confidently, crossed to perfection. He’s economical in his movements, and almost in the Santi Cazorla class for two-footedness. Hope he keeps it up.

Wide attacker: Danny Welbeck (Arsenal) He might have made this list even without the brace. Bournemouth couldn’t handle his pressing or his movement. Only 35 touches, but every one seemed to be useful. Combined well with both Kolasinac and Alexandre Lacazette. Somewhat lucky on the first goal, but the second was a peach.

Wide attacker: Maxim Choupo-Moting (Stoke) Another brace, but a very different kind of performance. Mark Hughes’ instructions must have been something like “Get the ball in attack as often as possible and do something with it. Otherwise, stay out of the way.” He did both superbly. What impressed most was the variety of his attacking play: passes, dribbles, headers, it all came off.

Central striker: Sergio Aguero (Manchester City) It’s safe to say Liverpool were not at their best. But Aguero’s two goals (Gabriel Jesus scored the second but we all know it was Aguero’s in spirit) were beautifully pure striker play. On the first, he lets the ball run across his body; on the second, he stops the ball smoothly with his left foot and moves it onto his right. It’s all done so simply. Oh, and if you have the video, watch in the 34th minute when Jesus is driving toward goal on the right and Aguero takes up a perfect position for the cutback. It never arrives, but could easily have been another goal. I can see reasons to pick Harry Kane and Alvaro Morata, two different kinds of striker who excelled in their respective ways. But Aguero just seemed more magical.