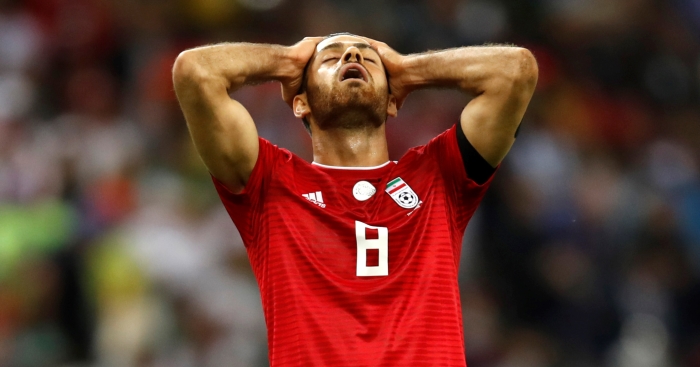 The wait for the 2018 World Cup’s first 0-0 draw goes on, but you cannot fault Iran for their efforts; it was the only deadlock they truly hoped to break. They frustrated and foiled Spain for 54 absorbing minutes, embracing their role as David against the might of Goliath. The giant’s nose was bloodied and his short torn by the end, but he eventually prevailed.

There was little mystery as to how Iran would play when they arrived in Russia. A team that had conceded just five goals in 18 games in qualifying had long identified a system and approach and refined it to the point of near-perfection. Carlos Queiroz’s side had kept ten clean sheets in their last 17 games, and were four years unbeaten in a competitive fixture.

It was easy to see why. Thirteen players made at least one clearance, while eight committed at least one foul. Milad Mohammadi played just 22 minutes as a substitute, and completed four tackles. This was a team effort in every sense.

Their piece de resistance came on 70 minutes. A well-worked Spain corner found its way to Sergio Ramos, whose shot was blocked on the line by Ramin Rezeaien. Three Spain forwards attempted to force the ball an extra inch or two further, but they were greeted by one Iran goalkeeper and four defenders. Defence and attack merged in an engrossing flail of limbs.

If Iran were more defensive than your father is when asked about his internet search history, Spain were as probing as your mother would be in the same situation. Isco was again the instigator, laying out his tools as he sought the slightest cracks in the wall that had formed in front of him. Andres Iniesta danced and drove; David Silva drifted.

Try as they might however, Spain could not break the Iranian resolve. By half-time, their exasperation was palpable. Iran’s players took it in turns to fall to the floor and feign injury at every possible juncture – there was more playacting than a hyperactive amateur dramatics production. When Sergios Ramos and Busquets are left complaining to the referee about timewasting and gamesmanship, you know that half the battle is won.

As Iran’s confidence grew, so did their ambition. Their two shots in the first half were speculative, but Karim Ansarifard’s effort early in the second was almost spectacular. The stadium postponed their Vuvuzela resurrection tribute concert to erupt in celebration, only to realise his stinging volley had rattled the side netting.

The cruel mistress that is football was poised to strike. One minute later, Diego Costa barged his way through before turning cleverly in the area. Rezaeian came racing in to complete yet another tackle, only for the ball to rebound off the striker’s shin and past Alireza Beiranvand.

It was the one factor Iran could not legislate for: fortune. A defence can be as well-drilled as possible but one lucky – or unlucky – touch causes the whole pack of cards to collapse.

They tried to claw back the deficit, but to no avail. Chances came and went for Sardar Azmoun, Vahid Amiri and Mehdi Taremi, with heartbreak coming when VAR ruled Saeid Ezatolahi’s strike out for offside. Spain were there for the taking, but Iran could not oblige.

For a team expected to be the weakest in a group containing a European champion, an African champion and the perennial winners, it was an admirable effort.

It was also a reminder that defensive football needn’t be so restrictive and suffocating. Iran arrived with the intention of thwarting Spain, but armed themselves with enough endeavor and ambition to test them too. This was not simply defending for defending’s sake: it was the enactment of a game plan that may well have succeeded were it not for one moment of misfortune. Spain ran the Iran gauntlet, and only just survived.

The criticism will flood in for their approach, but this match was as engrossing for their determination as it was Spain’s mesmeric passing. And Iran have danced this particular dance before.

“Reputation doesn’t win games,” said Queiroz when Lionel Messi earned Argentina a 1-0 win in stoppage time four years ago. “We competed, but today we had two great teams at different levels: some using genius and some using hard workers to play football.”

Same manager, same team, different tournament, same story. Iran do still have their fate in their hands – although one might advise against watching that meeting with Portugal.