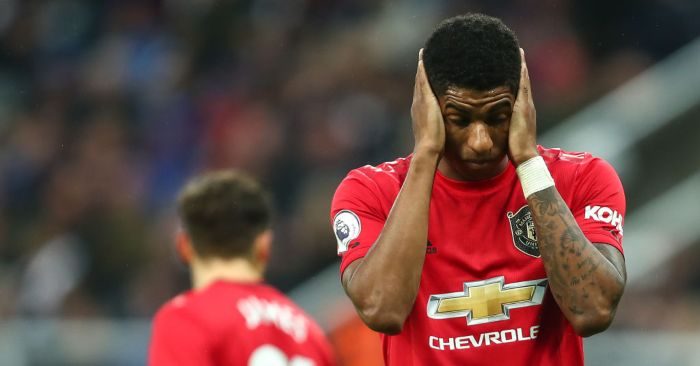 Ole Gunnar Solskjaer has admitted that he “can’t really give Marcus Rashford a break” due to Manchester United’s limited attacking options.

Solskjaer has overseen the club’s worst ever start in the Premier League and a lot of criticism has been aimed Marcus Rashford’s way for failing to score enough goals.

The United boss has brushed off claims he should have kept one or both of Alexis Sanchez or Romelu Lukaku in the summer, claiming he did not regret his decision to allow them to leave for Inter Milan.

“At the moment we can’t really give him a break because we’ve had injuries,” Solskjaer told Sky Sports.

“Anthony [Martial] has been out for eight weeks now. So he’s had to play loads more football than I’d hoped.

“Marcus is a centre forward who can play left, right and as a No 10. He wants to be able to play all the positions.

“I want him to be facing the goal, I want to be direct and attacking quickly, so at the moment I see him coming in off the left or as part of a two up front.”

Rashford has scored just once from open play for United this season – but did get a goal for England in the 6-0 rout of Bulgaria.

“Marcus’ movement is great, but maybe we just need to give him a game or two of rest because he’s played a lot,” Solskjaer added.

“Sometimes, because he’s a young boy with lots of expectations on his shoulders, he’s played four or five seasons now, and yet he’s still not even 22 yet.

“He’s a scorer of great goals, as he did for England. I want him to become a great goalscorer – and that’s a different mentality. At the moment, he’s learning his trade.”