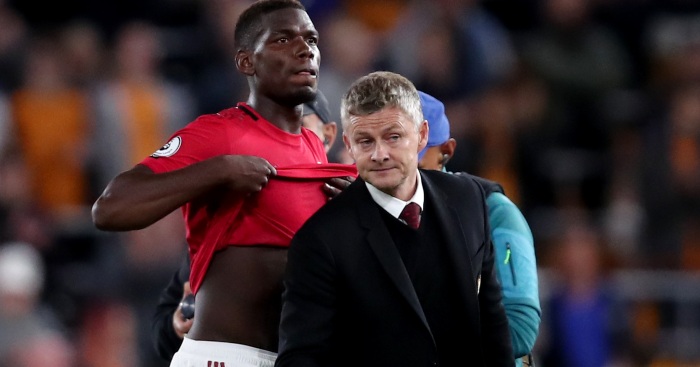 Pogba saw his second half spot-kick saved by Rui Patricio after an apparent debate with Marcus Rashford over who should step up to take it.

After watching his side take a deserved lead through Anthony Martial only to be pegged back by Ruben Neves, Solskjaer dismissed the penalty confusion, insisting both Pogba and Rashford are designated to take spot-kicks for the club.

Solskjaer said: “The two of them are designated the penalty shooters and it’s up to them there and then who feels ‘this is mine’.

“Sometimes players just feel they are confident enough to score – Paul has scored so many penalties for us and today Rui Patricio made a good save.

“The two of them have been very confident. I like players with confidence and the feeling that ‘I can do this’.”

🤨 Needless to say, Ole Gunnar Solsjkaer stuck up for both Paul Pogba and Marcus Rashford over #MUFC's penalty farce.

"The two of them are designated the penalty shooters and it's up to them there and then who feels 'this is mine'."#MUFC pic.twitter.com/9CSXRfPr5D

Rashford added: “Paul wanted to take it – it’s that simple.

“Everybody can miss a penalty. He’s scored countless penalties for us so it’s normal to miss one.

“I took one last week so for me it’s no problem for him to take one this week. It’s unfortunate he didn’t score but it’s not on him, it’s as a team and we take it forward to the next game.”