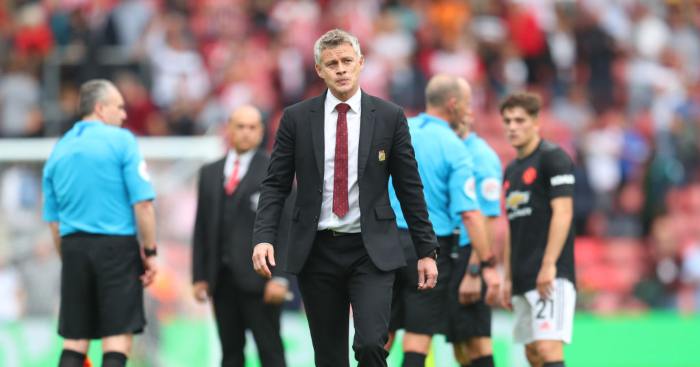 Ole Gunnar Solskjaer reportedly lost his cool in the Manchester United dressing room following their 1-1 draw on the road at Southampton.

United have an outstanding record at St Mary’s and Solskjaer’s men looked on course for a first away win since their jaw-dropping Champions League triumph at Paris St Germain.

But the visitors were unable to build on Daniel James’ beautiful early strike and Jan Vestergaard levelled after the break, with Saints holding on for a draw despite Kevin Danso’s sending-off leaving them under the cosh.

The result over the weekend means they have taken just five points from their opening four matches of the season and find themselves seven points adrift of leaders Liverpool.

And The Sun claims Solskjaer ‘lost it’ following United’s performance at St Mary’s after becoming ‘particularly frustrated’ with their inability to ‘implement what they work on all week in training’.

In the dressing-room ‘rant’ Solskjaer called his players’ display against Southampton a ‘joke’ and told them it was becoming ’embarrassing’ that they ‘were failing to finish teams off’.

With Leicester their next opponents after the international break, Solskjaer warned his players that they will be in ‘serious trouble’ if they don’t start performing.

The Sun adds that Solskjaer accused individuals of lacking effort but he ‘refused to name names in front of the squad’.