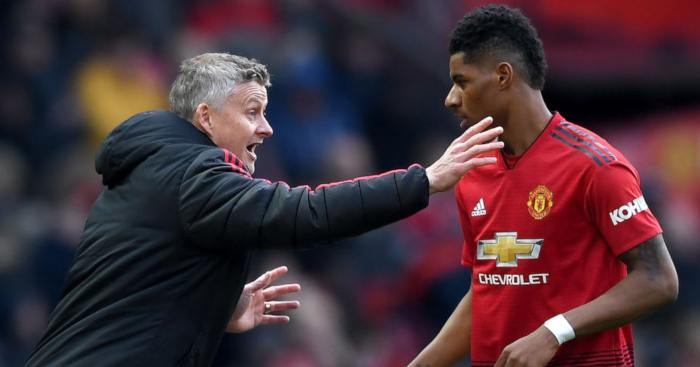 Manchester United boss Ole Gunnar Solskjaer has reportedly become concerned over interest in Marcus Rashford that has led to a change in the forward’s ‘demeanour on the pitch’.

Rashford was among the Red Devils players whose form has sky rocketed since Solskjaer replaced Jose Mourinho in December, scoring nine goals in all competitions since.

That form has led to reported interest from La Liga giants Barcelona, who could bid in the region of £100million.

The England striker is out of contract at the end of next season, and although United do have the option to extend that deal by a further year, it is claimed that Rashford is hesitating over agreeing to the extension. According to the Daily Mail, Rashford wants wages of £200,000 per week to keep him at Old Trafford.

As United start to worry that Rashford wants out, the report suggests that Solskjaer has noticed a change in his behaviour. According to the claims, Rashford is beginning to cut a frustrated figure when things aren’t going his way and is starting to sulk, something which is out of character for the 21-year-old.

Solskjaer is concerned that this may be a sign of Rashford’s discontent at Old Trafford, meaning the Barcelona move could be on.

Ernesto Valverde’s side are looking for a long-term replacement for Luis Suarez, and reports in Spain have suggested they could offer one of three stars to United in return for Rashford.