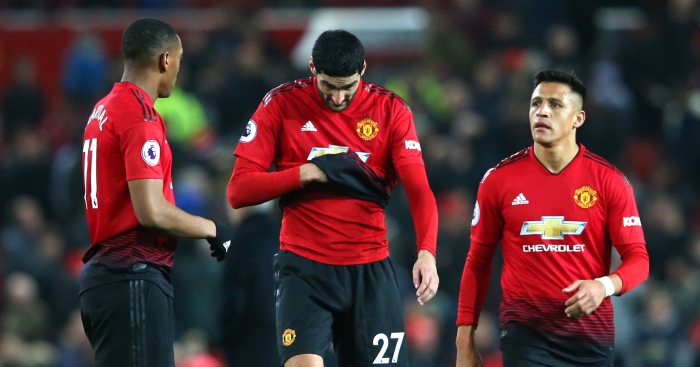 Ole Gunnar Solskjaer has confirmed that Marouane Fellaini will be sidelined for “three or four weeks” with a calf injury.

Fellaini has hardly featured this season after having his United contract extended in the summer.

And he will miss even more game time over the next month, with Solskjaer confirmed the “sad” news of his injury.

“He’ll probably be at least three or four weeks, he’s got a calf problem and that’s sad,” Solskjaer confirmed.

“There’s an X factor in different players and we all know Felli’s X factor.

“He’ll be working hard to get back in when all the big games are coming as well.”

Solskjaer confirmed that Fellaini would be their only “long-term” absence against Brighton.

“There’s not many issues, I think just small niggles as there always is at this point of the season.”

“Chris [Smalling] and Marcos [Rojo] just started running lightly so are not fit yet. Alexis has trained all week so hopefully he’ll be available and Felli is the long-term one that’s out. He’ll be out for a few weeks.”

The interim manager added that Fellaini’s injury has ended any potential plans for Scott McTominay to leave on loan.

“Scott is working hard, he’s a young boy I still believe in, we’re working on his contract,” he said.

“With the injuries of Felli as well and the squad we have I’m not sure we’re going to see any movement.”