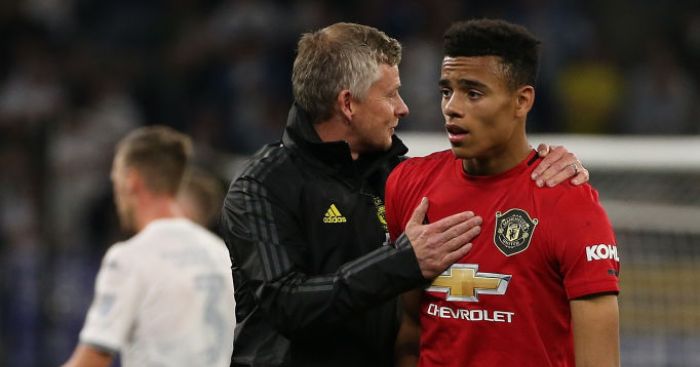 Ole Gunnar Solskjaer has continued to bang the drum for Mason Greenwood, as he confirmed his starting place for Man Utd against Astana in the Europa League on Thursday.

The young Englishman may have expected more playing time this season, after his manager described him as United’s “most natural finisher”.

But Greenwood has only had 47 minutes on the pitch so far.

“He (Greenwood) is better than me now, that’s for sure!” Solskjaer said.

“He’s still very young but he’s maturing and he’s developed so much since I came in.

“The kid who just wanted to play with his mated in the U18 and now he’s knocking on the door wanting to play more.

“His appetite for football is growing I don’t want to put too much pressure apart from go out there and enjoy yourself and work hard.

“He’s one of the best finishers I have seen go out at Old Trafford and enjoy it.”

Solskjaer also confirmed the reasons for selecting some of the fringe players for the Europa League.

He said: “Every team selection will depend on who’s fit, where we’re at, what’s coming after, who needs games, it’s not set in stone.

“The youngsters might play in the league, it’s just decisions we have to make at the time it might be the experienced ones who need the experience in the Europa League.”

OK Ole, we know you think he is your “most natural finisher” – we’ll reserve judgement until he plays enough to do some finishing.