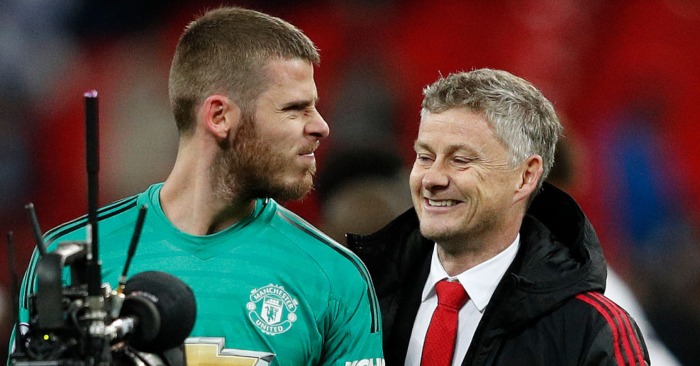 Ole Gunnar Solskjaer believes tying David De Gea down to a new deal will be an important statement of intent as Manchester United look to challenge for trophies again.

The Old Trafford giants’ struggles since the retirement of Sir Alex Ferguson could have been a whole lot worse were it not for the 28-year-old goalkeeper.

De Gea’s fine form has led to regular speculation about his future since joining from Atletico Madrid in 2011, with only paperwork preventing him returning to Spain with Real Madrid four years ago.

The shot-stopper knuckled down and signed an improved deal at United, but that contract expires at the end of the season and talks over an extension have dragged.

There was growing confidence over the summer, both publicly and behind the scenes, that a deal was close –  there are whispers it has already been signed – and manager Solskjaer remains determined to keep De Gea in the north west.

“I think you need to ask David and the club (why the deal had not been sorted yet),” he said.

“I’ve obviously not been involved in all the discussions, but I’m very – or pretty – confident that we’ll get this sorted.

“David’s never, ever said anything else to me than he loves this club, he wants to stay here and he’s had a fantastic time, so let’s hope we just get it over the line.”

Juventus and Paris St Germain are among those to have been linked with a move for De Gea.

“Well, we’re always aware of what’s happening around in the world,” Solskjaer said when asked about contingency plans.

“We want players here, the best ones, and the ones we want most of the time stay. There’s not many we want to keep that we don’t manage to keep.

“I have got two very good back-up keepers, with Sergio (Romero) and Lee (Grant), Dean (Henderson) is playing at Sheff United, so the goalkeeping department is in good health.

“And, as I said, I am confident that we will manage to convince David that here is the future for him – and it is a successful future, it’s a club that wants to get back to winning trophies.”

Put to Solskjaer that a new deal for De Gea is also a statement as United do not want other clubs thinking their best players want to leave, he added: “Yeah, definitely. Because we have gotten used to top keepers here.

“You’ve got (Peter) Schmeichel, De Gea – we want the best ones – and (Edwin) van der Sar. Edwin’s getting too old now, he did OK in the (Vincent Kompany testimonial) game.

“And, no, for me we want to build a winning team again, that’s challenging for trophies.”

Solskjaer remains “confident in what we’re doing” in that process and United will look to end a three-match winless streak when Leicester visit on Saturday.

The Red Devils boss underlined the importance of scoring the goals that reflect their play, but De Gea will need to be alert to keep the Foxes at bay and will be desperate to impress after his gaffe as their last home match ended in a late defeat to Crystal Palace.

“I think he’s had a fantastic time here,” Solskjaer added.

“Yeah, of course, whenever he concedes a goal, it’s headlines that he should have saved (it).

“Whenever we lose a game… we’ve lost one game since July 1st and it sounds like we’re really struggling, but that’s just the way it is at Man Utd and you have to handle it.

“You have to be resilient, you’ve got to have robust confidence and he’s fine. I don’t worry about him at all.”