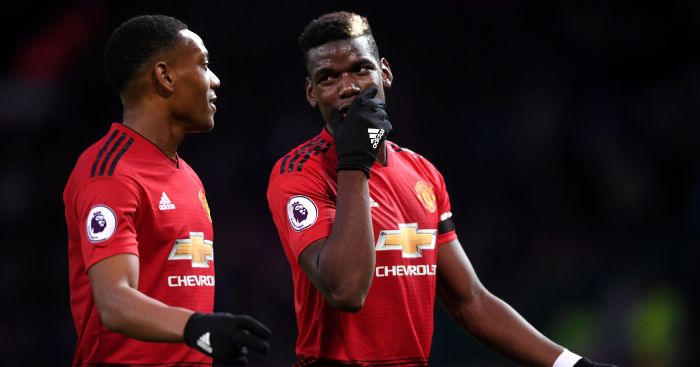 Ole Gunnar Solskjaer has explained how he will get the best out of players such as Paul Pogba at Manchester United.

Solskjaer was appointed as Jose Mourinho’s replacement at Old Trafford on an interim basis earlier this week.

It brings to an end a long and bitter feud between Mourinho and Pogba, who reportedly celebrated when the Portuguese was sacked.

Pogba has been far from close to his best form this season, but Solskjaer believes he has what it takes to get the best out of him and a wholly under-performing squad.

“We play at Manchester United, you play without fear,” he said, sounding just like his predecessor.

“It’s about getting every player to their best, speaking to them on the training ground, discussing philosophy, principles, how we want to play.

“It doesn’t matter what team you’re coaching, they all want to have a picture of how you want to play.

“We have quality players so it will be easier to get them expressing themselves. You play with courage, go out there and express your skills.

“Ferguson always said “go out and express, take risks”. The last game he had as a manager was 5-5 – that was almost the perfect end to him as a manager and I want the players to be similar, be the kids that love to play football and go out in front of the best fans in the world.

“I know a few, had them in the reserves and they’ve been great.

“My job is to help the players and make them grasp the opportunity now. They all want to be part of Manchester United and I am here to help them.

“When you are Manchester United there are a set of standards and demands that you have to be a team player. I don’t think there are any players who have been on the bench more than me.”