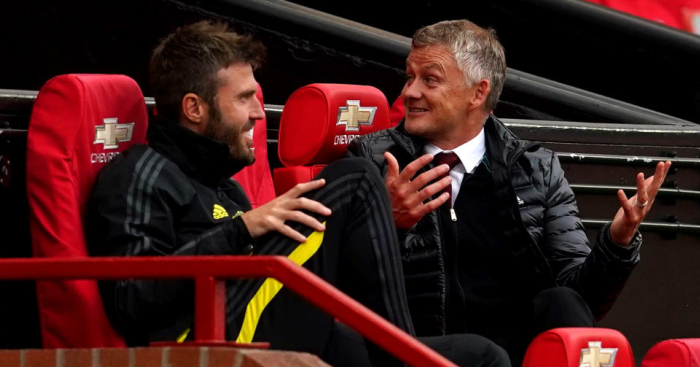 You Stick Your Ole In, You Stick Your Ole Out…
If I’ve got my calendar right, this is Ole-out week. But looking at the minutiae trotted out by both sides (along with some excellent arguments btw), I’ve started thinking about how much importance we give to managers and tactics. Sometimes it seems like a throw of dice. And after all, you really can’t keep tactics a secret, can you, so technically, successful tactics should be easy to copy or counter.

It strikes me that football is usually a game of fairly fine margins. In 1999 if Bergkamp scores the penalty in the FA Cup semifinal replay, then he probably changes the course of history (and of knighthoods). Or if Roy Keane doesn’t score that goal against Juventus, or if Collina gives 2 minutes of injury time instead of 3 in the Champions League final. Alternatively in 2008, if Martin Atkinson awards the penalty in a quarterfinal against Portsmouth that he should have, then perhaps United go through and are odds on to beat West Brom and Cardiff to give Fergie his second treble. But wait, what if John Terry doesn’t slip in Moscow? You get the idea.

We should stop ascribing every individual win and loss to managerial genius / managerial buffoonery. Managers can only be evaluated for their body of work and presumably their league positions or win ratios over time. And as a great man once said, you have to be a lucky manager, not just a good one. Hind sight is wonderful, but decisions are presumably a little bit harder when you’re actually making every call in real time, in the heat of the game.

On which note, I think Solskjaer is not a genius, but he’s not a mug either. He’s improved the squad, improved the entertainment value by playing more offensive football, and has made bold decisions, albeit not all have come off. But that again is par for the course. I’m pretty sure very few United fans want LVG or Jose back. So he’s doing a better job than some big names managed. The rest involves a lot of luck, which will even out over time. In this season any team which wins 3 games in a row seems to shoot up the table, so I think a manager who finished third last season deserves to be given time before we all rush to judgement.

What conundrum?
I disagree that United are a conundrum, it’s very obvious what’s happening. They’re a poorly coached, poorly managed team, who don’t have an identity or a system. But they have some truly excellent players. Put those players under one of the great coaches in the league like Nuno, Jose (this squad is far superior to the one Jose had there)or Pep and they’re winning the league and pushing hard for the champions league
John Collins, Wolves, London

Woeful wombles…
Its the beginning of the 2nd half.
Ole Gunner Shambles has just removed Donny Van De Beek and Edinson Cavani after watching Paul Pogba and Anthony Martial play like utter wombles.

Wonderful womble
What a strike from the Womble.

If he did that more than once a season, i might be happy with him being at my club.
Mark Endicott, MUFC

Free ride for Ole
I was very annoyed with the media (yourselves included) for the reaction to the PSG game during the week. I felt United played well and were unlucky with the result, that the game was decided by missed chances from Martial rather than any tactical faux pas from Ole. So I was surprised when I saw the volume of criticism directed his way. On the other hand I do accept that results are what managers are mostly judged on and not performances.

West Ham was entirely different however. I hope that the media don’t give Ole a free ride here because that was awful. One of the worst performances of the season, which is saying something. The individuals bailed him out tonight as they so often do, this was no surprise given the individual quality of Bruno, Rashford, Pogba, Greenwood etc.

The main defence I would have for him so far in his United tenure is that the signings are improving the side. The main criticism being that we don’t see consistent patterns of play, and the team look poorly coached, which may be a consequence of putting two coaching novices in Carrick and McKenna in charge of coaching one of the world’s biggest clubs.

This is not to say I want to see him replaced, as I’m terrified what the fools who run the club will do next (Avram Grant might be available). I like most fans are hoping for him to be a success, which for me would be becoming champions league regulars again and challenging for major trophies in the next 2 years. I just don’t want anyone at the club thinking that performance was in any way acceptable just because it ended in victory and to just sweep it under the rug. Another performance like this on Tuesday and it’ll be Thursday night football again.
Stephen, Ireland

Here’s something you said:

“There was lots of talk of momentum at the end of last season, how United would could kick on to challenge for the title. Some even predicted them to win the thing. Now – after nine Premier League games – it’s Chelsea and Tottenham who are being touted as contenders while United are just about cobbling together enough points to make the top half. ”

Yet at the end of United’s game we were level with Chelsea having played the same amount of games, and two points behind Tottenham. I mean, come on guys.
Gaaavie, Kaapstad

Mostly agreed with Will Ford’s latest take down of United, though to be fair it’s hard not to when the focus is Ed Woodward. However, he probably should have waited until later in the day to make the following statement:

Now – after nine Premier League games – it’s Chelsea and Tottenham who are being touted as contenders while United are just about cobbling together enough points to make the top half.

And after ten games, having now played the same as everyone else they’re two points off the top. Does that mean everyone in the top half is struggling to get enough points to be in it?

It’s been a weird season, United have been largely rubbish, I fully expect them to end up in tenth come the end of the season. Yet they find themselves level on points with Chelsea (they’re currently 0-0 with Leeds though) who massively outspent United this summer (granted they didn’t spend the previous summer though did bring in Pulisic). We’re also six points clear of Arsenal, who’s manager has widely been fancied as the next big thing, despite them beating us.

I know we’re a bit shit and have spent a lot of money but could you just lay off the only team with 100% away record so far this season  just a little bit? Jose has been given some serious love for refinding his mojo this season and Spurs are seriously thought of as title contenders. Ole is a complete “PE teacher”, yet sits 2 points behind Jose despite Spurs rinsing us at Old Trafford. Pick on Woodward all you like, but let’s see where the team lie at the end of the season.

I’m sticking by my prediction of 10th mind and I reckon Ole will be sacked on 16th January 2021. You heard it here first.

A Lane crisis
Now that the journalists have hyped up Tottenham having the fans advantage, they are going to lose against the hapless Gunners aren’t they?Crisis is back soon at Lane.
The Vocal Minority

Pathetic Millwall
Lockdown has been great for the past 9 months, no racist incidents from fans!Took a couple of hours and significantly reduced capacity for it to come back though.
Pathetic response from Millwall players and the club though, catering to the racists and they should all be thoroughly embarrassed, but seems the club have no intention to accept black people as equals in society.
KC

Something a little different
Morning everyone

I thought I’d have something a little different today.
This is my media watch from football site headlines.  I’m not even reading the articles.

Solskjaer “excited” by Man Utd evolution.  Hits back at suggestions that Man Utd are inconsistent.
Ole, you look like you get excited by an advent calendar mate.  The second bit, I’ll let you decide. (shaking head in disbelief)

Who should be Chelsea’s central striker?
Maybe the guy who bagged you a hat trick the other day?  Has never really let you down and has a beard that I only wish he could transfer to my face.

No love lost as Lampard reunites with Bielsa.
Neither probably care.  They’re not reuniting.  Stop trying to antagonize a nothing situation.

Arteta. Too early to call Spurs title contenders.
Well, guess he wasn’t going to say Spurs will win it was he?

Back this Dendonka at 7/2.  Jones knows.
We’re all skint mate, you’re charging us 10 times what the rest of the world pay to watch us.

Does Arteta need to change his approach at Arsenal?
Probably.

Zidane. I have Reals complete backing.
You’ll be sack before Christmas dude.

Klopp saying England will struggle at next years championship if they don’t allow 5 subs.
Yep, that’ll defo change their minds.

I can’t do this anymore.  Football journalism is shocking.  A club insider = the guy wo write it.
I haven’t bought or read a newspaper for years because it was so bad. The internet is just as woeful and I wont even touch twatter.  The people that write in to 365 and most of the ones who comment can do a far better job.  Even the emails I don’t agree with are more interesting and entertaining that what the main stream clickbaters (had to double check that word) throw out every day.
You have to go to Journalism school these days, why?  I doubt most you lot have and you write in some pretty good stuff.
Marc the Mancunian

Lampard masterclass
Can’t fault Leeds too much today – the amount of catching up to do to be a big player again is evident after that match. Lampard got the tactics spot on.

Huge victory against a seriously difficult Leeds United side, a great end to end game in the first half and Patrick Bamford punished our one mistake all game with a tidy finish, but our response was brilliant, especially in the second half!

Olivier Giroud showcasing his ability to be in the right place at the right time, Mason Mount was again solid and his stamina is outstanding.

The only downside was of course Hakim Ziyech coming off with a knock, fingers crossed it isn’t anything keeping him out long term.

A special mention goes to the 2000 fans inside Stamford Bridge, boy have we missed that atmosphere, it sounded like so many more than just the 2000 allowed inside and that is top class support.
Mikey, CFC (Top of the league……for now)

Just a thought
Why don’t they allow five subs, but insist that 2 of the subs must be under 23, with less than 20 first team appearances, also need to allow a larger subs bench for it.

Separate mailboxes
Hey guys, can we just get two separate mailboxes to send opinions into? Its really hard on my finger to have to scroll past all the United/Chelsea/Arsenal every single mailbox.

Even harder for my eyes when I see its the same opinions being thrown around using different words. Week. After week. After week.
N.V.M. (The CTR may just surprise you!)