Solskjaer echoed Fernandes' claim that "outsiders" would have no influence on the "united" nature of the dressing room. 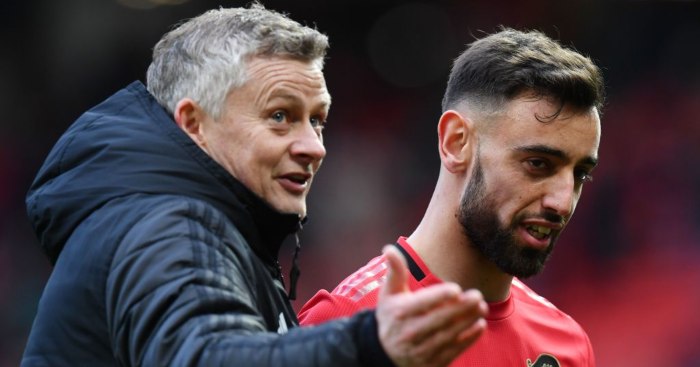 Ole Gunnar Solskjaer has praised Bruno Fernandes for his response to questions about a rift in the Manchester United dressing room.

The Portuguese playmaker was replaced at half-time in the 6-1 defeat to Tottenham and various reports claimed there was a bust-up between him and Solskjaer.

But Fernandes rebuked the claims, insisting “outsiders” would have no influence on the “united” nature of the dressing room.

And Solskjaer echoed his player’s thoughts, revealing that the club had remained in contact with those on international duty to ensure there was no discord.

He said: “We’ve been in touch with the ones that have been away and it’s one of those things you have to get over as soon as you can, we know any little chance from outside wants to create division. Bruno spoke well the other day we are united and have to stay together, we can’t listen to everyone outside, gotta get on with it.

“Bruno has lost two league games and came in February, it’s been two in quick succession, he’s not used to losing league games but welcome to Manchester United this is what happens, gonna try and create a division between us but it’s not gonna happen, this is a group that wants to work together and stick together.”

Further reports emerged on Friday, hinting that Solskjaer may have lost the dressing room, with one player claiming “training is so basic”.

And Solskjaer admits his side have got off to a bad start this season and recognises they “have to perform better”.

“We know we’ve started the season badly and that game ended really badly, we started well and after the sending off with 10 men we couldn’t hold on or get a result, when we got the 3-1 just after the sending off, the extra hope went and we know we have to perform better but we’ve now had two weeks to think about it, work on it, the others who were here, the ones on internationals had positive and negative experiences.”