Home All The News Solskjaer hits back at Neville, Evra over new Man Utd man 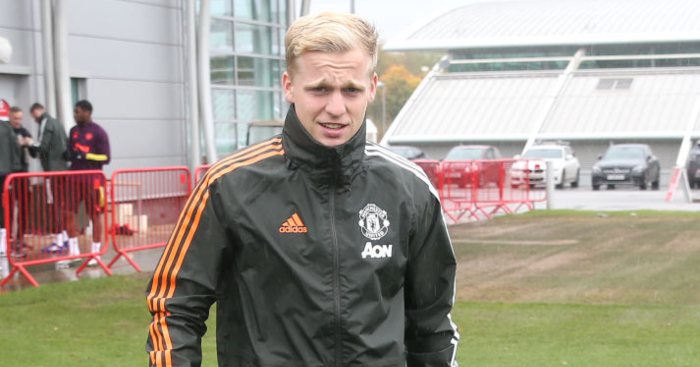 Man Utd boss Ole Gunnar Solskjaer has hit back at the likes of Gary Neville and Patrice Evra for criticising their purchase of Donny van de Beek.

The 23-year-old is yet to make a Premier League start for the Red Devils, despite scoring on his debut against Crystal Palace, failing to even be brought off the bench in a drab draw with Chelsea on Saturday.

Van de Beek has played a combined 61 minutes for Man Utd in four substitute Premier League appearances, while his two starts so far have come in the League Cup.

Evra declared over the weekend that Man Utd “don’t need him” while his former team-mate Neville questioned his signing as “a little bit of a mystery”.

And now Solskjaer has hit back at the pair and other former Man Utd players, he said: “At the moment, I realise the topic is Donny van de Beek and it’s nice for some [ex-]players or commentators to have a little go.

“And I know that you’re short for time when you’re on telly and you have to put your points across very quickly. But you have to know that you don’t have to start the first three games to be a very important player in a squad.

“And I would be disappointed if some of my teammates said I wasn’t important at Man United but I didn’t start many games. So Donny is going to be very, very important for us, don’t worry about that.”

Solskjaer added: “When players come into a new league, a new team, there’s always going to be a time that he adapts.

“Donny has played and when he has played he’s played really well. I think it says a lot about our depth of quality in the squad that we don’t have to use him every single game, because we have other players as well.

“And I also think it says everything about our ambitions. We want to push on, we want to go and challenge for trophies this season. Donny is going to play a big, big part this year.”