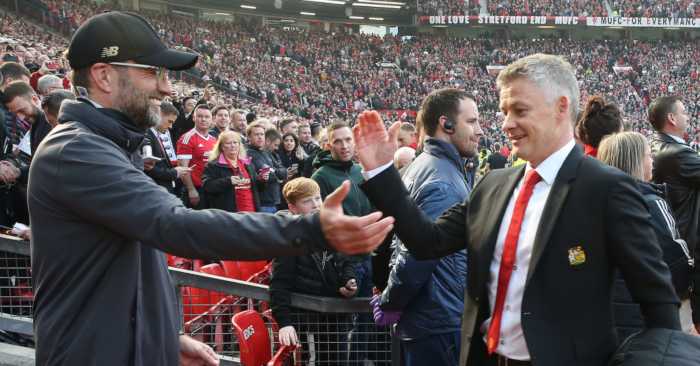 The title is the Reds’ 19th, putting them one behind United for most championships won.

Solskjaer, who won the top flight six times as a United player, said: “First of all, any team that wins the championship and a Premier League deserves it and they deserve credit, it’s a hard league to win.

“So well done to Jurgen [Klopp] and his players. Every time you see anyone else lift the trophy it hurts.

“I reckon that’s the feeling everyone associated with Manchester United – all our players, staff supporters – we want to get back to winning ways and that’s our challenge.”

Despite Liverpool’s dominance this season, Solskjaer doesn’t think Klopp’s side are in a position to consistently deliver titles over the next decade in the way that Sir Alex Ferguson did at Old Trafford.

And the United boss claims his side’s “challenge” is to avoid going too long without winning the league again, in a not-so-subtle reference to Liverpool’s lengthy spell without the top prize.

“The run of titles that we won under Sir Alex, I don’t think that’s going to be easy for anyone to emulate or copy,” he added. “Sir Alex was a master of staying at the top so, for me, our challenge is to make sure we don’t go, say, 26 years or more until the next time we win it.

“We’re going to do everything we can to shorten the distance or even go past them, of course.”

United are currently in fifth place in the Premier League table, 37 points behind the champions and while Solskjaer is keen to see his side close the gap he wants them to focus on other priorities first.

“I don’t think it is time to say how far behind [United are]. We are in a position where we have to improve, we have to get into the Champions League, get higher up the league and start challenging for trophies,” the Norwegian said.

“That consistency and efficiency they have shown – that is a challenge for us as well. We know at our best we are very good. We have to do it again and again and that is the challenge for our players going forward.”