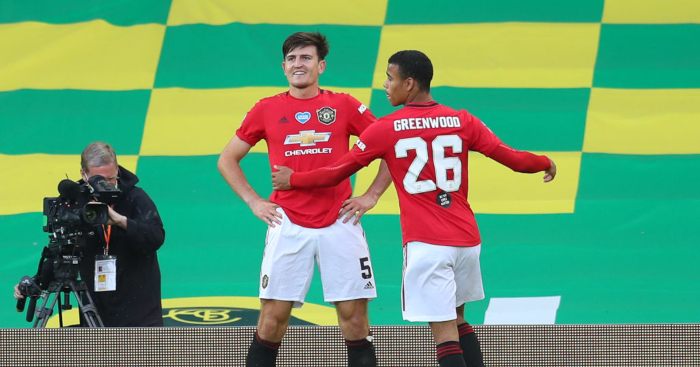 The Red Devils will look to build on their 4-1 victory away at Newcastle United at the weekend and an impressive 2-1 win against Paris Saint-Germain in midweek, when they face Frank Lampard’s side at Old Trafford.

At this early stage of the season, Man Utd occupy 15th position in the table, while Chelsea sit eighth, having played one more game than the Red Devils.

OPINION: They will come for heroic Rashford…we must stand with him

And Solskjaer has revealed that Mason Greenwood is set to return to action against Chelsea on Saturday, when captain Harry Maguire and new signing Edinson Cavani are also pushing to be involved.

“I hope and expect all three of them to be available for selection,” Solskjaer said.

“Of course we’ve got a training session this morning but, yeah, they’ve all got a chance, all of them.

“There’s two different reasons, so Edinson wants to tick all the boxes that he’s gone through in his programme and feel ready to make an impact.

“I think his last preparation was going to be today and then I’ll have a discussion with him, and it seemed positive yesterday with both Mason and Harry so hopefully.”

Jesse Lingard and Eric Bailly will be absent against Chelsea and for the next few weeks through injury, while new boy Facundo Pellistri will join Brandon Williams and Marcos Rojo in featuring for the Under-23s against Everton on Friday.

Anthony Martial remains suspended when Frank Lampard’s side visit Old Trafford, where you would not bet against Marcus Rashford shining once again.

The 22-year-old struck late to see off PSG in the Champions League once again, before continuing his fine work off the pitch aimed at preventing vulnerable children going hungry.

Asked if there’s anything left to say about Rashford, who was recently awarded an MBE, and the work he does, Solskjaer said with a laugh: “Probably not!

“But he’s now at a stage, we all speak about Marcus as this experienced boy and he’s 23 soon. He’s just between being a talent and being experienced, and you can see more and more of that experience coming out.

“We hope and we trust that Marcus’ background here, background with his family will keep him just developing and kick him on in his career.

“Now is around about the time that you’ll see him hopefully dividing himself from being a good player to being a very, very good player.”