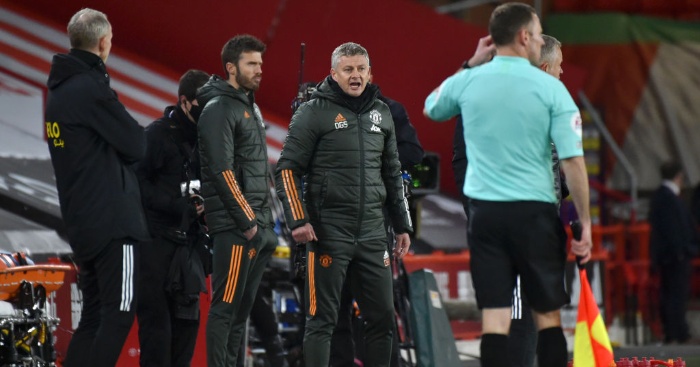 Ole Gunnar Solskjaer admits he went “overboard” in his clash with Chris Wilder in Manchester United’s 3-2 win over Sheffield United.

Tensions began to rise as the Blades poured forward in search of an equaliser in the dying moments of the game.

And Solskjaer and Wilder had a heated exchange on the touchline after a late tackle from Ethan Ampadu on Marcus Rashford.

“I don’t mind a fair tackle but there was a couple right in front of me,” Solskjaer told Amazon Prime Video.

“But it’s one of these games that these boys will learn from, it’s a proper game and it’s how football should be.

“I apologised, I went maybe overboard with a word but we’ll have a drink afterwards.”

Meanwhile, Wilder defended his players, insisting that they were fighting for a hard-earned point.

“We have to be brave, we have to get up the pitch, we have to make contact with good players,: the Blades boss responded.

“That’s what I said to the manager [Solskjaer] at the end. We’re not going to just stand off you like we did against Southampton. We have to go and make contact with good players.