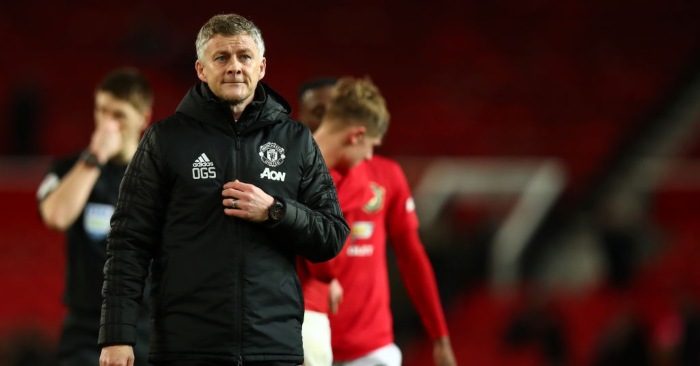 That sort of football, according to Ole Gunnar Solskjaer, is the version popularised by Pep Guardiola’s Barcelona side at the beginning of the last decade. With those passes. And that movement. And all of those goals.

Mainly, it’s that anyone still using that expression has being paying little attention to the way the game has changed. Football has broadened in unimaginable ways, even in a nation this insular. As recently as Wednesday night, an Aston Villa manager and a Sky Sports reporter were having a cheerful pre-match conversation about the use of a False No.9.

Twenty years ago that would have left most of us staring blankly at the television and frozen in open-mouthed confusion. Today, not so much. It’s accepted now that there’s no one way of doing things, that there’s no single way of playing. Everyone is drawing on inspiration from everywhere. Well, almost everyone.

“We have our own style and need to play with pace and power. Traditionally at United we are a team who attack quickly.”

In the beginning, Solskjaer’s loyalty to The Way Things Were was quite charming. Given that he was succeeding Jose Mourinho, a notorious cultural arsonist, his good ol’ days routine was actually restorative and probably even necessary.

But now it’s a year later. That initial goodwill has largely receded and with Manchester United bouncing rhythmically between only vague competence and passive uselessness, Solskjaer is starting to sound like a man completely out of time. Worse, actually, because he’s employing arguments which were used – for years and years – by those seeking ignorant shelter from England’s international decline.

It’s that same unfailing belief in something which doesn’t really exist. “There’s an English way of doing things and somehow,” insists the cliche with the St George’s Cross stencilled on his face, “despite all evidence to the contrary, that will always be a guarantee of superiority.”

Solskjaer isn’t quite saying that about United, but it’s becoming easier to draw lines between what he says in public and the limitations his side display on the pitch. It’s also interesting to note the difference between his ideals – pace and power – and the reality of their best performances. United don’t dominate anyone, even when they win. Some of their more notable results this season have depended on high energy, certainly, but not the kind of alpha, king-of-the-hill forcefulness to which Solskjaer alludes.

In fact, it could even be fair to say that United’s most common approach is to pray that their opponent under-estimates them. Their hope on Tuesday night, in the derby defeat at Old Trafford, seemed to be that Manchester City would commit all the same mistakes they did at the Etihad. They did not.

It cannot be coincidence that some of their biggest wins under Solskjaer have come when they’re least expected. Perhaps with their little moments of vigour and sly counter-attacking, they’re just football’s version of that thing – Eel? Ray? Shark? – that lies on the ocean floor, pretending to be dead and waiting for the right dopey fish to swim through its jaws.

That seems to be the strategy. The hope is that rival teams turn up so drunk on complacency (Tottenham) and schadenfreude (Liverpool) that United can nick a few goals while nobody’s watching and snatch the ascendancy.

The great irony, though, is that for someone who idolises Sir Alex Ferguson, Solskjaer doesn’t seem to have paid much attention to his work. United’s success during that period depended on Ferguson’s personality and his management of a talented group of players; but whatever lip service he may have paid to a United Way, he certainly couldn’t be accused of having a one-tone career.

Ferguson had the humility to recognise when his views of the game needed to be updated. That can be seen in the players he used, signed and sold, the formations he employed and even in the different assistant managers he appointed. Under him, Manchester United may not have quite been in a constant state of reinvention, but Ferguson was highly reactive to how football changed around him and, as a result, his various teams could never have marched – even loosely, even now – under the same banner.

At the moment, Solskjaer has no banner. There is no style, no anything. This United are only ever what their opponents’ flaws allow them to be. Perhaps we’re guilty of ascribing too much meaning to a flippant remark, but maybe that inertia is bred by the strange, binary situation which exists in his mind – the thick line between how United are ‘supposed’ to be playing and the brands of football being promoted by all the other, more successful teams.

He doesn’t want the ball. He doesn’t covet possession. He doesn’t want his team to stretch other sides with their rapid circulation and purposeful movement. He seems to reject principles which have become commonalities among all the leading protagonists in European football. Clearly, given their size, history and worth, that’s a stage that Manchester United would like to share.

By no measure, either in the way he thinks and talks about the game or the football he appears able to coach, does he seem like the right person to deliver that parity.