Home All The News Solskjaer: Man Utd strikers can learn from ‘frustrating’ Cavani 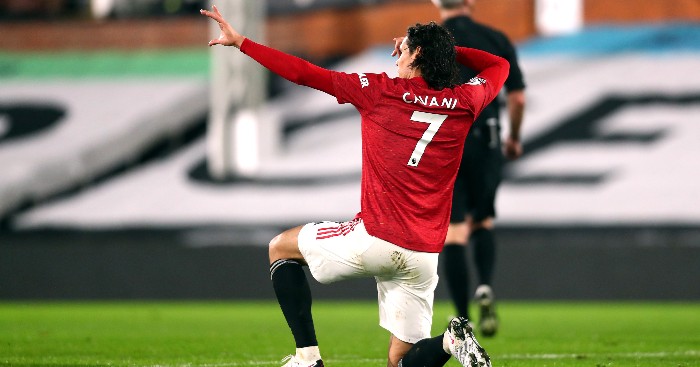 Ole Gunnar Solskjaer hailed Edinson Cavani as a centre forward other players can learn from, after he set Manchester United on their way to a 2-1 win over Fulham.

Cavani capitalised on a mistake from Fulham goalkeeper Alphonse Areola to cancel out Ademola Lookman’s sixth-minute strike. United’s win, which moved them back to the top of the Premier League, was sealed by a stunning Paul Pogba curled strike from outside the area.

The goal ensured the Uruguayan became the first United player to score their first four club goals away from home and earned Solskjaer’s praise.

“He’s a centre forward that you want in the box. His movement is incredible, it’s for everyone to learn from,” the United boss said.

“It’s almost like I get frustrated at times when he goes wide to put the crosses in because he’s the one that you want in there and sometimes I have to ask him to do less running but even in the second half, the header was a great save by Areola.

“He’s come down the side a few times and his movement is spot on, so he’s the type of centre forward that we’ve been looking for and he complements Marcus (Rashford) and Mason (Greenwood) and Anthony (Martial) really.”

Fulham slipped to their second successive league defeat, which leaves them in 18th place and four points from safety.

After a disappointing start to the season, during which Fulham conceded 12 goals in their opening five Premier League games, Scott Parker’s men have tightened up at the back, with just five goals scored against them in their last seven matches.

However, the Cottagers have struggled at the other end of the pitch, finding the net only four times.

“I think from the start of the season we see where we needed to improve as a team and the players have worked relentlessly on the training field to do that, to give ourselves a platform in games, to be more solid,” Parker admitted.

“Now that box seems to have been ticked really and now we need to look at the other side and how we can really take our chances in big moments in games because I think that will probably be the difference for us.

“But look, we’ve come out of a run now of nine games from Leicester away, to Manchester City, to Liverpool and Chelsea, the teams that are going to fight for the Championship this year and went toe-to-toe with them really, so very proud but a little bit disappointed.”