Home All The News Solskjaer: Martial has ‘matured in his behaviour’ 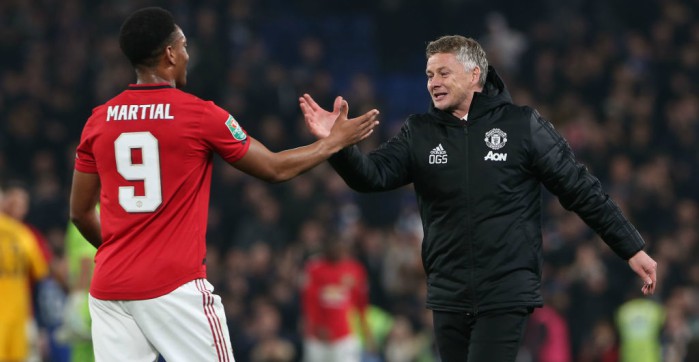 Ole Gunnar Solskjaer believes Manchester United are going to start getting the best of a more focused, mature and happy Anthony Martial.

The 23-year-old has been something of an enigma since arriving at Old Trafford from Monaco in 2015, having failed to capture the form shown during an exciting first season under Louis Van Gaal.

Jose Mourinho wanted to sell Martial having grown frustrated with the frontman, but successor Solskjaer is working well with the France international at Old Trafford.

The attacker signed a new deal running until 2024 at the start of the year and was given the number nine shirt back over the summer – a personal boost followed by a return of four goals in seven matches during an injury-impacted start to the campaign.

“I don’t think he’s had a long, long run of games as a number nine since he played many years ago as a young boy,” Solskjaer said. “Now he is maturing, he is (nearly) 24.

“I saw his interview the other day. You have to be obsessed with scoring goals as a number nine and he’s looking more and more like a player who wants to score goals and not just showing his tricks.

“For me, he has matured a lot in his behaviour on the training ground as well, so I believe we are going to see the best of him in the next few years.

“He looks happier. He seems happy. He’s such an infectious boy – his smile and sense of humour. You see he is happy here and that rubs off on everyone and it’s great to see.”

Put to Solskjaer that Mourinho thought United saw the best of Martial when he was smiling, the Norwegian said: “Yeah, but that is what I am talking about – the whole group as well.

“That mood… it’s miles, miles better on the training ground. They encourage each other.

“It’s nice to be a coach and a manager when you see them come out and wanting to do extras, so we are improving.”

Solskjaer believes the culture has markedly improved this season, with this group “miles better” thanks in small part to “the camaraderie, the attitude of the boys, the selflessness, the humility”.

Three successive away wins ahead of Saturday’s trip to Bournemouth have also helped bring the confidence displayed in spades by Marcus Rashford after a sticky start to the campaign.

The forward is linking up well with Martial and has scored five in as many matches for club and country, but Solskjaer is not afraid that he has overplayed the forward after leaning heavily on him so far.

“He doesn’t want a rest! I’ve been able to rest him a couple of times in Europe but he’s such a fit boy, a professional boy, looks after himself” the United boss said of Rashford, who is a doubt this weekend due to a knock sustained in Wednesday’s win at Chelsea.

“Hopefully he had loads of sweets last night on his birthday, so the energy levels are up.

Harry Maguire and Victor Lindelof are also doubts for the trip to the Vitality Stadium, while Solskjaer rejected talk that Rashford’s knee-slide celebration at Stamford Bridge caused his issue.

“Yeah, well not the knee slide, I think,” he said. “It was a tackle. But anyway, hopefully he will get through and be ready for tomorrow.”

Rashford is one of numerous academy graduates that United have put their faith in this season.

Angel Gomes and Tahith Chong have yet to hit the heights some have managed, but Solskjaer predicts a bright future for a duo he hopes will stay beyond the end of the season.

Asked if he expects them to commit anytime soon, the United boss said: “Well, we hope so. We’ve had lots of conversations with the boys.

“Obviously their contracts run out in the summer, but we want them to stay.”