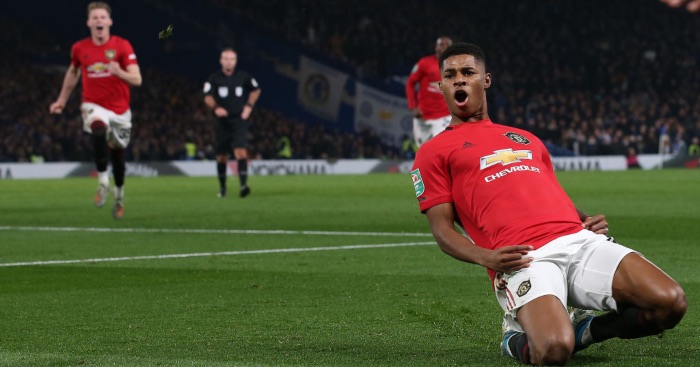 Rashford crashed in an unstoppable drive from 30 yards to secure a 2-1 win at Chelsea and a place in the last eight.

Chelsea had hauled themselves level through Michy Batshuayi after Rashford opened the scoring from the penalty spot.

But the England international’s stunning free-kick ended Chelsea’s seven-match winning streak and made it three wins on the bounce for United.

“We’ve travelled a lot in the last week,” Solskjaer said on Sky Sports. “We’ve got a good team spirit and camaraderie. It shows the character of the team.

“We get the games where we want them. We’ve been leading 1-0 in many games and not kicked on. Today we were excellent, with fast flowing football. That’s Manchester United. We’re trying to get back to that.

“Marcus has that strike in him. I’ve seen him in training so many times.

“When you give young lads the experience, like Brandon Williams got tonight – and the kid was outstanding – it’s only going to help them.

“We know we’re not the finished product, we’re a work in progress and keep trying to improve.”

Defeat meant Chelsea failed to get a measure of revenge on United for their 4-0 defeat on the opening day of the season.

The teams have gone in opposite directions since then, with United struggling for form while Chelsea are fourth in the Premier League and joint top of their Champions League group.

However, United took a 25th-minute lead after Daniel James won the spot-kick, the winger getting across Marcos Alonso in the area before tumbling to the deck.

Rashford may have missed a penalty against Norwich at the weekend, but he showed no sign of nerves as he calmly sent Willy Caballero the wrong way.

They got their equaliser on the hour mark, Batshuayi nodding on Caballero’s clearance before turning away from Harry Maguire.

The Belgian frontman outstripped Maguire and Victor Lindelof before firing past Rojo and into the corner of Sergio Romero’s net.

But Rashford settled the match in the 73rd minute in spectacular fashion, lifting his shot over the wall and underneath Caballero’s crossbar before sliding on his knees in celebration in front of a delirious away end.