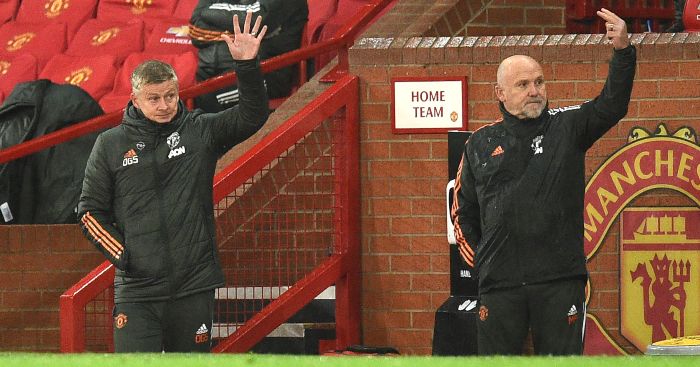 Ole Gunnar Solskjaer blamed a busy fixture list and the lack of fans on Chelsea being able to hold Manchester United to a draw at Old Trafford.

United remain without a home Premier League win this season after following up defeats to Crystal Palace and Tottenham with a stalemate against Chelsea.

The hosts had 14 shots to Chelsea’s six – four on target to just one – but were unable to find a way past Edouard Mendy.

Frank Lampard aired some justified complaints about VAR after Harry Maguire decided to monkey scrub Cesar Azpilicueta, while Solskjaer put United’s “sloppy” start down to the influx of games, and suggested supporters in the stadium would have spurred them to victory.

“I think [it was] two teams that played in Europe this week,” he told Sky Sports. “I think that showed a bit, the first half wasn’t the greatest.

“I think in the second half we pushed on, and if the Stretford End is full we might get some help and get that ball over the line.

“If we’d had that stadium and the Stretford End full, we could have created more pressure and more urgency because that was lacking.

“You’re here watching the game and it’s a different sport, and with the fans here they help you. We miss them, we have to say. It’s the same for all teams, but I think everyone agrees football is a little bit less, the edge has gone.

On the fixture schedule, he added: “It’s going to be relentless. The players are tired, they play loads of internationals, come back and play every three days again and after PSG last time, we had a big dip. This time around we’ve started with a good performance.”