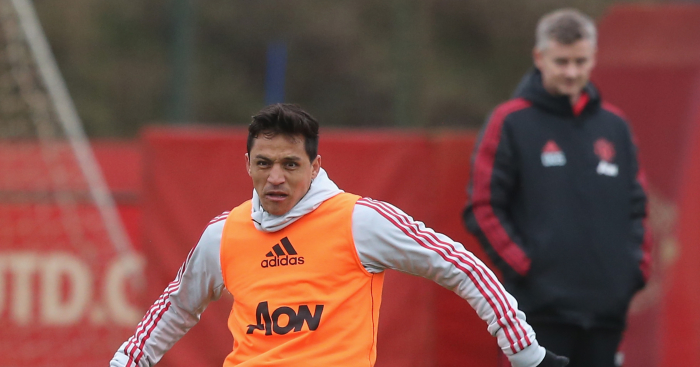 Ole Gunnar Solskjaer says Alexis Sanchez will return from injury against Newcastle and is “champing at the bit” to finally show Manchester United fans what he is all about.

A lot has changed at Old Trafford since the 30-year-old’s last appearance five weeks ago.

Laid low by a hamstring injury, Sanchez watched on as Jose Mourinho lost his job after United went on a downward spiral that Solskjaer has got them out of in some style.

The Norwegian has overseen three straight wins and a 12-goal haul since taking over as caretaker manager, bringing hope and optimism back to the club entering 2019. They made our winners list again.

United kick-off at Newcastle on Wednesday evening, when Sanchez is in line to make his first appearance since November and start making amends for a dreadful first year at Old Trafford.

“He’s had some great training sessions the last few days, he wanted to be here today, but we have to manage him,” Solskjaer said of last January’s big-name signing. “He’s been out for a month.

“But he’ll be involved, yes. He wants to play all the time, he’s one of those characters.

“He put himself available, but it was a few days too early for him. He’s not had enough fitness or whatever, but he’s champing at the bit.

“I think he’s a player that would benefit from the interchanging, the rotation, the movement.

“Of course, the more chances you create, the more times you get the ball into the final third, he’ll be an asset for us – on the floor, in between or in behind.

“I think he’s looking forward to it – it certainly looked like it (on Saturday) in the session because he scored quite a few nice goals so that was encouraging.”

Sanchez adds another dimension to United’s improving attack, which is finally displaying the kind of confidence and freedom fans became accustomed to under Sir Alex Ferguson.

Solskjaer is putting the lessons learned under the Scot to good use and still leans on his mentor, who was at Saturday’s training session on the eve of the 4-1 defeat of Bournemouth.

“I’ve had him for 15 years, so obviously he’s influenced me more in those 15 years than he’s done last week,” said the Norwegian, whose goal in the Champions League final sealed the treble for United in 1999.

“But obviously I do keep him informed and he did pay us a visit and I think he enjoyed his time at the training ground.

“We had a nice few chats, us and the staff, and he encouraged us.

Solskjaer, unlike his predecessor, actually looks like he is enjoying the job at hand and is ready fora tough test yet at Newcastle.

“I want Man United to look like this when I’m here,” he said, reflecting on Bournemouth.

“Of course, we’ll get tougher tests than this, for example on Wednesday against Newcastle.

“It’s a different ball game because you’re away. I never enjoyed going up there. There was one game where we really enjoyed ourselves, the 6-2 win, but that was more or less it.

“It’s going to be a tough one. We need to keep clean sheets. We’ve not done that so far. There’s loads we need to work on, but this is the way we want to see ourselves attacking.”

It is a case of so far so good for a man whose only previous managerial job in the Premier League came as Cardiff were relegated in 2014.

“I’ve spent 15 years here and that’s just me. I’m just seeing all these people when you walk through the corridors here. It’s me. I am comfortable in the environment.

“It’s up to you to rate me if I’m up to the level but I’m definitely enjoying my time back home.”