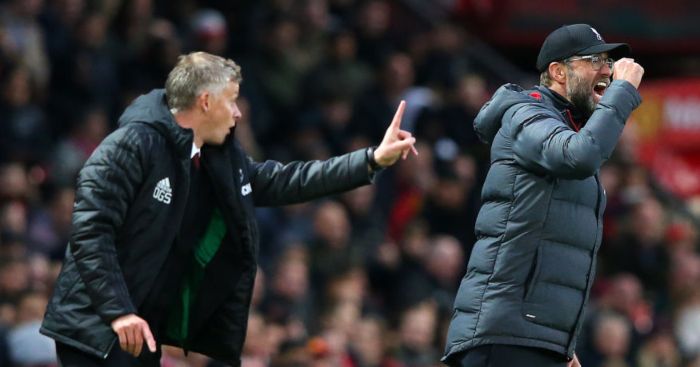 Ole Gunnar Solskjaer ‘privately acknowledges’ he will not be given the same amount of time to succeed at Manchester United as Jurgen Klopp had at Liverpool.

Perhaps it’s because Klopp improved his team exponentially in the short and long-term while Solskjaer has arguably regressed.

The Mail on Sunday claims that Solskjaer is aware ‘he will not be given three years to win a trophy,’ and could be sacked if United’s performances and results do not improve by the end of the season.

England manager Gareth Southgate is among the contenders to replace him at that point, with any potential appointment coming after Euro 2020.

The Mail quote senior United sources as citing the ‘Kenny Dalglish scenario’ – a club legend making way after a transitional period for the club to progress further.

And that really is quite ridiculous for so many reasons.

The availability of Mauricio Pochettino continues to be ignored in favour of Southgate, whose ‘policy of promoting youth,’ status as ‘a responsible figurehead’ and admiration for ‘the way the club develops players’ stands him in good stead.

Ed Woodward has also been ‘impressed’ with how England have ‘evolved’ under the 49-year-old.

The Mail on Sunday’s report conflicts with claims from The Sun on Friday. Neil Custis, along with doing the bidding of former colleague Neil Ashton, stated that Solskjaer’s job was ‘safe’ – even if United failed to qualify for European football next season.

The club feel they have ‘invested’ too much time, money and patience into the Norwegian’s much-vaunted ‘cultural reboot’ to back out at such an early stage.