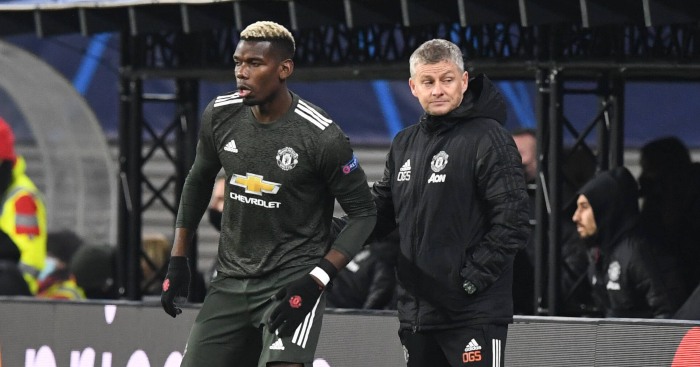 Here’s what Custis wrote way back when this incredibly elongated ‘end’ was just beginning:

‘You don’t question the boss, not one as good and powerful as Mourinho.

‘Now surely the exit door that was creaking open is now hanging off it’s hinges with Barcelona waiting to pounce.’

Even if we ignore the errant apostrophe, that was spectacularly wrong. Within three months, the exit door swung open and that ‘good and powerful’ boss was pushed out. A few months later, Pogba was named in the PFA Team of the Year.

Two years on, Pogba is still there and has survived many, many Custis attempts to push him through that door.

‘PAUL POGBA’S Manchester United career is over with both player and club desperate for a parting of the ways’ – Neil Custis and Richard Moriarty, The Sun, January 3.

‘PAUL POGBA has been given the green light to leave Manchester United’ – Neil Custis, The Sun, February 7.

‘PAUL POGBA’S Manchester United career is over. Despite suggestions that a peace deal is being made, both sides want a splitting of the ways’ – Neil Custis, The Sun, March 19.

And now the back page of The Sun is telling us – exclusively, obviously – that ‘Fed-up Manchester United chiefs want Paul Pogba out of the club’, as if Manchester United have taken control and somehow won this battle to, erm, give Pogba the transfer he desperately wants at a cut-price fee of £50m which probably means that clubs can afford him. That will bloody show him.

Do you know the way to sack Jose?
There is some wonderful re-writing of history from Neil Custis, who is now happy to blame Paul Pogba for the sacking of his beloved Jose Mourinho.

‘He probably cost Mourinho his job when the former United manager axed Pogba from his team and stripped him of the vice-captaincy.’

It probably had more to do with Manchester United having won just one Premier League game in six, leaving them 19 points behind leaders Liverpool and 11 points shy of a Champions League place.

Or, as Custis himself wrote when Mourinho was actually sacked:

‘IN THE END the pressure on the Manchester United board did it for the manager.

‘It was the constant suggestions that he hadn’t been backed in the transfer market that irked the likes Executive Vice chairman Ed Woodward and the Glazers.

‘Those who did not want to turn on the players and the boss were more than happy to point fingers at the directors box.

‘Yet behind the scenes they shook their heads.

‘They questioned how a £400million outlay on 11 players had ended in this.

‘It should have been better than this.’

Two years – and a new Manchester United PR machine later – and the message is that the fault lies entirely with Pogba. Just as it was entirely his fault that United lost to Leipzig on Tuesday. Can we also blame him for Covid?

The blame game
Elsewhere in The Sun, Custis writes – via a potted history of Sir Alex Ferguson’s ruthless decisions – that Ole Gunnar Solskjaer needs to drop David De Gea. Which is fair, but he does include these sentences:

‘His error in conceding the crucial third goal in Tuesday’s 3-2 defeat to RB Leipzig was the final straw.

‘Could you even call it an error? He just did not fancy the situation as the ball came across his six-yard box in the 69th minute.

‘Do not blame Harry Maguire — he let the ball go believing that any goalkeeper would already be off their line and ready to scoop it up.

‘Not De Gea, who appears to be nailed to his line when danger threatens.

‘As it was, he still had the chance to come out and smother the ball to deny Justin Kluivert.

‘Instead, he was half-hearted and turned his back on him.

‘The former Red Devils midfielder said: “He bottles it. He’s scared of getting himself hurt. He turns his back away and makes himself smaller.

‘“It’s criminal for such an experienced goalkeeper.”’

Odd how Custis misses out the part of the Scholes quote where he says “Harry Maguire is wooden and stiff” to suit his narrative that the record Solskjaer signing is in no way to blame.

Appealing facts
In the Daily Mirror, we are told that ‘Harry Maguire’s arrest in Mykonos over the summer – which saw him charged with aggravated assault – was appealed successfully’.

No it wasn’t; he won the right to an appeal that is yet to be heard. It’s a pretty important clarification. You will be telling us next that he has successfully appealed against being called “wooden and stuff”.

Man likes friend
Join us in astonishment as we peruse the back page of the Daily Mirror to see that ‘PETER SCHMEICHEL has urged Manchester United to stick with under-fire boss Ole Gunner Solskjaer’.

Wake us up when an old Manchester United teammate of Solskjaer does something other than back his friend.

So who has said that Man Utd have ‘set surprisingly low asking price’, then? Who are they quoting? Let’s begin…

‘Manchester United have set a surprisingly low asking price for Paul Pogba ahead of the January transfer window, according to reports.’

‘There is a strong belief that despite crashing out of the Champions League on Tuesday at RB Leipzig, United can mount a title challenge this season. The executive are disappointed to be in the Europa League, but Solskjær’s win ratio and ongoing rebuilding of the squad, which has impressed them, mean he retains their support.

‘It is seen as significant that when United host Manchester City in Saturday’s derby they will be only five points behind the joint leaders, Tottenham and Liverpool, with a match in hand and that the club remains in contention in four trophies.’

It also seems slightly significant that Manchester United are yet to play in two of those trophies and have already exited one competition, but Jackson has books to sell so carry on…

‘The manager’s recruitment of Bruno Fernandes in February is regarded as a catalyst: since then United are second only to Liverpool for points won. After 10 Premier League matches this season United’s 19 points and 19 goals is better than the 13 points and 13 goals last term, when they finished third.’

That was Manchester United’s worst start to the season in 33 years so it’s not a great comparison. Also, it might be worth noting that United have conceded 17 goals in comparison to last season’s 10 at the same stage, but Jackson has books to sell so carry on…

And they sacked Mourinho (though of course that was Pogba’s fault).