Home All The News Solskjaer ‘proud’ of players after Southampton fightback 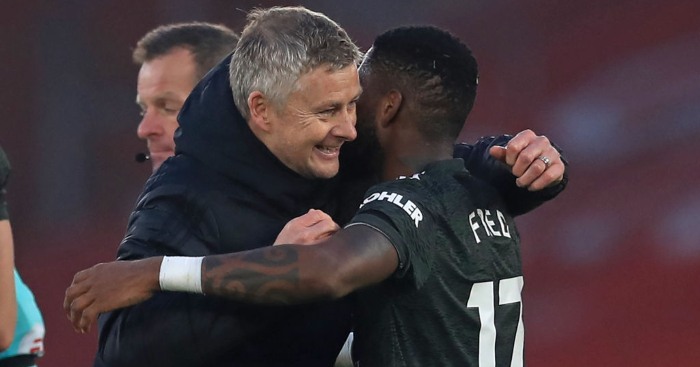 Edinson Cavani scored a brace off the bench to secure Man United and Ole Gunnar Solskjaer an unlikely victory over Southampton.

Manchester United had chances in the first half, but they went into the break two goals behind. Jan Bednarek opened the scoring with a header from a corner.

Not too long after, James Ward-Prowse doubled Southampton’s lead via yet another direct free kick.

David De Gea had to be subbed off at half time due to injury. Dean Henderson came on in his place while Cavani also came on for Mason Greenwood.

The Red Devils got themselves back into the game just shy of the hour mark. Bruno Fernandes finished well inside the area after he was set up by Cavani.

With 15 minutes to go, Cavani got a goal of his own as he directed Fernandes’ deflected shot into the net. It looked like the sides would have to share the points. But the former PSG striker struck again in stoppage time.

This time he was set up by Rashford who sent a dangerous cross into the area. Cavani’s diving header went in past Alex McCarthy to snatch the win for United.

This victory shoots Man United up to seventh in the table with a couple of games still to go this weekend. They have a game in hand on teams above them and they are currently five points off the top of the league.

Solskjaer spoke with Sky Sports, as cited by BBC Sport, post-match and he was full of praise for his side after they completed the comeback:

“Let’s have a little check on him (David de Gea). Hopefully, he can be okay for Wednesday but I’m not sure. Dean (Henderson) played well though.

“He’s a keeper who has been used to being vocal. He wants to organise the team. He had a couple of tidy saves to make and he was safe with his hands. After the first half, we played well again.

“It’s one of those that when you win, they don’t really matter. In the end, I was so proud at 2-2 because we did so well.

“He probably wasn’t able to warm up on the pitch and then he realised he needed bigger studs. He has to be ready!

“This team is getting better and better and improving which is what I want to see. We are fit.”