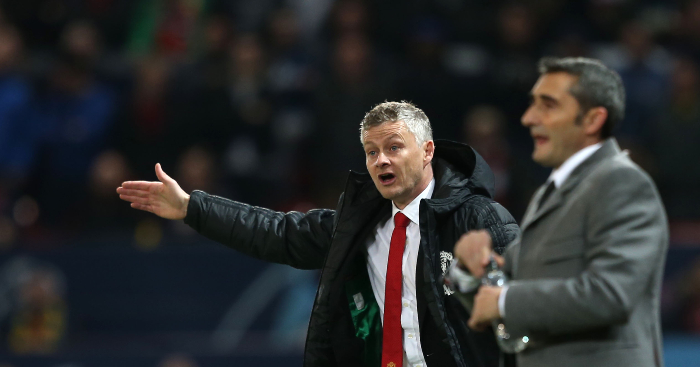 Ole Gunnar Solskjaer has praised Scott McTominay after his performance in Manchester United’s 1-0 defeat to Barcelona.

The visitors got the only goal of the game after Luis Suarez’s header deflected in off Luke Shaw, but United grew into the game and kept Lionel Messi quiet.

McTominay, in midfield alongside Fred in place of the injured Ander Herrera and Nemanja Matic, was particularly bright once the hosts settled into the game.

“Scott McTominay was fantastic,” said Solskjaer, speaking to BT Sport after the match.

“Every time he plays for us he is improving. He’s a great athlete, wins his challenges and quick on his feet. He started settling us to be fair.

“We played a good team. We know you have to defend a lot without the ball and you might be tired when you get the chance yourself. We go there with one thing in my mind, we have to score.”

Marc-André ter Stegen didn’t have a save to make as United put all ten of their efforts off-target, but apart from David de Gea denying Philippe Coutinho with a good save, the visitors were largely left nullified.

Messi has 44 goals for Barcelona this season, and has been playing as well as he ever has in the run-up to this tie, but he had an off-night as he was shackled by Manchester United’s midfielders.

“We did as well as we could against Messi, kept our shape well. It could have gone both ways. I don’t think we hit the target and that’s a disappointment,” Solskjaer added.

“We go there with work to be done but chances.

“We’re playing against a great team. It’s a tough one, we’ll go there with the knowledge we can score over there.”