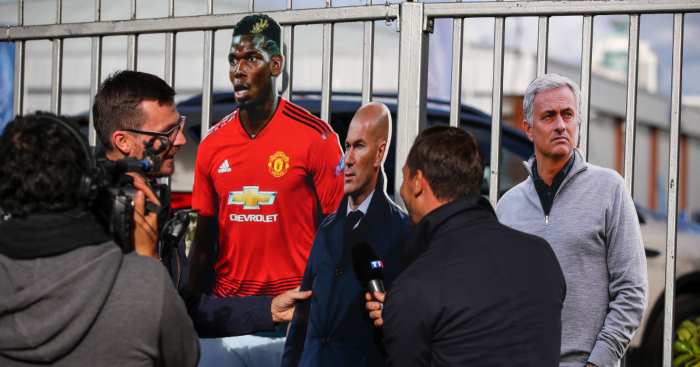 Ole Gunnar Solskjaer has responded to rumours about Paul Pogba’s future after he was pictured with Real Madrid boss Zinedine Zidane in Dubai.

The Manchester United midfielder was keen on a move away from Old Trafford this summer and his situation is being monitored by a host of top European clubs including Juventus and Real Madrid.

However, a report in the Daily Express on Friday showed a picture of Pogba speaking to Zidane while in Dubai over the international break.

The report continues by saying ‘the pair ran into each other on the beach on Sunday night’ but that hasn’t stopped people blowing it out of proportion.

Solskjaer told reporters on Friday morning: “I’ve not heard Paul Pogba say he doesn’t want to be here. Paul is part of our plan going forward.

“He has been playing through the pain-barrier. He has been criticised left, right and centre, but when he came back against Rochdale and Arsenal he could’ve easily not played.

“He wanted to play, he wanted to try to get back and it was too painful. He’s had a scan, he’s on the way back and he’s been on a few days off, working but he is away from here.

“And then there is a picture and being at Manchester United you do get pictures and speculation – but I don’t have any problem with that at all.”