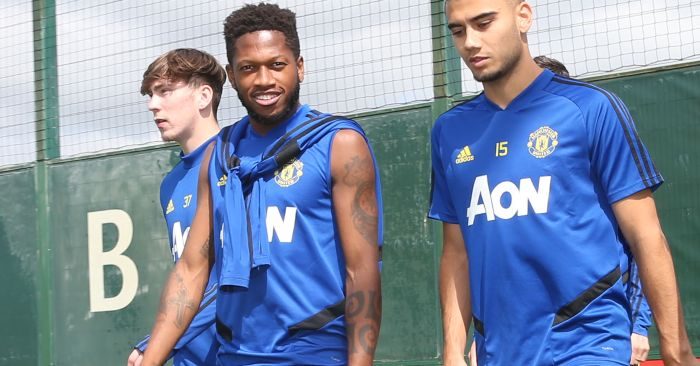 Ole Gunnar Solskjaer says he has seen enough to believe that Fred can kick on during his second season at Manchester United.

The Red Devils bought the Brazil midfielder from Shakhtar Donetsk a year ago but the 26-year-old struggled to justify the £52million investment during his first year in the Premier League.

United are keen to strengthen their midfield having lost Ander Herrera and Marouane Fellaini in recent months but Solskjaer is hoping Fred can save the club money by offering an improvement this term, despite being linked with a move to Galatasaray.

“I think you’re not surprised when a player from Brazil who’s played in Ukraine finds it a little bit hard in the beginning,” Solskjaer said. “But we know the talent is there we’ve seen towards the end of the season what Fred can give us, the PSG game, Arsenal, Man City.

“And, of course, he’s one that we hope is going to take another step this season. Hopefully him missing 10 days of pre-season won’t set him back too much.”

Fred missed the opening stages of United’s pre-season tour because he was given special dispensation to stay behind. The Brazilian organised his wedding around an international call-up which never came from Tite so he and Matteo Darmian have only just joined with Solskjaer’s squad.

“Today, obviously, we’re going to have to see where they’re at,” the manager said. “They’ve been training back home and Fred has been back over in Brazil and had his wedding and got married, so he’s probably got loads of energy and I’m sure he’s keen to join in.”