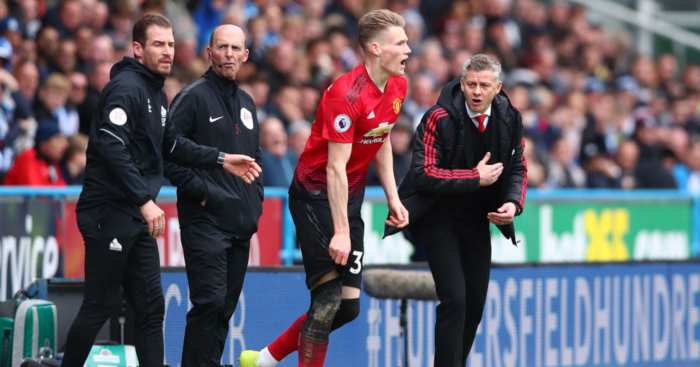 Ole Gunnar Solskajaer will build a new-look Manchester United team around one player, according to reports.

The Daily Mirror claims that the Norwegian wants United youngster Scott McTominay to be at the heart of his Old Trafford rebuild.

McTominay has been one shining light for United fans in an otherwise poor season as they have failed to qualify for the Champions League or win any silverware.

He was one of the only players to come out of the weekend’s 1-1 draw against Huddersfield, while he has made 21 appearances this season in all competitions and scored twice.

The report in the Daily Mirror adds that ‘Solskjaer sees McTominay as an automatic starter next season and a key figure in his rebuilding project’.

The Red Devils are likely to lose Ander Herrera – who has been linked with a move to PSG – this summer while there have been rumours circulating that Paul Pogba could also be on his way out.

Following United’s 0-0 draw with Liverpool back in February, Solskjaer hailed McTominay as “a ‘Darren Fletcher’ for us, absolutely fantastic”.

The report continued: ‘Solskjaer has been impressed with McTominay’s reading of the game, passing range, attitude and commitment, which he feels many of his more established players would do well to emulate.’

McTominay committed his future to United in January, signing a new contract which runs until June 2023 with an option for a further year.

The academy product told the club’s website at the time: “Manchester United has been my life since the age of five and playing for the club I’ve always supported is all I’ve ever wanted to do.

“I’m still young and I’m learning all the time from the manager, his coaching staff and from the world-class players in the squad.

“I can’t wait to continue my progress at this great club.”