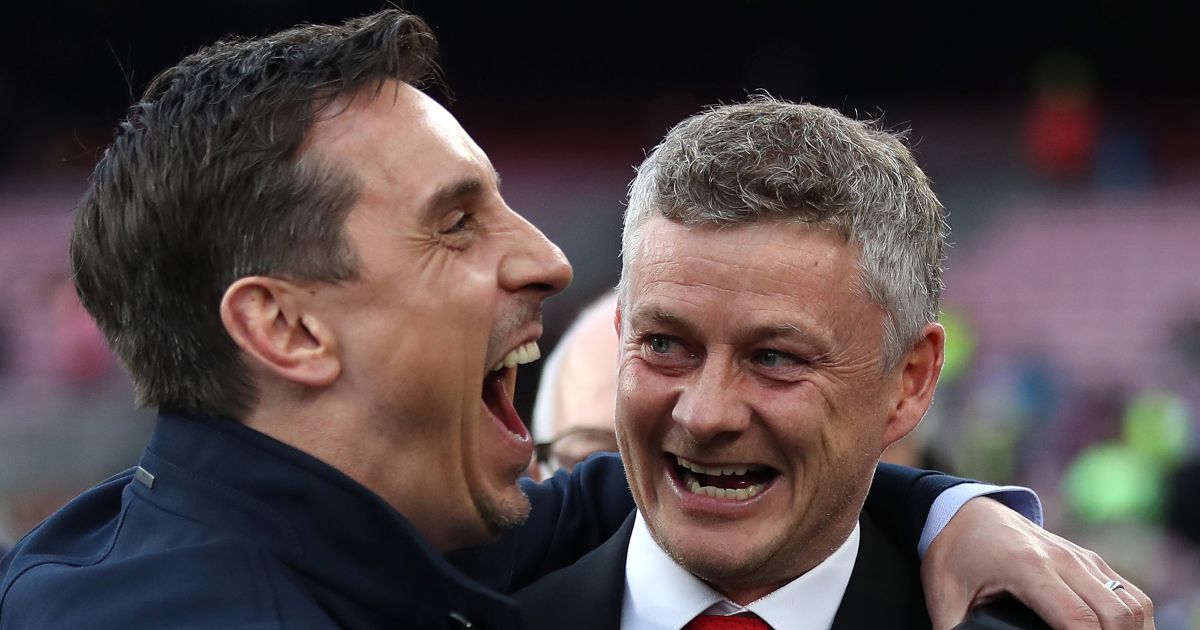 Ole Gunnar Solskjaer wants Gary Neville to ‘tone down his rhetoric’ after the recent protests from Man Utd fans, according to reports.

Having controversially taken over at the Red Devils in 2005, the already despised owners’ botched attempt to join the breakaway European Super League brought anger against them to a new level.

MAILBOX: What kind of wrong ‘un believes the Glazers are good?

A few hundred of those got into the stadium and invaded the pitch during the protest, while another group made their frustrations clear at the Lowry, the team hotel in the city centre.

Neville was widely praised for his outspoken comments on the European Super League and the six Premier League clubs which formed part of the breakaway competition.

But former Crystal Palace chairman accused Neville of “calling on a lynch mob” after the former England defender backed the actions of the Man Utd fans who stormed Old Trafford and advised the Glazer family to sell the “rotting” club.

And now the Daily Mail claims that ‘Solskjaer and his coaching staff are understood to be unhappy over Gary Neville’s role in the anti-Glazer backlash’.

The report adds that Solskjaer and his colleagues were ‘upset over the postponement of the game against Liverpool and believe that Neville needs to tone down his rhetoric to avoid further unrest’.

Speaking on Wednesday about the postponement, Solskjaer told reporters: “It was a difficult day for us..

“Of course we wanted to play, we wanted to beat Liverpool for the fans because our job has to be getting good performances, good results on the pitch.

“That’s the players’ focus, that’s my focus but, as I said before the game, we have to listen.

“Unfortunately, when you break in, when police officers get injured, scarred for life, that’s too far. That’s one step too far.

“When it gets out of hand like this, it’s a police matter. It’s not about showing your opinions anymore.”

One of the protesters outside Manchester United stadium Old Trafford says the protest “isn’t just about the European Super League”, adding that the Glazer family, which has controlled the club since 2005, “need to go”.

A Greater Manchester Police spokesman said on Tuesday that six officers were injured as flares were let off and bottles thrown, with one sustaining a fractured eye socket and another a facial wound.

Solskjaer added: “The right to protest peacefully, everyone’s got a human right to be heard and a voice to be heard, but it has to be peaceful.

“When you step out of line, when you break into, on to the pitch and into dressing rooms, I think that’s one step too far and when it becomes police matters that’s not nice.

“It’s not been helped by certain individuals. I have to say that’s another part of it. But that’s your end of it (in the media).”