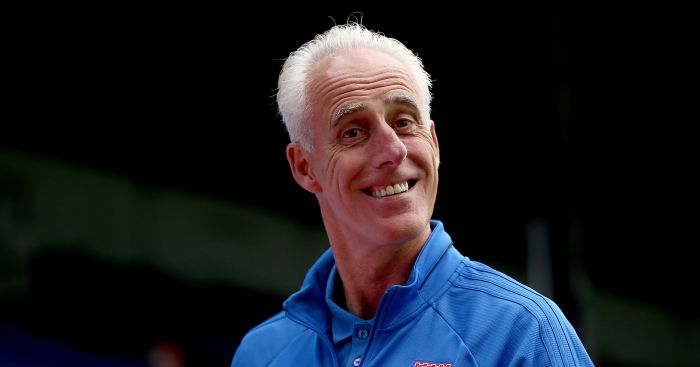 Mick McCarthy has announced that his beautiful journey with Ipswich is over. Perhaps he will treat us to some more gems before his departure this summer.

20. Mick described Chris Coleman’s job at Sunderland as “like trying to turn around an oil tanker with a canoe paddle.”

19. Replying to a reporter informing him that his side received “no yellow cards today” in a match against Manchester City, Mick said: “No, and I asked all the lads to go out there and knock seven bells out of everybody as well like I normally do. Shame that, isn’t it? They went out there and played free-flowing football and were rampant for 45 minutes. What were they playing at?”

18. Mick was asked whether he was pleased to see Steven Gerrard returning from injury while at Wolves, he said: “Delighted. Bring [Graeme] Souness and all them back, see if Kenny and Rushy can come back. I’m delighted that they get all their best players back. I’m thrilled that the cup competition meant that Charlie Adam and Martin Skrtel can play. It’s great isn’t it? I’m delighted for them. I don’t want to go there and win, I want to let them play and have all their good players in the team. It’s great.”

17. During his first press conference as manager of Wolves, Mick said: “At the moment we’ve got 16 first team players. My initials stand for Mick McCarthy, not Merlin the Magician.”

16. When asked if he was worried if Wolves would lose their better players if they were relegated, Mick simply answered: “We’re not getting relegated.” And they didn’t, too.

15. “That’s a b*****ks booking. We might as well all pack in and stop doing it. It was a fabulous tackle,” was Mick’s reaction to Stephen Gleeson seeing yellow for a 50/50 challenge.

14. Appearing as a pundit at the King Power Stadium in 2013, Mick said: “Really thrilled to be coming back to Leicester because we got d**ked by six here when we came.”

13. In response to a reporter saying “some people may see that as two points dropped” following Ipswich’s 2-2 draw at Leeds back in 2014, Mick replied: “Some people can f**k off.”

12. After George Elokobi gatecrashes his interview with the BBC following Wolves’ relegation survival in 2011, Mick reacted brilliantly: “If it wasn’t Elokobi I’d have killed him.” The reporter then asks: “You don’t argue with him?” To which Mick responds: “No no, not at all. He’s my body double, have you seen him?” Before lifting up Elokobi’s shirt. Wonderful.

10. No stranger to an expletive-ridden rant, Mick saved possibly his best after a match against Reading in January 2009 when he was asked what he thought about a Wolves own goal after just 60 seconds.

“F**king abysmal, that was what I f**king thought of it. C’mon, let’s get to it, I’m trying my best here. What did I make of it? I thought it was the best bit of f**king football I’ve seen in a long time. Do me a favour. It was a crap start to a game. There you have it, can you print all that? F**king rubbish, absolute tosh. Drivel. Sh**e. Bulls**t. That’s what I thought of it. Did that help? I’m quite pleased, apart from the fact that’s given them the poxy result, I’m f**king livid about it – of course I am. So, there you have it.”

9. “I thought I had seen it all when it comes to the fickleness of football folk. Then I heard Spurs fans singing ‘There’s only one Alan Sugar’.”

8. The Sunderland boss on a 1-0 defeat to Birmingham in 2005: “Before the goal it was two rubbish teams playing rubbish football.”

7. “I started [trying to give up alcohol] on Shrove Tuesday and then by Ash Wednesday something had happened and I’d had a bottle of beer.”

6. “Every single one of the players has been slapped around the head but they keep coming back for more.”

5. “Opinions are like backsides, we’ve all got them but it’s not wise to air them in public.”

4. When Mick was asked what went wrong in Sunderland’s 3-1 defeat to Aston Villa, he said: “I haven’t got enough time to tell you – Match of the Day only lasts an hour and 20 minutes, doesn’t it?”

3. After Republic of Ireland’s exit from the World Cup in 2002, Mick said: “No regrets, none at all. My only regret is that we went out on penalties. That’s my only regret. But no, no regrets.” Hmm? What’s a Saipan?

2. Said Mick of Niall Quinn while Republic manager: “Anyone who uses the word ‘quintisentially’ in a half time talk is talking crap.”

1.“I told the Millwall chairman that if he ever wants to sack me, all he has to do is take me into town, buy me a meal, a few pints and a cigar and I’ll piss off.”