Home F365 Says Mourinho and Son: In the business of success 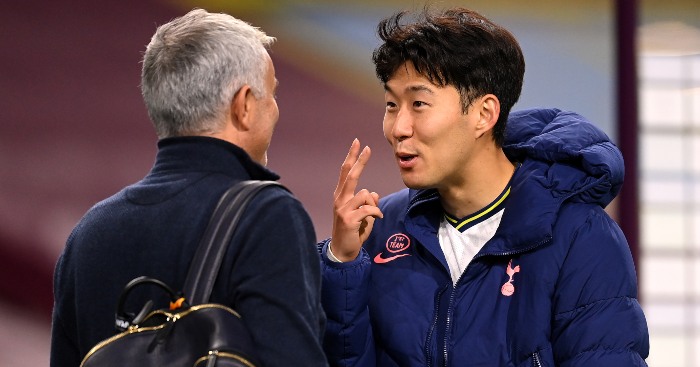 We’re not saying that Jose Mourinho is predictable but a year ago this week – back when fans were allowed in stadiums and managers were sacked – we wrote a list of five Tottenham players who should fear the worst from their new manager. One has left; another has been ostracised; yet another has been side-lined. Our glib ‘[Insert name of young player]’ option has also proved prescient as not a single player under the age of 23 has played Premier League football for Spurs this season. The exception on the expected sh*t-list? The player who perhaps should have feared the worst but has actually soared? The extraordinary Son Heung-min.

In hindsight, the argument was slight, based on Son’s perceived sensitivity and emotional fragility, which seemed best suited to the soft touch of Mauricio Pochettino. It ignored what has become apparent over the last two seasons – that Son has a steel-strong competitive streak on the pitch that can tip over into nastiness. He is actually the perfect Mourinho player, with boundless supplies of energy allied with exceptional talent and a desire so intense it hurts. And it seems like he might have been waiting for this manager all his life.

Son is only kept off lists like these by an Asian Games triumph that means little outside of Asian games. Really, Son has won f*** all and no footballer that talented should have reached 28 without a trophy; certainly, there was no other footballer on the last Ballon d’Or list in the same position. When I wrote in May that Son would be a no-brainer transfer target for Manchester United, it was only partly because ideas were so very scarce after two months with no football. What we did not foresee – when looking at a table frozen with Tottenham in eighth – was that he would have a better chance of breaking that duck at Spurs than United.

Should Spurs fail, it will not be because Son has failed. Under Mourinho, only Harry Kane has scored more than his 20 goals and nobody has assisted more than his 14. Tellingly, both Son and Kane are scoring more regularly under Mourinho than their beloved Pochettino; Son is already on the cusp of his fifth consecutive double-figure Premier League goalscoring season. As Mourinho himself says: “Season after season after season, Sonny is showing how good he is.” Were he Brazilian, he would be a superstar. But were he Brazilian, he might not be at Tottenham and he might not be on the verge of committing the bulk of his career to a club outside the elite.

It will not only be the promise of £200,000 a week that will keep Son at Spurs but the very real prospect of trophies under Mourinho. Neither would turn their nose up at either a domestic cup or Europa League, with Son saying last month of his manager: “He has a winning mentality and we all believe he can bring us success and take us to the next level. Now we are together for one year and it has been fantastic. I just want to keep this feeling and achieve success with him.”

The player who seemed so ideally suited to the Pochettino regime now appears tailor-made for Mourinho, who he describes as ‘misunderstood’. Us too, Son. We predicted that this particular pair would be incompatible but they could actually be key to ending a 13-year trophy drought.